ELIZABETH: hey, could you please not smoke? I really hate the smell. Also, my dad is dying of lung cancer and so it’s a pretty sensitive issue.

PHILIP: [lounging on a golden sofa] do I have to give up EVERYTHING for you? UGH.

PHILIP: I don’t understand why we can’t live at Clarence House. I want Clarence House, the other palace that belongs to your family but the one I got to decorate

ELIZABETH: I like it too, but I’m the queen now and the monarch has to live at Buckingham Palace

PHILIP: [mumbles] queen of being a poophead

[Returning from an extravagant global vacation]

SERVANT: excuse me, sir, you have to walk a few steps behind Her Majesty. The Crown takes precedence

PHILIP: be sure to tell the prime minister that we’re naming our kids, and our entire house and all of the kings forever after me

ELIZABETH: your last name is Schleswig-Holstein-Sonderburg-Glücksburg…

PHILIP: not THAT one. Obviously not THAT one. Mountbatten. The fake name I just took, from my seedy uncle, when I came here to marry you

PHILIP: all of the kings forever. house of Mountbatten.

ELIZABETH: I think I’m probably going to go with Windsor, you know, which has been the name of my family since Queen Victoria.

PHILIP: I will literally never forgive you.

ELIZABETH: so at the coronation, you’re going to need to kneel to proclaim your loyalty to me, the Queen

ELIZABETH: because, it’s my coronation. And I’m the Queen

PHILIP: [bitterly] what kind of family is this? What kind of marriage?

ELIZABETH: It’s—It’s a marriage to the Queen of England. you know this, Philip

PHILIP: can I be racist? I’m going to be a little racist.

PHILIP: who’s that horse guy you’re always hanging around with?

ELIZABETH: Porchey? He’s the head of my stables, and one of my closest friends

PHILIP: I don’t like him. You’re always talking to him. You gave him your private phone number

ELIZABETH: I have so few friends, Philip. he’s like a member of the family. you don’t even like horses

ELIZABETH: philip, you are the only person I’ve ever loved. can you say the same to me?

PHILIP: [rolls his eyes] whatever, MOM

PHILIP: yeah, I hate him and he doesn’t know how to fish

PHILIP: and a GIRL

PHILIP: our son is a PUSSY.

[To his toddler son] COME OVER HERE CHARLES LET ME BEAT THE SENSITIVE OUT OF YOU.

PHILIP: I want to fly a plane

PHILIP: a plane. Zoom zoom in the sky. I want to

ELIZABETH: okay, I can check with parliament. I’m sure I can arrange it

PHILIP: zoom zoom in the sky

ELIZABETH: actually, could you go to Australia and open the Olympic games—

PHILIP: why would you DO THIS TO ME? That’s PRIMO time I could spend beating the sensitive out of our son. no. I won’t go.

ELIZABETH: I actually really need you to g—

PHILIP: hope u like feeling alone because I just emotionally PEACED OUT have fun raising our pussy kid

PHILIP: [whispers] i wanna go zoom zoom in the sky 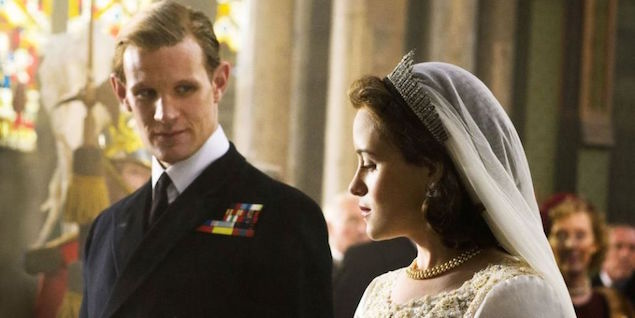