GOOD+ Foundation filled Ralph Lauren’s Madison Avenue menswear mansion with lucky guests last night thanks to the ultimate philanthropic power couple, Jessica and Jerry Seinfeld. Led day-to-day by Jessica and her team of employees, GOOD+ Foundation has spent the past year transitioning from the name Baby Buggy due to the rapid growth of the foundation. “The transition from Baby Buggy to GOOD+ went off so easily, and people got it so instantly,” said Jessica. “They understood we had grown out of that name, and were doing so much more, and the GOOD+ name really speaks to what we do, which is tangible goods plus transformational services and education.”

The foundation’s latest addition is the Fatherhood Initiative that seeks to provide the education and role models many fathers did not have growing up, which Mr. Seinfeld has taken an active role in spearheading on his own accord. “Jerry came to me,” Jessica recalled. “He kept hearing me on the phone everyday just puzzling through how to make this a critical force in what we’re doing, and he became really interested and asked me questions all the time, so I was like, ‘You should just come and listen and go to one of the programs and see how these dads are doing.’ ”

Now, the iconic funnyman has become an essential piece of the GOOD+ puzzle, interacting regularly with fathers enrolled in the foundation’s programs. “We have a bowling night and they all bring their kids bowling,” Mr. Seinfeld, a father of three himself, said of his favorite recent moment spent with the fathers. “For some of them, they’ve never been alone with the child doing something, and there’s something about bowling that’s just such a nice, normal, fun thing. It’s not a special thing, but at the same time it is a special thing. All father things seem ordinary, but are special, because the moment is special.”

Party guests were also graced by the presence of Ralph Lauren himself. The legendary yet elusive designer came out to support the Seinfeld family, and spent his evening talking cars with Jerry before leaving with the parting words, “I really like that suit.” Jerry was, of course, sporting a Ralph Lauren-designed suit selected for him by his wife. “I shop for him, and I will tell you that a week ago or so, he had such a stellar fashion day that, according to GQ, he had his best dressed day ever,” a beaming Jessica said. “I’ve never been so proud. He was wearing Ralph during the day, and we went to the White House that night – When will I ever say that again? – then he wore Lanvin.”

“I guess they supposedly know,” Jerry said of GQ, rejoining our chat after giving one last handshake to Mr. Lauren, and stopping to marvel at our surroundings. “Just look at this thing that he’s made,” he said, looking around at the room replete with oak paneling and custom suits. “He wants to create his world. It’s not just about the clothes, it’s about creating this world.”

Jessica echoed his awe, and the comedic couple began to riff on each other. “It makes you think you can walk out of here in leather chaps on the streets of New York City and make it look okay,” she said as her husband laughed hysterically. “You get into that mindset and it’s fascinating. It’s like, of course I’m going to wear chaps. I’m going to wear chaps to work, and I’m going to wear chaps to pick up my kids from school. And boots! I’m going to tie it all up and wear all of these chains, then you get outside and you’re like, ‘What happened? Where’s my horse?’” Jerry looked at his wife with admiration. It seemed that the couple had switched roles. Jerry was now the philanthropist, and Jessica had become the comedian. “That is so true, that is so true,” Mr. Seinfeld said laughing. “I love you.” 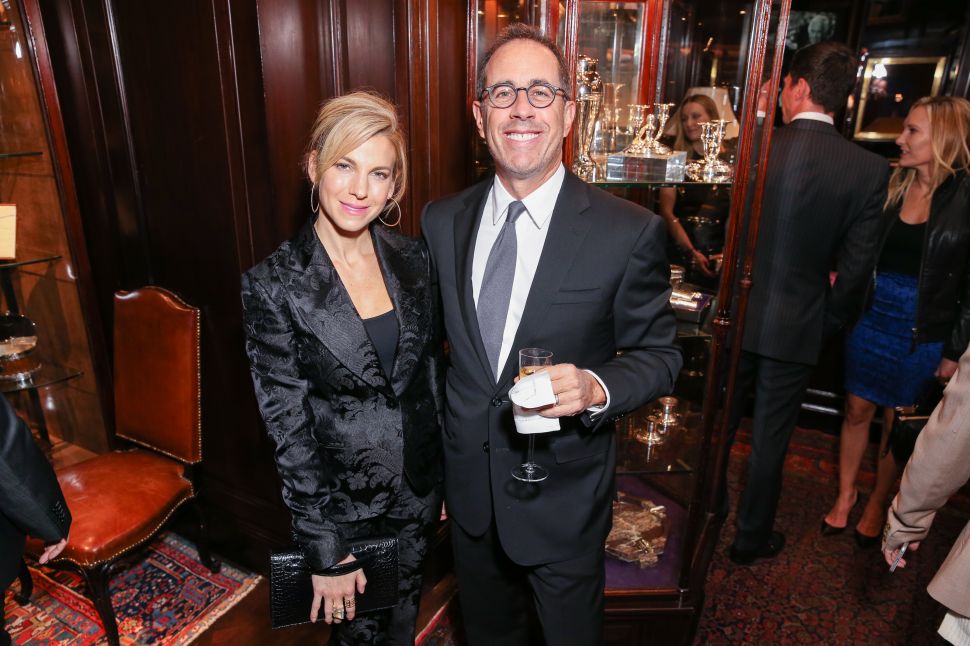