The first time Facebook decided to implement its Safety Check feature for a terrorist incident came after the coordinated attacks around Paris on November 13, 2015, according to Peter Cottle, the company’s engineer who built the first version of the check-in product during the company’s 40th internal hackathon. That activation drew criticism at the time because the company had not turned on the feature in Beirut, the day before, after two coordinated bombings there.

Cottle spoke today at an event organized by the company in Manhattan, describing how the company has been testing ways to allow communities to activate Safety Check automatically, after a major event. After successfully testing automation, he announced that “community generated safety check will be the only way safety check activates.” The company also announced new features that allow members of the community to offer and ask for help in places where the system has been turned on.

In an interview with The Observer, Cottle gave more detail about how the system works. “For a while now, it’s been entirely driven by the community,” Cottle said. “It’s a pipeline. It’s automated.” The first time the community activated the system in the United States came after the shooting at the Pulse Nightclub in June.

Here’s how it works now: The system searches posts in an affected area for relevant words related to a disaster, using what Cottle called “aggregated anonymous search.” When they start to bubble up, Facebook begins prompting users with location services enabled to check in as safe. If users do so, it starts prompting more users in the area. If people opt not to use the feature, it doesn’t show it to as many. This prevents the system from fully activating in places where an event is not deemed to be serious by people there.

One event in one part of the world, such as a typhoon, might be met with a much milder response in another, Cottle said.

There actually is a check on users, however. Facebook partners with an international security company that mines publicly available data globally for information about threats and dangers. Cottle declined to name its partner, but he said it’s an enterprise security firm, the sort that multinational organizations use to identify threats to employees around the world.

Without that third-party verification, the social networking site does not start scanning users posts for words related to a dangerous event. The security firm also defines the affected area. If it ran entirely on common threats in user posts nearby each other, the system could activate in a negative but not dangerous event (such as a really poorly organized music festival).

The community generated nature of the system led to some confusion in Chicago this summer, according to Chicago Mag, but for the team in Menlo Park, the odd stutter probably works out as better on balance than accusations that it deems events in one place as more significant than those in another. “We found it just better to have the community decide,” Cottle said, “to not have our judgement be whether it justifies whether it fits Safety Check.”

When someone checks in as safe, they can now go further if they choose. The site will prompt them with resources for getting additional assistance, such as food, shelter or even pet supplies. Facebook staff demonstrated how the new features work using the Fort McMurray wildfires in May as an example.

People can also offer help. The demonstration included a real post from a user in Fort McMurray who’d offered bedrooms to people displaced by the fires. With the new features, the user would have been able to plug that offer directly into the flow people saw after they checked in as safe.

The idea behind Safety Check originated in 2011 after members of the Facebook team were in Japan during the 2011 Tōhoku earthquake and tsunami.

“After understanding how people used social media in times of need, they began identifying products to build,” Cottle said during his presentation. The team there watched users on the site and realized that it was “hard to understand which of your friends were in Japan when the disaster struck.”

Cottle wasn’t there then, but he and another Facebook colleague both went through having friends in Boston during the Boston marathon bombing in 2013. An engineer on the ads team at the time, Cottle and others decided to develop the idea of a check-in system during a 72-hour internal hackathon. It became a Facebook product in 2014.

“Once you have a personal experience like that,” Cottle said, “you see how Facebook is useful but it could also be better.” 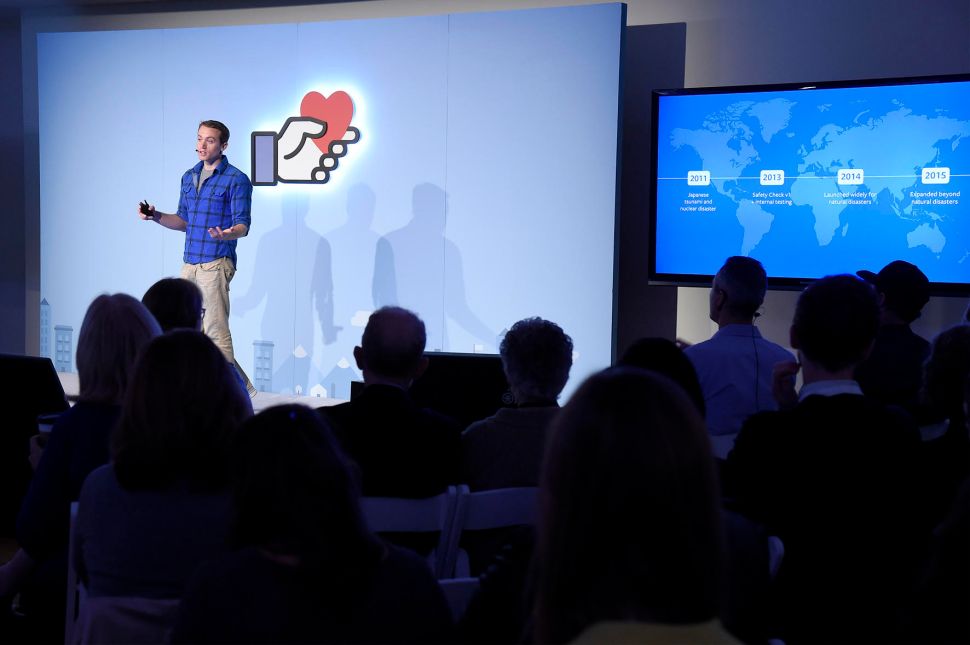