Apart from their more active assaults against the Dakota Access Pipeline protesters, the Morton County Sheriff’s Department has also been waging a propaganda war. They have forwarded false statements, ostensibly from the self-proclaimed “ protectors,” to mainstream media news outlets that have yet to provide on the ground coverage of the protests in North Dakota, and who generally therefore trust the sheriff’s department.

Many of the claims coming from the Morton County Sheriff’s Department have been debunked by eyewitnesses, but media outlets who have refused to send reporters to see for themselves, such as CNN, parrot the sheriff’s department’s statements, assuming that a report from police is invariably the same as the truth.

The Facebook page of the Morton County Sheriff’s Department was removed on November 25. On Thanksgiving, they posted a photo in honor of the various law enforcement officers who have come from all over the country to help put down the protests. The Sheriff’s Department also solicited donations, fitting, perhaps, considering hat they have depleted millions of dollars in funds in their efforts to suppress and attack the unarmed Dakota Access Pipeline protectors. The Morton County Sheriff’s Office did not respond for comment as to why their Facebook page was removed and has yet to be restored.

The Morton County Sheriff's Department had the nerve to post a Thanksgiving message while it brutalizes & represses #NoDAPL water protectors pic.twitter.com/UzG7ZYb5db

Reporters who travel to the site have not had an easy time of it. Democracy Now journalist Amy Goodman was arrested after reporting that private security guards hired by the pipeline were using dogs to attack some of the protectors. The frivolous charges against Goodman were dropped, and the Morton County Sheriff’s Department revealed the guards were not even properly licensed to work in North Dakota.

In October, the Morton County Sheriff’s Department issued a press release claiming protectors attacked three journalists. The sheriff’s office failed to name what outlet they were reportedly from, and no journalists ever reported being attacked.

In addition to Goodman, several other journalists reporting from Standing Rock have been shot with rubber bullets and even arrested.

On November 20, the Morton County Sheriff Department issued a press release claiming protectors were using IEDs (improvised explosive devices). On the ground media reports refute these claims, including video evidence showing the violence was one-sided toward the protectors. The department claimed to obtain glass jars “consistent with the design of Molotov Cocktails” but have not produced any evidence proving their claims. No police injuries have been reported. While there has been many video and photographic accounts of the violence from police toward the protectors, no corresponding evidence has been released which corroborates any of the claims from the Morton County Sheriff’s Department that violence was being used by those protesting the Dakota Access Pipeline.

cannons were used against the protectors in subfreezing temperatures, resulting in 300 injuries, according to the Standing Rock Medic Council. One of the more severe injuries was caused by a concussion grenade thrown at 21-year-old Williams College graduate Sophia Wilansky. The Morton County Sheriff’s Department claimed the injury was self-inflicted by the protestors. Her father, Wayne Wilansky, a Bronx based attorney, released a statement on November 22 in regards to the incident.

“At around 4:30 a.m. after the police hit the bridge with cannons and rubber bullets and pepper spray, they lobbed a number of concussion grenades which are not supposed to be thrown at people directly, at protesters, or protectors, as they want to be called. A grenade exploded right as it hit Sophia in the left forearm, taking most of the undersurface of her left arm with it,” he said. “Both her radial and ulnar artery were completely destroyed. Her radius was shattered and a large piece of it is missing. Her medial nerve is missing a large section as well. All of the muscle and soft tissue between her elbow and wrist were blown away. The police did not do this by accident—it was an intentional act of throwing it directly at her.”

A GoFundMe created on behalf of Wilansky to cover the medical expenses from the numerous surgeries she is facing to have a chance at saving her arm has reached nearly half a million dollars in donations.

The Young Turks reporter Jordan Chariton interviewed an eyewitness who was with Sophia Wilansky when she was injured who reaffirmed Wilansky’s injuries were inflicted by the police.

Disinformation campaigns in regards to the Dakota Access Pipeline have been propagated by the oil companies behind the pipeline as well. This includes a Standing Rock “fact-checker” website and public relation efforts conducted by the Midwest Alliance for Infrastructure Now. The latter has published Op-Eds in The Hill and the Washington Examiner, one of which claims, with no evidence, that the Standing Rock Sioux are protesting the pipeline just to get “easy money.” This is the same tribe who has refused to accept over $1 billion from the United States government for land that was stolen from them in the Black Hills because it was never for sale in the first place.

The ongoing efforts to stop the Dakota Access Pipeline at Standing Rock will go down in history as one of the most significant civil rights issues of our time. Hopefully the lessons learned from past civil rights battles will be addressed toward this issue before President Obama finds his legacy on the wrong side of history as the leader who could have done something but chose to do nothing. 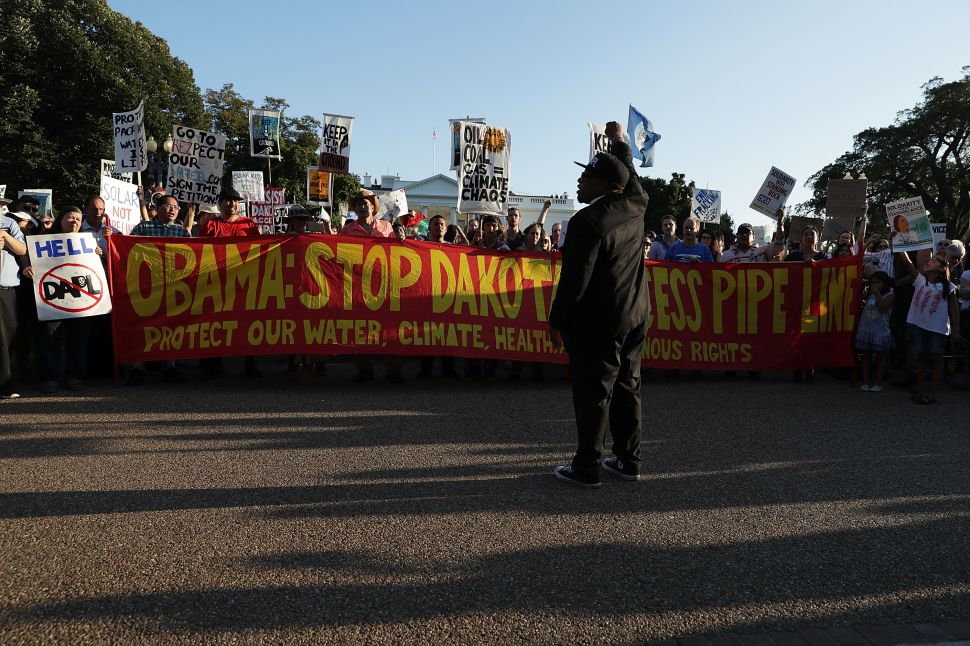