The week leading into Halloween 2016 included what for a few hours at least seemed the worst trick ever played on the Metropolitan Opera, as well at that most delicious treat of all: an opera gala that was actually, you know, gala.

The trick—when an audience member at Saturday afternoon’s performance of Guillaume Tell at the Met was observed dumping mysterious white powder into the theater’s orchestra pit—fortunately turned out to be nothing more dangerous than the misguided act of a visiting opera fan. During the second intermission of the Rossini melodrama, Dallas-native Roger Kaiser sprinkled some cremains of a friend and opera mentor in the pit.

When Met musicians reported Kaiser’s suspicious-looking actions, the company went on alert, dismissing the audience for Tell and canceling the evening performance of L’Italiana in Algeri while police investigated the situation.

This incident had tongues wagging at the annual Richard Tucker Foundation Gala the following evening, though more of the talk centered on the unusually high quality of the vocal performances of the artists featured at this benefit performance. Practically every item on the intermissionless two-hour program was a treat.

Outshining the galaxy of stars surrounding her was Anna Netrebko, who swept on stage in black taffeta and diamonds to perform an ecstatic version of “La mamma morta” from Giordano’s Andrea Chenier.  The pensive opening section of this aria put on display the soprano’s rich, complex lower register. As the piece slowly built to its climax on high B-natural, her tone gradually grew brighter and more joyous, like the sun bursting through storm clouds.

She was scheduled to sing another piece from the same opera with her husband, tenor Yusif Eyvazov, but due to an injury soon after their arrival in New York, he had to cancel his appearance at the gala. As compensation, Netrebko offered an encore, “Io son l’umile ancella” from Cilea’s Adriana Lecouvreur, with the same voluptuous tone as she had lavished on the earlier number, but this time around refined to a pastel elegance.

Particularly ravishing was the final phrase, in which the soprano attacked the final high A-flat with a throbbing fortissimo before shading the sound down to a haunting whisper. When she finally fell silent, an audience member sighed, “Oh, my god!” before the auditorium burst into cheers.

So rich was this program’s musical offering that it included several numbers what could stand as the centerpiece of a gala, including a rousing duet from Rossini’s Otello that tenors Lawrence Brownlee and Javier Camarena turned game of volleyed high C’s. Camarena returned to partner soprano Nadine Sierra in the final act duet from Bellini’s I Puritani. Critics generally describe this piece as “grueling,” but in this case it sounded like sheer joyous fun.

Mezzo-soprano Jamie Barton made several memorable appearances as well, with a luxurious reading of the sensual “Mon coeur s’ouvre à ta voix” and, in duet with mezzo Joyce DiDonato, a sweetly plaintive performance of the Cornelia-Sesto duet from Giulio Cesare.

If the nominal focus of the gala, the 2016 Richard Tucker Award Winner Tamara Wilson, seemed a little overshadowed on this occasion, that was perhaps because her first selection, an aria from Wagner’s Tannhäuser, did little to flatter her steely dramatic coloratura soprano. Later numbers, in particular a vigorous, rangy rant from Verdi’s I Due Foscari, highlighted her virtuoso coloratura skills and fiery temperament. She, like her more celebrated colleagues, achieved their effects more or less in a vacuum, since conductor Asher Fisch had his hands full trying to indicate a clear downbeat.

If this gala represented opera at its most traditionally grand, a concert the previous Wednesday in the unlikely venue of the crypt of Hamilton Heights’ Church of the Intercession suggested a more intimate and offbeat future for the art form. The centerpiece of this hour-long program was the world premiere of a new setting of Poe’s The Tell-Tale Heart for only three performers, pianist Gregg Kallor (also the composer of the piece), cellist Joshua Roman and mezzo-soprano Elizabeth Pojanowski as protagonist.

Kallor’s economical score vividly depicts the gradually developing hysteria of the leading character, here depicted as a woman, perhaps an unwilling sex partner of the murdered old man. Pojanowski’s flinty mezzo deepened with lurid color as her character’s confession grew more histrionic, all the time putting over every single word of the libretto with clarity. The starkly simple production by Sarah Meyers, which placed Pojanowski in the merciless glare of a single spotlight, proved one of the most effective stagings I’ve seen from the always-inventive On Site Opera, a collaborator on this project.

If staging The Tell-Tale Heart in a crypt sounds like a trick, this piece turned out to be a treat as well. And I can’t think of a better opera to become a new Halloween tradition. 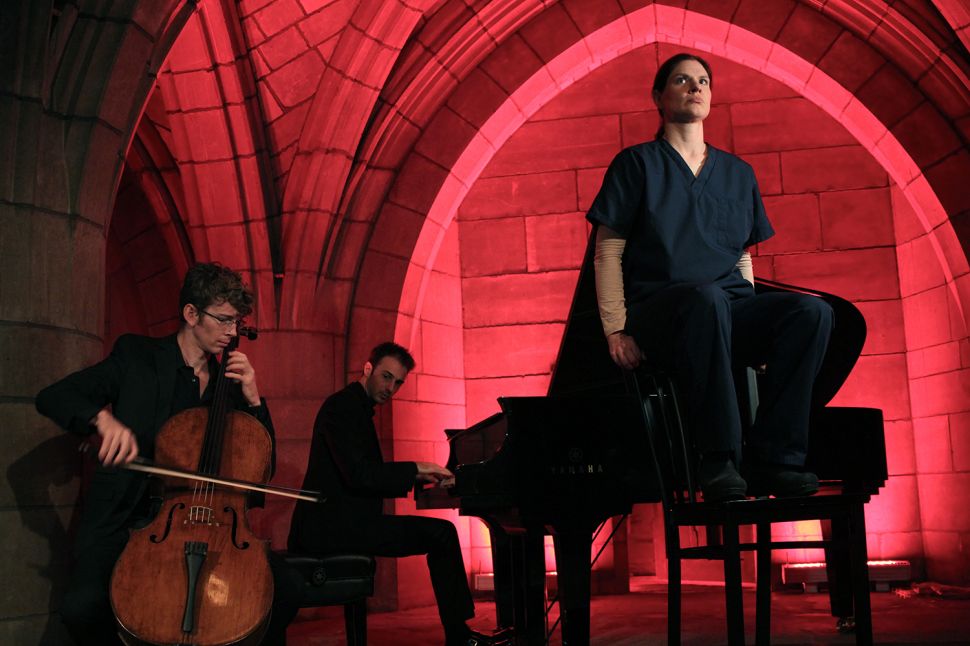