The first half of the opening entry of the heavily marketed, aggressively-demanded Gilmore Girls: A Year In The Life series feels like a Westworld reenactment of the Stars Hollow we once knew — an artificial world where violent delights might have violent ends and Babette might stab you in the neck.

The show’s ominous opening ( a Black Mirror-like voiceover montage of the past seven seasons) drops us in the town square in Christmas overdrive as mother and daughter reunite and Lorelai smells upcoming snow with the staged awkwardness of a witch in a high school production of Macbeth. Make no mistake: this is The Gilmore Girls on crack, which considering the already fast pace of the original, can feel like some unholy new chemical that might make your nose bleed before the high ever kicks in.

Luke and Lorelai still feel painfully mismatched (opinions may vary there) but remain together in a happy ending of their own making, while Alexis Bledel’s skin stubbornly refuses to age leading to characters repeatedly having to mention the fact that Rory is now a 32-year-old woman, so we’ll start seeing her as such.

To be fair, the very appeal of The Gilmore Girls is the cartoonish charm of this world. If these characters didn’t change in seven seasons, we can’t expect them to do so in four ninety-minute film-isodes. Ten years later, almost every supporting character feels like they’re now in a caffeinated version of the “small, quirky town” narrative they were assigned in 2006. (Kirk is not only launching an Uber replica service but also now owns a pet pig!)

But as things settle, we find the dramatic core of this brave new world; some needed salt after so much teeth-numbing sweetness. Because if Stars Hollow never changes; Rory and Lorelai do. At least, they’re supposed to. A decade later, mother and daughter are both wrestling with the fact that their upward journeys may have plateaued.

For new Rory, there is no Chilton to graduate, no Yale to attend, no paper to become Editor-in-Chief of: she is a thirty-something freelance journalist trying to parlay a recent piece in The New Yorker into the next step of a meaningful writing career. And having recently given up her apartment under pretext of travelling too much anyway, our girl also finds herself effectively homeless. (To be fair, for Yale graduates with trust funds homeless just means without a current mailing address and crashing the giant homes/ apartments/ brownstones of her friends and family at a whim.)

Rory’s love life is equally off as she pulls out “Paul,” her milquetoast boyfriend of two years that no one – including Rory herself – can bother to remember. This reheated fricassee of lesser Dean (with a dash of Marty) is a one-scene joke that drags on too long as Rory’s treatment of him begins to feel… downright mean.

If it doesn’t sound like the Rory you knew to string along a nice guy for whom she has complete disdain for, that’s because it isn’t. There’s only so much quipping you can do to cover the fact that you’re the freelancing mistress of the guy you dumped nine years ago, girl.

That’s right: Rory is still banging Logan Huntzberger, her now very engaged college boyfriend whose pad she crashes whenever she happens to be in London. Or, when she’s travelling to London for the express purpose of crashing his pad. (Trust fund.)

What might be just another arc for Hannah Horvath or Carrie Bradshaw feels particularly dark in the shoes of Rory Gilmore. A now thirty-something Rory Gilmore. Remember: this was a WB-network baby whose defining character trait was “Getting into Harvard” while improbably well-read bad boys fell at her feet. For the type-A Rory we all knew, her three burner phones might as well be a baggy of crushed up Xanax pills ready to be snorted at a moment’s notice. If there’s one looming plot to ‘A Year in The Life’ it is that Rory has effectively lost her groove.

Mother Lorelai is equally stagnant as her life is exactly as we left it. Still shacking up with Luke – unmarried – and with no kids on the horizon. Whether she herself wants another kid is a question that Lorelai is actively wrestling with, and serves as the perfect entry point for Paris Geller — now the Pablo Escobar of fertility doctors — with two inconvenient children of her own and upcoming divorcee to series boyfriend Doyle, now a screenwriter she plans on eviscerating in courts. Some things should always stay the same and Paris Geller being a high point of the Gilmore-verse is one of them. Liza Weil is a goddamn delight.

A Year In The Life does a great job of weaving the absentees into the fabric of this revival. Patriarch Richard Gilmore is now dearly departed (RIP, actor Edward Herrmann) and appropriately kept alive in a cartoonishly large portrait that looms over his family. A flashback to Richard’s funerals delivers one of the best and most vicious Lorelai-Emily fights in history and, thirty-two years too late, mother and daughter are finally headed to therapy. Lorelai’s best friend Sookie St-James (AKA, now international movie star Melissa McCarthy) has also moved on from the Dragonfly Inn, leaving Lorelai afraid of losing the now openly gay (as opposed to asexually bitchy) Michel next. Lorelai’s world is getting smaller and she is restless at the prospect.

I ultimately don’t mean to paint too grim of a picture here. Considering the year we’ve been having, you should still very much revel in new Gilmore Girls brightening your 2016 in full technicolor. After all, this is still a world where Rory tap dances her stress away in the middle of the night, so don’t expect an actual line of Xanax anytime soon. (Then again, with three ninety-minute entries left to cover; who knows?)

The titular gals are still as chipper and likeable as ever but with so many years under its belt and Richard deceased, the series now touches on an underpinning of sadness the show never really needed to get into.

At 32 and 48, Rory and Lorelai are now two adult women faced with life’s unfulfilled expectations and no graduation-themed season finales to look ahead to. It is actually great to have creator, Amy Sherman-Palladino, back at the helm to tackle this new reality. And yes, it is much, much better than Season 7 ever was.

Gilmore Girls. It’s not a lifestyle; it’s a TV show you really liked 10 years ago, now extended on Netflix. We’ll take it. 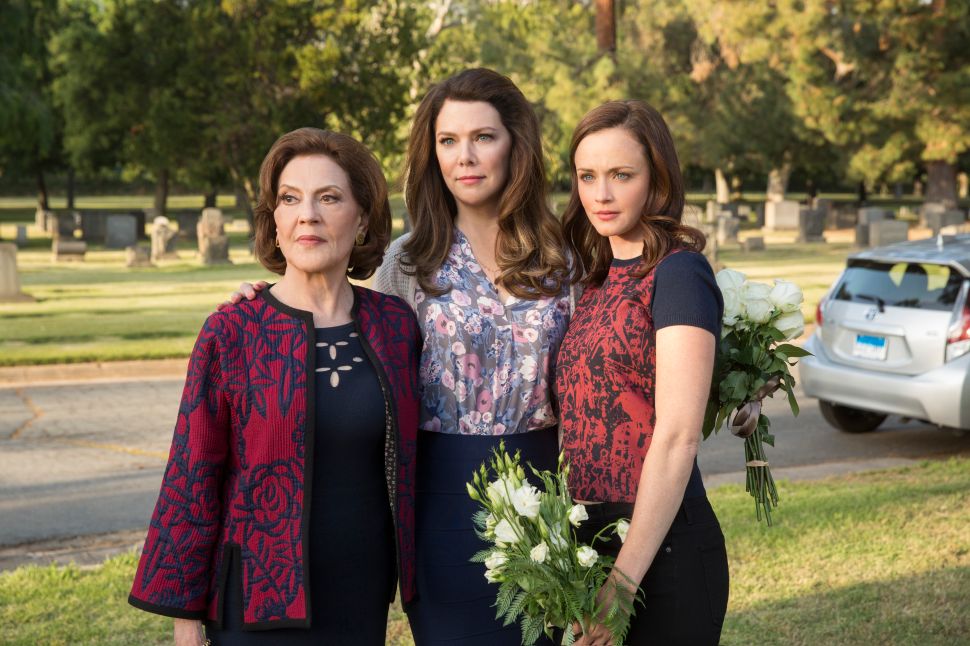