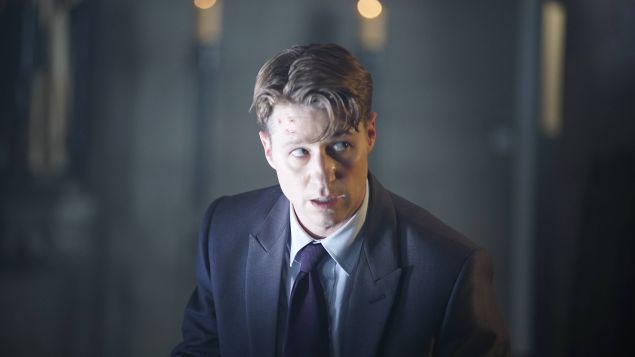 Gather round, Bat-fans! / The big and the small / Because after tonight / Gotham‘s gone for the fall / But first, there’s Lee’s wedding / to fill Gotham’s halls / While Jim Gordon’s busy/ Getting punched in his balls / And…wait just a second / Remember when Ivy got old? / Oh man, that was creepy / Like, dude’s are just told / that she’s 30 or so / but she’s actually 15? / Balloon Man was dumb / But that shits actually obscene / Plus, the stuff with Trump / turned Penguin all orange / Man, Gotham’s third season / has been super….

Ah, shit. I actually thought I could do that for the whole recap. Oh, man. How does Tetch do that? That paragraph took like, six hours to write. Oh, man. Let me take a breathe here. Recap and Reference Guide of Gotham‘s fall finale, titled “Beware the Green-Eyed Monster”, coming up after this GIF of a Talon sneaking around that I can’t stop laughing at:

Soooo yeah, here we are, another Gotham Fall Finale come and gone, and we’re left with everyone in a significantly worse place than where they started. Let’s start with Jim, who over the course of this episode manages to womp-womp so hard and so often that the combined trombone noise of his actions ripped a whole into another dimension where everyone communicates solely through dark, sullen glances and gritted jawlines (it’s called The Affair, Sundays at 10 on Showtime).  Jim not only spends 90 percent of this episode getting his ass kicked, but stumbles into Lee’s wedding like “your mob-prince fiancé is also a rage-monster, but that doesn’t matter because I. Still. Love. You.”

Lee smacks him in the face, which is hilarious. And only sort of deserved! Because yes, Mario Falcone–in addition to being the son of a deadly mafioso and the proud owner of the world’s mistiest lake house, is in fact infected with Alice Tetch’s magic blood. But Jim has very little evidence to back this up, and is operating squarely on his detective’s instinct. Jim’s detective instinct, for the record, is misguided as Barnes’ head is round. The only reason Jim has any idea Mario is infected is because he talked to a deranged children’s book character in an asylum for the criminally insane, and the ONLY reason he got that lead is because the real culprit wrote the location on his arm with a Sharpie. If Jim Gordon pulled you over for speeding, you’d have to write the ticket for him, assuming he let you borrow his crayons.

Eventually, Jim manages to convince Carmine Falcone that his son is in desperate need of help. By “convince,” I mean that Carmine is like, “Ahhh, right, I did find it odd that Mario put ‘Murder Knife’ on his wedding registry.” Jim, for pretty much no reason, decides he and he alone can go save Lee from her own husband’s murderous rage / the boredom of honeymooning at a lake house. Finally, after Jim shoots two henchman as an argument, Carmine urges Jim to go, but one one condition: “Please don’t kill my son.”

So then Jim goes and kills Carmine’s son. In his defense, Mario was right about to stab Lee in the back–the voices in his head had him all uppity, as predicted–but Lee doesn’t know that. Shots are fired, the knife goes flying, and all Lee sees is her unstable, wild-eyed ex-fiance holding the smoking gun. Beware the green-eyed monster, indeed. 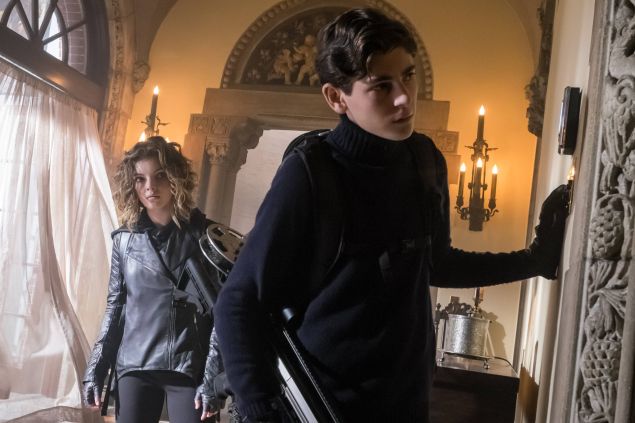 Meanwhile, in a storyline that is pure, gleeful fun underneath the brutal neck-stabbings, Bruce, Alfred, and Selina plan to Oceans 11 their way into the Court of Owls’ mysterious underground vault. Unfortunately, this requires someone to traverse across a wire, over an alarm-covered floor. Bruce, who is but a Bat-boy and not yet a Batman and, as such, unaccustomed to his gangly dancer’s legs, can’t make the trip. Luckily Selina is good at balancing, like some sort of animal that is also good at balancing. Like a…koala? No. I don’t know what it is, but it’s definitely not koala. Oh well!

Sadly, even the best laid plans go awry when dealing with this level of stealth. Yes, I’m doing the GIF again:

A fight between the Court’s Talon and Alfred breaks out, which ends with an assist from a peculiar masked and be-top-hatted woman. (Alfred, for his part, straight stabs the Talon under the chin, which is equal parts gruesome, amazing and gentlemanly). Surprise! It’s Selina’s mother, who I am going to bet $100 right this second is named “Kitty”. Sidenote: Bruce Wayne’s frustrated-as-hell 15-year-old reaction is priceless. In that moment, our future Dark Knight would rather fight fifteen more deadly assassins than meet his girlfriend’s mom.

Finally, we come to Edward Nygma and Oswald Cobblepot. Nygma, whose whole “thing” is being good at puzzles, finally, with a little help from Barbara, susses out the truth that’s right under his nose; Oswald killed Isabella, and he did it out of love. Horrible, murderous misguided love, but love all the same. Edward, who has room in his heart for countless riddles but not forgiveness, is less than enthused with the news. “I want to destroy him,” Edward tells Barbara, along with the handless twins Butch and Tabitha. “I want to take away everything that he loves. I want to make him despised.”

Truthfully…there’s not much to this; the Eddie and Oswald stuff is largely set-up to the gang war that, I assume, will take up a bulk of season 3’s second half. But man, credit to Cory Michael Smith and Robin Lord Taylor for mining some genuine emotion from the comic book-iest of comic book storytelling. Taylor’s delivery on “You are the best friend I’ve ever had. I don’t wanna lose you” was so genuinely sad. Yes, Oswald has a body count taller than he is but, man…he just really likes that green-suit wearing bastard, you know? It’s tough watching a broken, flightless bird of a psychopath deal with love, much less unrequited love.

And then Edward’s response: “You’re my best friend as well, Oswald. Remember that.” This is like Godfather Part II, if Francis Ford Coppolla was tripping absolute balls on his sister’s poison blood, Michael Corleone was obsessed with riddles, and the baby from the end of the first Godfather randomly aged 25 years so it could hit on dudes.

Oh, man, I am still really not over that Ivy thing.

As always, let’s run down every reference, fact, and nugget of Bat-history brought up season 3’s Fall Finale, “Beware the Green-Eyed Monster” 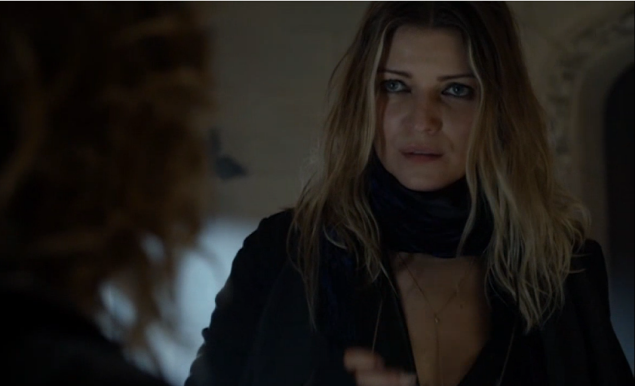 So, okay, Selina’s mother is not named Kitty: It’s Maria Kyle, as first introduced by writer Devin Grayson in Catwoman #69. In this particular story, Maria Kyle is an abusive mother that spent more time with cats than her daughter and then committed suicide, leaving a young Selina alone with her alcoholic father. So, cheery stuff a’coming on Gotham!

And…that’s it, for now / until next season, / when Gotham returns / without rhyme(s) or reason. / I’ll see you then / you bring the spliff. / Until then, friends / we’ll have this GIF: 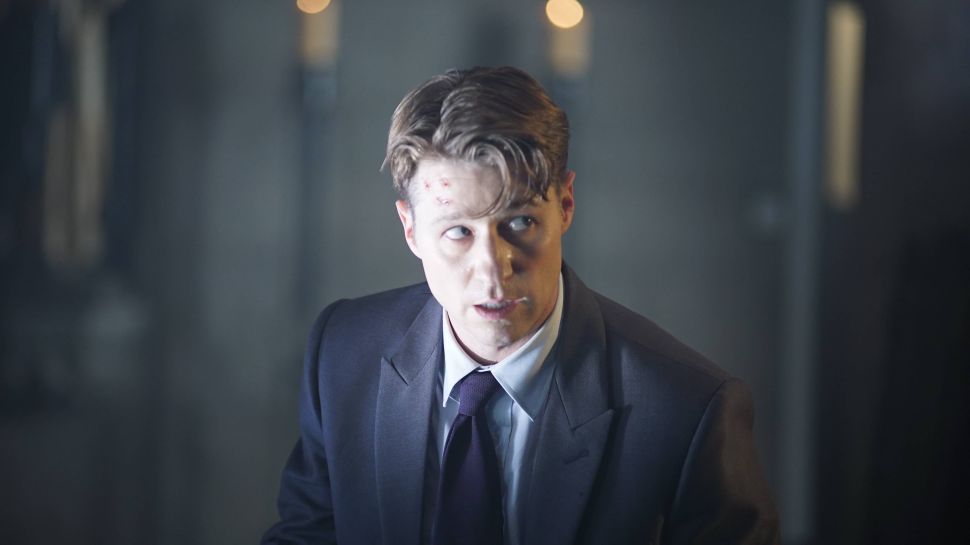