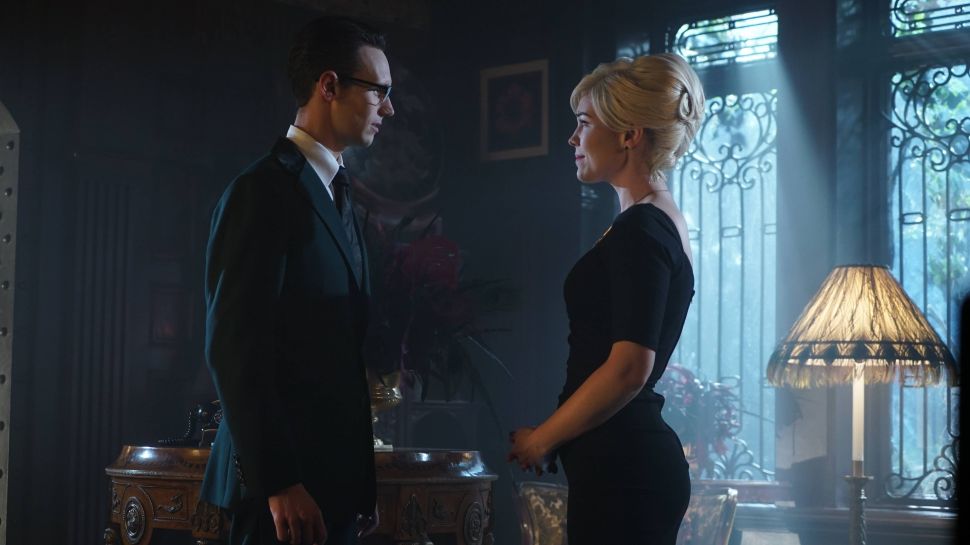 Ugh, isn’t it awkward when someone shows up on Halloween wearing the exact same costume as you? This year, both Gotham and I decided we were going as the guy wearing a top hat peer pressuring everyone else at the party to take hallucinogens. Super awks. In my defense, this is the outfit I wear every Halloween, as well as most Tuesdays, plus that one-off appearance at a disastrous Thanksgiving Dinner in 2013.

Last night’s Gotham, titled “Red Queen”, revolves again Jervis Tetch. Tetch visits Robert Smith of The Cure to buy some off-the-chain mind-altering drugs–the titular Red Queen–that send Jim Gordon down a hallucinogenic rabbit hole that’s one part existential life lesson, one part a ripoff of the mind-elevator from Inception, and one part an exact word-for-word replication of the time my freshman year dorm neighbor in the ROTC convinced me to smoke “synthetic weed” which actually turned out to basically be cabbage sprayed with insecticides. The only difference being, of course, in real-life no one greets you with “welcome to your hallucination”; it’s just hanging out one minute and then suddenly you’ve been playing Grand Theft Auto IV for 5 hours next to a slug-monster with the face of your sister-in-law.

But yeah, no, besides that, Gotham was pretty spot-on: 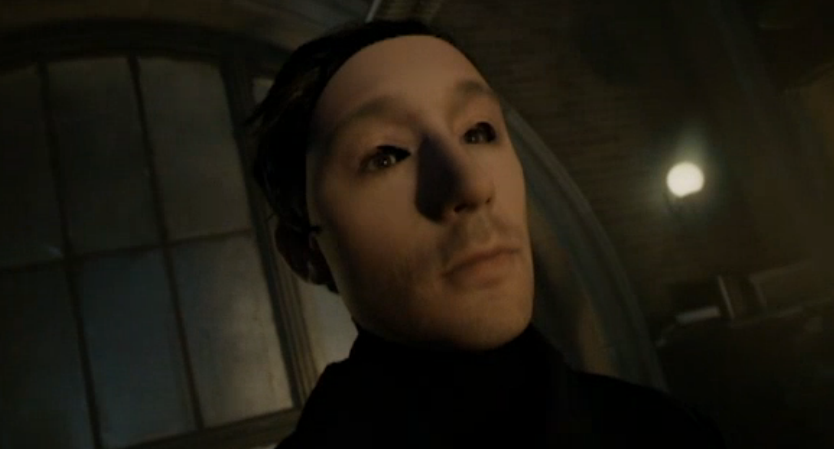 Jim’s first stop on Trip-A-Palooza 2016 is a vision of the GCPD building, because even stumbling through an allegorical, subconscious illusion inside your own drug-addled brain you can still break into the GCPD building with minimal effort. I really dug this section, though, because it established a lot about Jim’s character that this season tends to forget; his relationship with Bruce Wayne, a bond that will span an entire life-time and numerous ridiculous bat costumes, for one. It’s telling that down in the trenches and amid the bomb-blasts–and kudos to Gotham for remembering Jim spent most of his life in the army–the two people Jim sees are Bruce Wayne and Oswald Cobbepot, two men with limitless potential but residing on opposite ends of the spectrum, the first angel and devil to land on Jim’s shoulders in Gotham City. It’s beautiful character work, really, which is only slightly marred when halluci-Bruce shoots Jim, and Ben McKenzie lets out a scream that I can only compare to a pterodactyl filming a reaction video to The Red Wedding episode of Game of Thrones.

Meanwhile, outside of Jim’s head, Gotham concerned itself with affairs of the heart; Oswald and his infatuation with a newly-in-love Eddie Nygma, Bruce and Selina, and Jervis’s on-going devotion to his dead sister Alice. Let’s start with Eddie and Oswald, because that storyline doesn’t involve anyone kissing a corpse. Well, unless you subscribe to the theory that Isabella is just a recently-resurrected Krysten Kringle, because then it totally does involve someone kissing a corpse….

No, we’ll get to that. But first, I love that Gotham is setting up a love triangle that only one participant is aware of, because it highlights wonderfully the character this particular Penguin has become over three seasons. For as many genuinely sweet, heartfelt moments we’ve got from Oswald recently, it’s worth remembering that this dude is a straight psychopath that once killed a man for a tuna fish sandwich, which everyone knows is like the 26th-ranked sandwich worth killing a man over, at best. But that’s Gotham‘s Oswald Cobblepot; when he wants, he wants obsessively, dangerously. He’s decided, in that spiky-haired head of his, that Nygma is his–not a romantic partner, really, but HIS partner–and he’s clinging to that idea like a child to his favorite toy. And so, of course, when someone moves on that toy Oswald does what a child would do: he tattles. Oswald’s attempt at revealing Eddie’s past to Isabella is hilarious in how obvious it is: “Uncanny how much you look like her. It’s that swan like neck. Ed loves the neck!”

Over at Wayne Manor, Bruce is trying to relate to Selina’s life on the streets by baking a cake, because having dessert for dinner is literally the most badass thing a 15-year-old Bruce Wayne’s mind can process. Alfred, who I pretty much HAVE to assume has seen every single episode of The Great British Bake Off, looks on in disappointment.

Speaking of baked goods and shame, I’m pretty bummed with how lame the Mad Hatter’s involvement in this episode was outside of tripping Jim Gordon’s balls off. At this point, a villain has dressed up like a waiter and tried to ruin a fancy Gotham City party so many times I’m FAR more interested in whether or not the clothing company making all these knock-off waiter costumes are aware they are an accessory to so much murder. Besides that, Tetch’s ridiculously-easy-to-foil plot to drug all of the city’s founders felt like a huge waste of time, mostly because Tetch incapacitated one single person who isn’t even a cop anymore and was like “who could possibly stop me now?!”

Luckily, against all evidence to the contrary, there are far more interesting things happening inside Jim’s head than the monkey crashing two cymbals together I always pictured. First, he’s offered a glimpse of what a blissful suburba-dad life with Leslie would look like had he just picked up a cell phone and called her after getting out of Arkham instead of…not doing that for some reason.  Either way, Jim’s hallucination breaks down when his family repeatedly calls him “just the best” and, because Jim owns all two seasons of Gotham on Blu-ray, he is aware he is in actuality “just the worst.”

Then, halluci-Barbara hands Jim a key and says “the key was in my fist, my fist was in my pocket” except no, that actually happened on Mr. Robot, but this is pretty much the same exact thing up to and including Jim having visions of his dead father (uh, spoilers for Mr. Robot I guess?). Unfortunately, Peter Gordon isn’t played by Christian Slater, and he’s definitely not played by Bruce Campbell, despite how much I thought he was for like three straight minutes. EITHER WAY, the senior Gordon has some sage advice for his son, who I must point out is still tripping his absolute balls off on a hospital floor, which pretty much amounts to: “Holy shit, you didn’t even call her when you got out of Arkham? Not even, like, an email? Jeez, well, check out my ring and become a cop again, ya dingus.” And then Jim’s dad dies of cancer and has to close his electrical appliance store, Hugo Strange becomes a woman, and Jim finally wakes up in a hospital. Apparently, according to Lee’sFiance Falcone, Tetch’s unstoppable, incurable, mentally devastating super drug can actually be cured with a nap and some orange juice.

Now, as someone who once got an 8 on a Latin test that gave 6 points for writing your name, I’ll take Gotham‘s word that Peter Gordon’s ring reads “While we breathe, we shall defend.” The big takeaways here are A) Jim’s officially a member of the GCPD again, which makes him ten times more susceptible to slipping on dog poop and ripping his pants and B) It appears Peter Gordon was a member of The Court of Owls, the all-powerful, all-seeing, adorably bird-themed Illuminati of Gotham City.

As always, let’s run down every reference, fact, and nugget of Bat-history brought up in season 3, episode 7, “Red Queen”

Based solely on the fact that Isabella works in a library, is obsessed with books, and once broke her tibia, here are my theories as to who Isabella really is, in descending order of plausibility:

Well not actually Barbara Gordon, seeing as how that’d make Jim her father in some time-travel nonsense I and you and we all are not ready for. But a take on Barbara Gordon–the one who, when she wasn’t Batgirl or, you know, paralyzed from the waist down, was the Head Librarian of the Gotham City Library, and shared an eerily similar taste in hair style and neck accessories with Isabella: 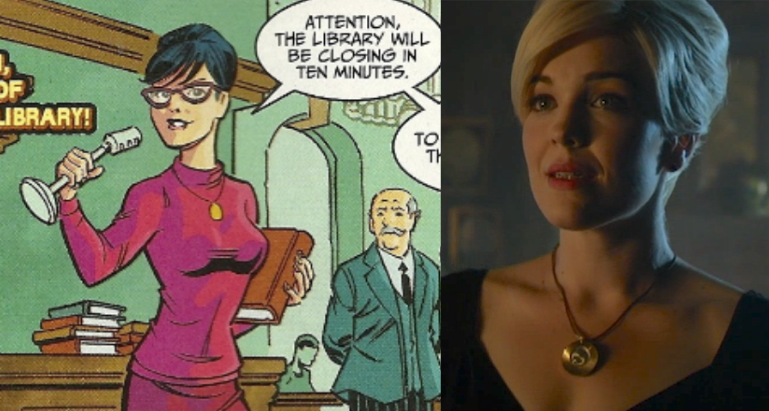 Book Worm is a villain from the 1960s Adam West Batman series (and later the Batman ’66 comic series), who has a dumb hat with a light switch on his head. But he’s also obsessed with books, JUST LIKE ISABELLA: 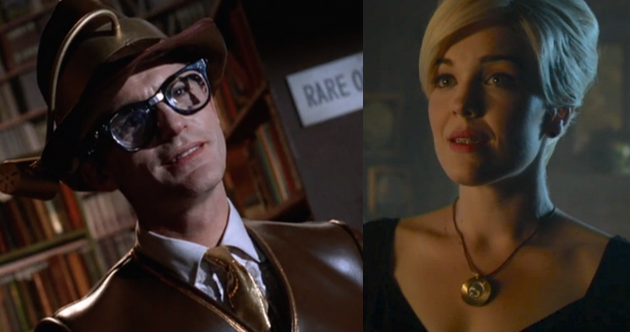 (Fun fact: Roddy McDowall, the actor who played The Book Worm, later went on to voice The Mad Hatter in Batman: The Animated Series. Layers upon layers)

The Librarian, real name Stanislaus Johns, was a one-off Batman villain first appearing in Detective Comics #643, who murdered people according to the Dewey Decimal System. He’s also, as you may have been able to tell, a librarian…JUST LIKE ISABELLA: 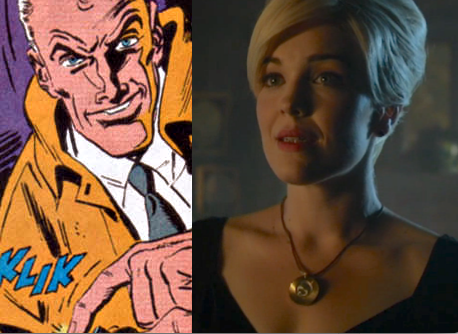 David Garrick was an actor and playwright in late-1700s Britain, who garnered his first real critical acclaim after taking on the title role of Shakespeare’s Richard III. Legend has it that Garrick was once so engrossed in playing the part, he didn’t notice a fracture in his leg, thus birthing the actor’s phrase “break a leg.” That’s right, a Shakespeare fan with a fracture in his leg…JUST LIKE ISABELLA: 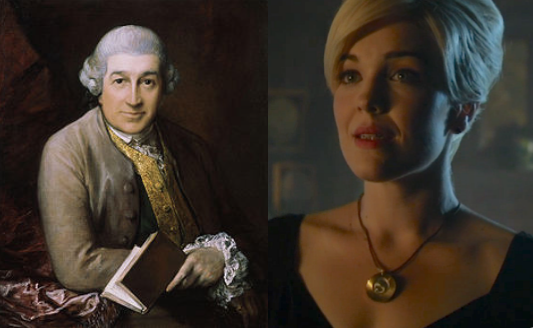 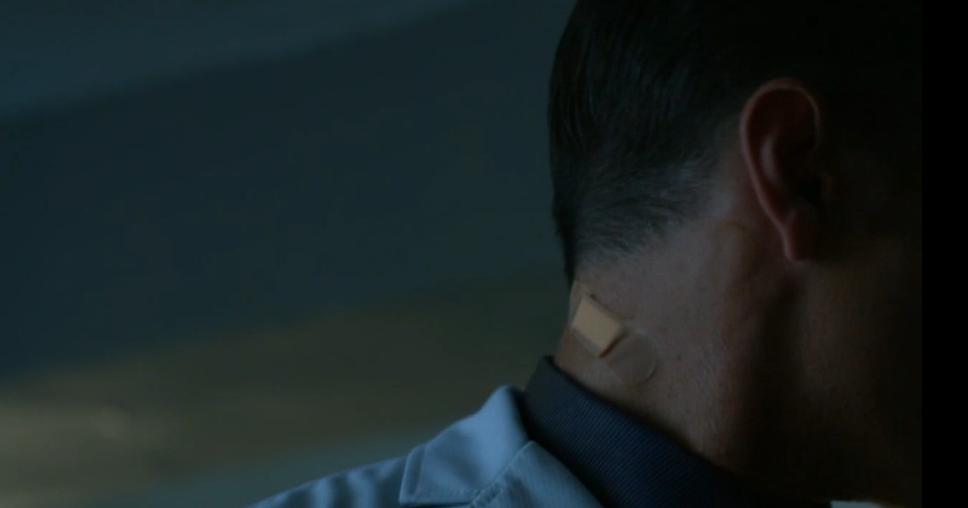 I can’t, for the life of me, figure out why Gotham so prominently (and mysteriously) focused on that Band Aid on the back of Mario Falcone’s neck, but you have to assume it’s important. My guess is it’s connected to the frequent sightings of The Dollmaker’s Trident Shipping Company, OR The Court of Owls, OR the time the Tweedle Brothers locked Mario’s useless ass in a bathroom. Stay tuned. 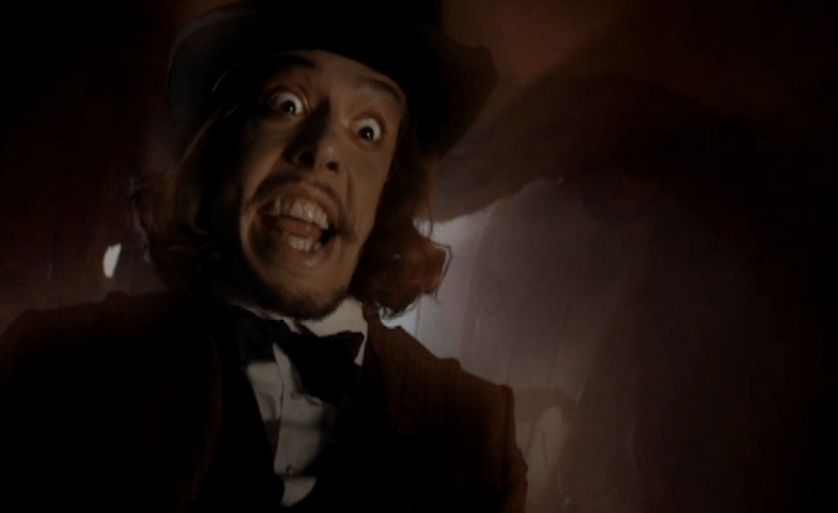