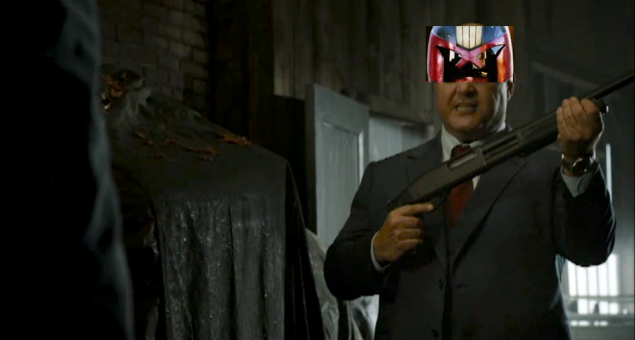 This may come as a shock to some readers–truly, if you’re standing I suggest sitting or maybe even laying down–but the above photo of Captain Nathaniel Barnes wearing the helmet from the 1995 action-classic Judge Dredd is not an official promotional photo provided FOX. I made it myself. It took 14 hours, not including an hour break for lunch and stretching. This is why the Reference Guide for last night’s Gotham, titled “Executioner”, is going up so late. I think I speak for everyone when I say the results were worth it.

But why, you ask, Judge Dredd? Well, for anyone who hasn’t seen it–and if so, what, did you not have a Blockbuster near your house?–Oscar-nominated block of driftwood Sylvester Stallone plays Joseph Dredd, a “Street Judge” in the year 2080 who works simultaneously as police officer, judge, jury and executioner. Our greatest modern linguistic scholars and high-level translators have concluded Stallone is saying “I am the Law” in this clip. Nathaniel Barnes, as we saw in “Executioner”, has also styled himself “The Law”, choosing to shotgun-blast and hangman’s noose criminals instead of the usual GCPD procedure, which is to trip over a stick and let the criminals escape. The one difference here is that Barnes’ crusade is fueled by the insanity-inducing, rage-increasing blood of Alice Tetch, as opposed to Stallone’s Judge Dredd, who was mostly just fueled by anabolic steroids.

Anyway, Barnes lures Jim Gordon, who knows the Commissioner is guilty of murdering Dr. Maxwell Symon via bathroom wall, out to one of the 4,000 warehouses on the outskirts of Gotham City. This would all be intriguing–Jim as the straight-laced detective who knows the truth, Barnes as the once-righteous man guilty of a horrendous crime–if Gotham hadn’t already played out this exact scenario with the roles reversed midway through season 2. At that point, it was Jim hiding his murder of Theo Galavan, and Barnes was playing the role of “Hey, I know you totally murdered that guy but let’s still go on car rides alone together.” If anything, Gotham forgetting it’s own history severely undercuts any dramatic weight behind Barnes’ transformation. Oh no, he’s KILLING criminals now…just like every single member of the GCPD has done at least once. Hell, Harvey Bullock almost killed Jim back when a Reference Guide was just a Recap, and now that’s under the bridge.

Not to say this wasn’t all wonderfully (and occasionally overly) acted — I already said last week that, due to all the space in his skull, Michael Chiklis is a tremendous actor, and “terrifying cop with a shotgun” is his natural state. Ben McKenzie looks so much more at-home playing a Gordon in a tie, and not nearly mentioned enough is how much Donal Logue adds to this show just, like, with his presence (“I was gone for like an hour!”). But hoo-boy, does the Tetch-saga now feel like a whole lot of buildup to a whole lot of nothing. We’re left with Barnes inside an Arkham cell yelling “guilty” over and over again, and an empty GCPD Commissioner’s office that Jim can’t help but stare at longingly. Don’t even think about it, Jimbo. Mustache first, promotion second.

Hey, speaking of staring longingly at something that is vastly inappropriate: 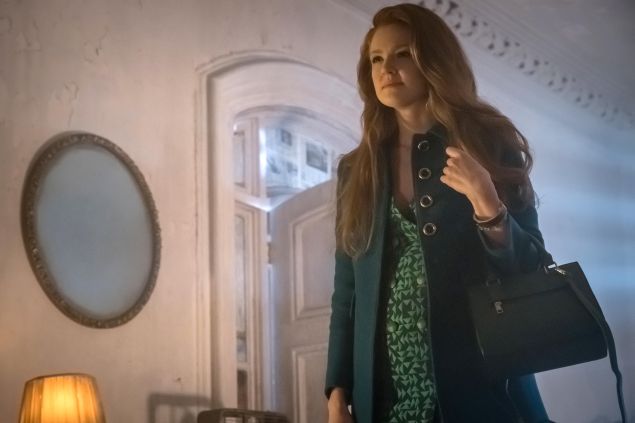 Dear sweet Jared Leto’s Joker, this Ivy storyline. It is everything I feared it’d be and, somehow, against the laws of human decency, even more. If you’ve missed it, Gotham retconned Claire Foley’s young Ivy Pepper–presumably the future Poison Ivy–by having Marv the “Reverse Fountain of Youth” age her into the body of a 28-year-old. Her body, but not her mind, which is important to remember as she slinks around in low-cut dresses and seduces rich men to gain access to their valuables. By “important”, I mean “in order to stay off most major FBI watch-lists.” Sure, Gotham introduced the idea that Ivy is simultaneously experimenting with mind-controlling plants, but it also introduced this exchange into my brain forever and ever and ever:

Ivy: When you look like this, guys just come up to you and give you stuff. Half the time you don’t even have to steal it.

Selina: Hmm, and what do you give them?

Ivy: I have ways of getting what I want.

Of course Bruce Wayne, because his Batarangs literally just dropped and his hormones are all over the place, willfully gets involved in all this after Ivy steals a mysterious necklace from a wealthy art collector. Inside the necklace is a key, which some dudes wearing sick Tom Hardy Bane/Darryl Dixon mashup cos-play want bad enough to put a crossbow bolt through the art collector’s eye. Where is all this headed? I predict somewhere uncomfortable!

Finally, Edward Nygma finally parses out that Isabella’s death was no accident. His suspicions start when he realizes the train tracks are only 4 blocks from Isabella’s apartment–“Who falls asleep four blocks from their home? No one!”–which, speaking as someone who has fallen asleep before leaving the driveway, is bullshit. But a blind homeless man confirms there was screaming, and a quick trip to the GCPD impound station proves her breaks were cut. SO, putting all these pieces together, Nygma, master of riddles, hyper-attentive genius, sets his sights firmly on…Butch. Oswald, who spent most of this episode posing for a truly terrible portrait, is thrilled with this development.

So, going forward into Gotham’s final two episodes before the winter break, we’re looking at 1) A passion-fueled gang-war between Eddie, Oswald, and an innocent Butch 2) A redeemed Jim Gordon rising the ranks to his rightful place while struggling with his feelings for Lee, and 3) Selina, Bruce, and Ivy off on a treasure-hunt adventure similiar to The Goonies, but if Data was played by a 35-year-old Jackie Chan.

As always, let’s run down every reference, fact, and nugget of Bat-history brought up in season 3, episode 9, “Executioner”

I mean, probably not…but MAYBE. Though Dredd did originate in comics published by IPC Media, DC Comics did briefly own the license to the character in the 1990s, a time-period during which four Batman/Judge Dredd crossovers showed up. Plus, Danny Cannon, an executive-producer on Gotham, totally directed the 1995 Stallone movie.

But, also, like I said, probably not. He’s just as likely to be the actual Executioner, a character that appeared exactly one time (Detective Comics #191, in 1953) but does spend his nights killing criminals that escaped from jail. He looks…a LOT less like Michael Chiklis, though. 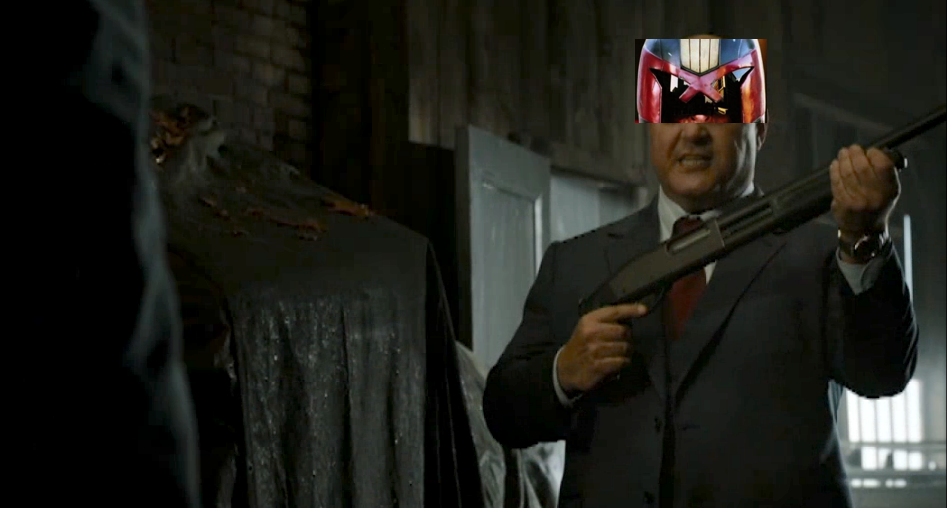