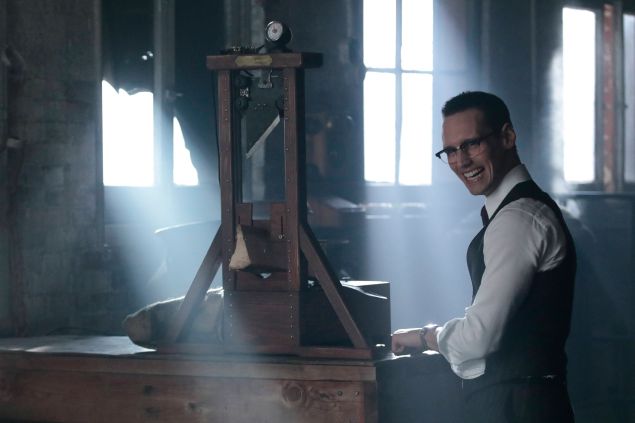 [As an ode to the title of this week’s Gotham, “Time Bomb”, I wrote this recap while listening to Rancid’s song of the same name. It was a nice reprieve from my normal, more Gotham-appropriate soundtrack, which is a mixture of one, long droning air horn noise and that recorder note that makes you poop your pants]

Well, surprise surprise, it turns out you can’t even get engaged to the son of a notorious crime boss in Gotham City anymore without having to worry about him getting infected with magical carnie blood and turning into a hulking rage-monster. Gentrification is a bitch, man. Or should I say Tetch-rification?

Moving right along after that A+ joke that we will never speak of again, is anyone really surprised that Mario Falcone came down with a case of the bad-bloods? I mean, Gotham already pointed to the mysterious Band-Aid on the back of his neck that might as well have had the word “FORESHADOWING” written on it in sparkly glitter-letters. And then we have the very first scene of this episode that, similar to all my family gatherings, started with a delicious pasta dinner and ended with an exploding car and the death of a valet. But before all that, Carmine Falcone was casually questioning how nobody noticed the downfall of Commissioner Barnes, and his son was just like “Well, it’s not like you can’t hide super-strength. Anyone could hide super-strength. Even me, hypothetically” as, I assume, he tied a dinner fork into a knot under the table and fantasized about strangling the homeless.

So by the time Mario is catching Lee leaving Jim’s apartment–and, presumably, the entire rehearsal dinner is pissed neither the bride or groom bothered to show up–and giving in to the voices inside his head, it’s not exactly a shock. But that’s not to say “Time Bomb” wasn’t an interesting hour of Gotham. It was! It’s just that very little of what made it entertaining had to do with this central love-triangle, which is definitely a cute triangle because all three of these weirdos just ain’t right.

No, but that Court of Owls storyline, with Bruce, Alfred and Selina traipsing through sewers, teaming up with secret societies to search for ancient, secret Gotham City artifacts — oh yes, that is the type of good-old fashioned Gotham dumbness I can sink my talons into (once I purge the memory of beloved Batman character Alfred Pennyworth getting hypno-bonered by a 15-year old girl out of my head, of course). As it turns out, those masked henchman from last week belong to a group called The Whisper Gang, an organization so obsessively concerned with secrets and loyalty that ten minutes after meeting Bruce Wayne they explain who they are and what they’re entire plan is, then break out a helpful, detailed map in case he was having trouble following along.

The Whisper Gang and the Court of Owls are long-time enemies, presumably because if it’s one thing owls hate, it’s secrets. The key that our heroes found in that necklace last week unlocks a secret vault at the heart of Gotham, in which lies the solution to taking down the Court of Owls once and for all. What is it? Very unclear! Probably an embarrassing photo from the office Christmas party. Either way, Bruce takes this as his cue to get back into the Owl-hunting game, because no way the all-seeing, all-knowing Court of Owls finds out about this and decides to slaughter most of the whisper gang.

So, a little later in the episode, the all-seeing, all-knowing Court of Owls finds out about this and decides to slaughter most of the Whisper Gang. Well, not most, like two dudes, but the Court of Owls member wearing the movie-accurate Green Hornet costume took them out prettttttty easily. I wonder how susceptible this guy is to plant-based love potions cooked up by an inappropriately-aged girl in a 27-year old woman’s body: 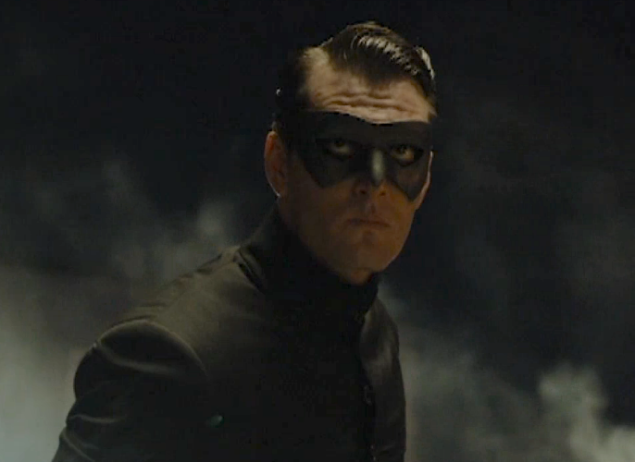 Based on his mask, the answer is “very susceptible.” FOX

Meanwhile, in non-Owl-related matters, Eddie Nygma has kidnapped Butch and Tabitha, and is torturing them with electricity and a mini-guillotine he bought from Mel Brooks’ Rabbi Tuckman:

Nygma busts out his best Jigsaw impression and makes Butch and Tabitha play a game: Tabitha can either lose a hand, or stop the guillotine but electrocute Butch to death in the process. Despite the fact that I think the track-suit Butch was wearing was made of enough rubber to save his life anyway, Tabitha chooses the former option and loses her hand. But not before Butch confesses to killing Isabella…with a bullet through her head. As we, and Nygma, know, Isabella actually died from not knowing how to use a steering wheel.

And that’s exactly what is coming to Gotham City, a war, being fought on multiple fronts. Edward Nygma against Oswald Cobblepot, with Barbara in the middle. The Whisper Gang against the Court of Owls, with insane-brained Mario (and his sketchy crime boss father), stuck somewhere in between. And, underneath it all, is Bruce and Selina holding a key–like, a literal key–to everything.

Finally, I’m pretty sure Oswald hasn’t left his house in more than seven episodes, which will only not be a huge bummer if he emerges looking like Danny DeVito circa 1992.

As always, let’s run down every reference, fact, and nugget of Bat-history brought up in season 3, episode 10, “Time Bomb”

THE WHISPER GANG / COURT OF OWLS

Someone at Gotham must be a big fan of the recent Batman run (2011-2015) by writer Scott Snyder and artist Greg Capullo, which introduced the world to both the Court of Owls and The Whisper Gang. The Whisper Gang in the comic books are pretty much the same as Gotham‘s take–a crew of insane Ukrainians that graft metal shoe-boxes onto their faces to keep from snitching–so not much to report there. The Court of Owls, though… 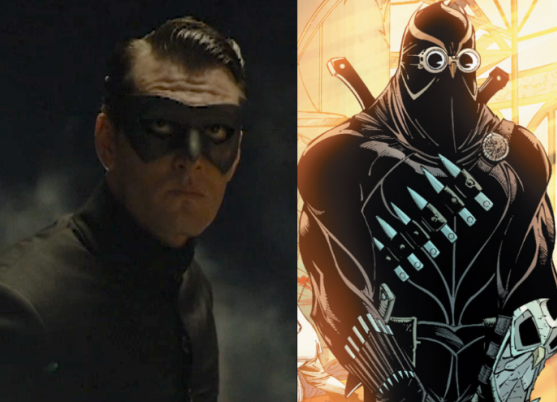 Assuming the dude who wrecked the Whisper Gang’s collective shit is a Talon–the Court of Owl’s undead, unstoppable assassins–it’s safe to say Gotham took a bit of a visual departure from the comics. As you can see above, artist Greg Capullo went for a more “terrifying, loosely-owl-themed killing machine” aesthetic, where Gotham took a more “Green Lantern, But If He Played Bass in My Chemical Romance” approach. 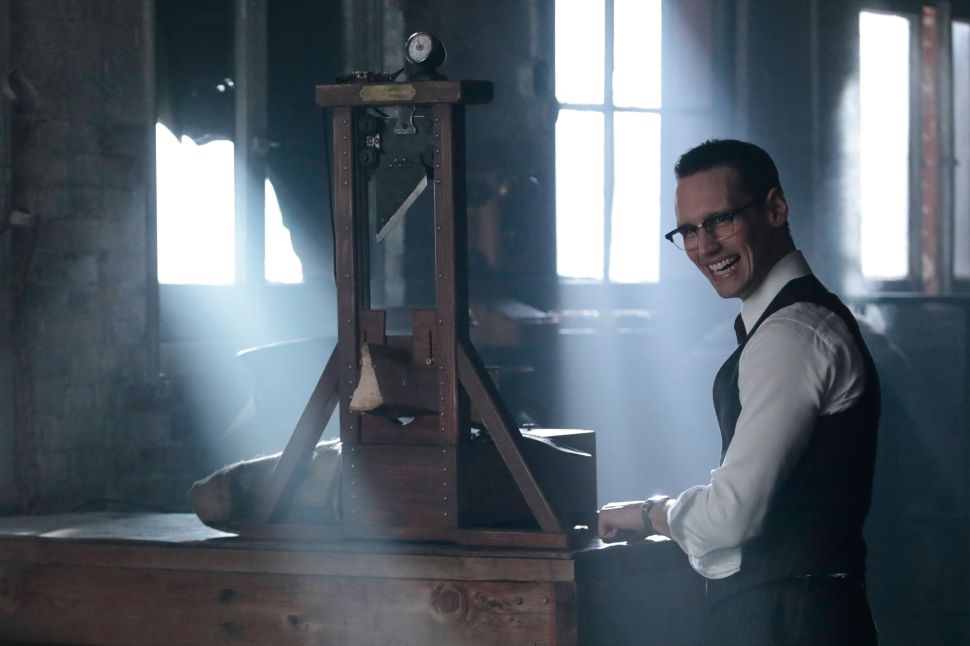