Beer is more popular today than ever before, thanks to the booming craft beer industry that’s expanded rapidly from small scenes in cities like Burlington, Vermont, to Europe and beyond. Last year, the number of operating breweries in the U.S. grew 15 percent to total 4,269—the most at any time in American history. Small and independent breweries now account for 99 percent of those in operation.

While people who indulge in craft beers are quick to deem themselves enthusiasts, those who brew them do not want to be known as such. Rather than beers fans, they’re keen on making it known that brewing is a real science. Craft breweries get started with teams of molecular biologists, engineers and other scientists, and several universities now offer programs in brewing and craft beer education. It’s all about precision and understanding the ingredients to their core and, of course, marketing too. With thousands of breweries now operating in the U.S. alone, having a six-pack that stands out on the shelf is as important as the taste.

But there’s something refreshing about remembering the tradition and simplicity behind some of the beloved, historical brews that have become anomalies in a beer world overrun by science, branding and everything niche.

Guinness for example, is so traditional it outdates our known process of making beer—the original recipe didn’t even include yeast. During an exclusive tour of the Guinness archives at the company’s storehouse in Dublin, I learned firsthand how the brewery’s historical past has helped it grow to become one of the most successful beers in the world, selling 1.8 billion pints in 120 countries annually.

Guinness was born in 1759 when Arthur Guinness started brewing at the St. James’s Gate Brewery in Dublin. On December 31 of that year, he signed a 9,000-year lease for the property with a down payment of 100 pounds and annual rent of 45 pounds. His exact signature from the calfskin document is still around today, seen on every single Guinness bottle and can.

There’s so much history attached to Guinness that the archives Colgan has dedicated her career to organizing, preserving and helping the rest of the team learn from would stretch 4.5 miles if laid out. Many of these items are more than 200 years old.

One special artifact is Arthur Guinness’ brewer’s notebook that dates back to 1801. While it was most likely physically penned by one of his sons (three of whom joined him in the business—he had a total of 21 children, 10 of whom survived childhood), it provides a spectacular look into the history of Guinness and beer in general.

“What’s really interesting about this book is the age of it—the fact that we actually have brewing recipes going back to that date,”Colgan said. “And there’s actually recipes for a number of different beers. So while we might be more familiar today with Guinness as the pint with the creamy head, that wasn’t even invented back at this stage. But actually, Guinness has always been known for Brewing different types of beers, and that’s evidenced in this book here.”

While Guinness may employ a team of scientists today, the book and its recipes (which again, didn’t even include yeast) reveal just how unscientific the company was at its inception. The book describes ground malt before the idea of it existed and mentions hops without much of an understanding of their taste. Today, hops are king of the craft beer game, and brewers and enthusiasts alike not only know all about the different varieties, but view the differences in varieties as crucial in determining flavor.

“He doesn’t talk about what variety of hops though. So while the style of IPAs arose as being the export for ale, this was his export for porter. He’s interested in hops purely for their preservation value,”Colgan said.

The long-time traditions of Guinness, however, have not hindered progress. Rather, they’ve helped improve it. The brewery has released more new beers in the last three years than they have in the last 15. And last year, the Guinness Brewer’s Project was launched as a smaller brewery on the St. James’s Gate property as a way to focus on new, innovative beers. The first two brews to come out of this lab were actually inspired by recipes taken directly from Arthur Guinness’ 1801 brewer’s notebook, and the labels for some of these new beers have historical significance as well. Back in the 1800s each pub was tasked with designing their own label because Guinness only brewed, not bottled. In the archive lies books containing hundreds of labels, which the team went back to for inspiration when designing the bottles for new beers, such as Guinness Extra Stout.

While most of these new beers from the Brewer’s Project aren’t for general sale, you can try them on the premises. At Guinness’ International Stout Day festival last month, I tried some that were a little eccentric. The Double Coffee Stout wasn’t for me (I hate coffee), but the Sea Salt & Burnt Sugar Stout was surprisingly delicious and a crowd favorite. The Apple Stout was a perfect alternative to those who find ciders too sweet.

The innovation is necessary now that craft beer has reached Ireland, where Guinness brews 98 percent of its signature draught. Fifteen years ago, there were only five breweries in Ireland, and now there’s more than 40. But the competition is hardly steep—one out of every three beers drank in Ireland is the signature Guinness Draught with the dark body and creamy white head. And many of the other 66 percent are Guinness too. In Ireland there are more varieties than are available in the U.S. such as Hop House 13 and Guinness Smooth.

In Ireland, many pubs have giant Guinness signs on their exterior rather than their own names. If you look around, every person around you is drinking the brew. The devotion goes way back, and is something that only exists because of a legacy that lies in tradition. The company was in the Guinness family for six generations, and it was so ingrained in Irish culture that the company didn’t even advertise for its first 170 years.

A past tradition in Ireland, and especially Dublin, has been that when you donate blood, you’re offered cup of tea or a pint of Guinness. Everyone chose the Guinness.

The Irish government even uses the same harp Guinness has as its trademarked logo. The only difference is that it’s flipped, which was Guinness’ stipulation in requiring the government to use it.

“That’s how closely Guinness is linked to Ireland,” Carey said. 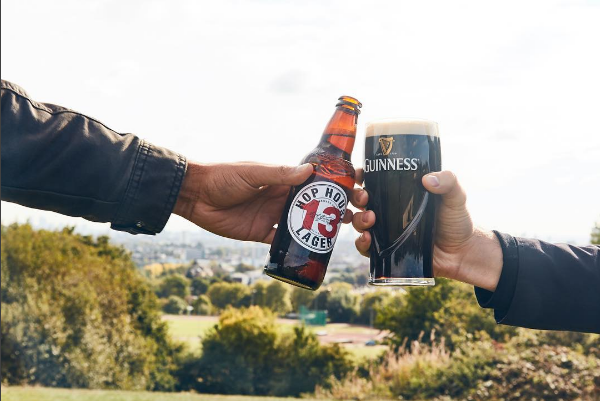