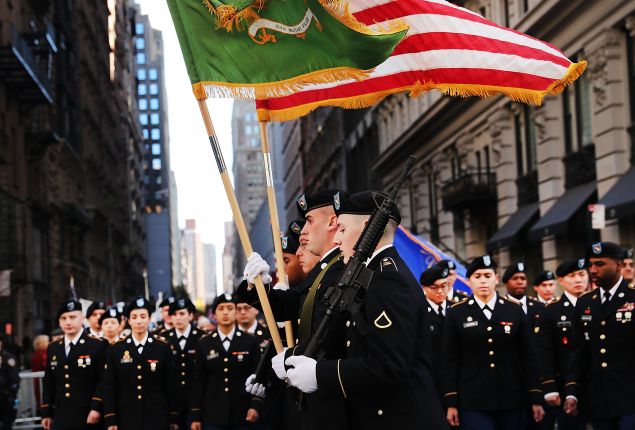 The U.S.S. Iwo Jima, one of the Navy’s largest, most versatile ships, docked in Manhattan last week. More than 1,300 members of its crew and embarked Marines enjoyed the city’s hospitality; and in turn New Yorkers showed them our appreciation for their service and sacrifice. A contingent of these young men and women marched up Fifth Avenue in the Veterans Day parade. They were among the 300 groups—40,000 strong—who participated in the 1.2-mile march.

Shortly after the parade, we were invited aboard the Iwo Jima to share in this solemn and celebratory occasion. We came away humbled, admiring and concerned.

Meanwhile, at Brown University, American flags displayed for a Veterans Day ceremony at the Ivy League school were ripped to shreds—just as some students at American University set flags on fire to protest a country “going down in flames.”

Let’s begin with Veterans Day itself as a lens into our divided country.

The holiday is intended to thank the people who have served—and are serving—in the United States military. (It should not be confused with Memorial Day, which honors military people who have died in service to the country.) Veterans Day is celebrated in concert with Armistice Day and the U.K.’s Remembrance Day—the end of hostilities in World War I—on the 11th hour of the 11th day of the 11th month of 1918.

One year later, President Wilson issued a message to the American people recognizing the sacrifices so many made in the war to end all wars. Seven years later, Congress adopted a resolution calling for the President to issue annual proclamations in support of observance and celebration, but it took 12 more years for them to finally pass a bill establishing the national Armistice holiday. Not only was the name changed in 1954, so did the focus: All veterans would be honored, not just those who had served in World War I.

This year’s celebration in New York commemorated the 15th anniversary of the attacks on 9/11 and honored the veterans of the Global War on Terrorism and the first responders at Ground Zero. A chat with Dan McSweeney, the president of the United War Veterans Council—organizers of the parade—reminded us of the ultimate sacrifice made by so many. We hadn’t remembered the Coast Guard’s role in evacuating more than 500,000 people from lower Manhattan that Tuesday morning and are grateful to McSweeney for not allowing us to forget.

The program aboard the Iwo Jima took place in the ship’s vast hanger deck—a space almost 800-feet long and 100-feet wide—that typically serves as the maintenance and repair depot for the several dozen helicopters, Harrier jets, and V-22 Ospreys that transport the 1,800 Marines typically embarked aboard the ship. (The Marines’ other vehicles for getting ashore are giant hovercraft that float out on six inches of water through the vessel’s giant rear door.)

But on this night, the hangar deck was transformed into a giant buffet, complete with ice sculptures, a talented jazz combo and surprisingly good acoustics for speakers who were only occasionally interrupted by bosun’s whistles signifying that this was still a capital warship on standby, capable of getting underway with just an hour’s notice. (Many of the younger crew were excused from the formal proceedings and could be spied—or more accurately smelled—returning to ship with local pizzas. The speakers, which included the commanding officer—who came up through the enlisted ranks before attending the Naval Academy and receiving his commission—the admiral in charge of the 14-ship task force of which the Iwo Jima is a part, and New York City’s first commissioner of Veterans Affairs, retired Brigadier General Loree Sutton.

We had not been aware that the Iwo Jima had just returned from a multiweek mission to Haiti following Hurricane Matthew. The storm killed more than 1,000 Haitians and devastated the island. The Iwo Jima, its air wing and its Marine expeditionary force delivered more than 559,000 pounds of food, water and supplies to civilians. In addition, the ship’s 600-bed hospital provided emergency medical treatment to thousands of wounded and ill Haitians.

Humanitarian missions are an important adjunct to the ship’s mission. But very soon it is likely that the Iwo Jima and her crew will sail into harm’s way. We welcome them back to New York any time—with or without a parade. We wish the fortunate students at Brown and American University and at protests around the country had a deeper understanding of the good that American armed forces do around the world.

Until then, we urge Congress to ensure that these men and women have the resources and training they need to do this important and selfless work. And we wish them Godspeed. 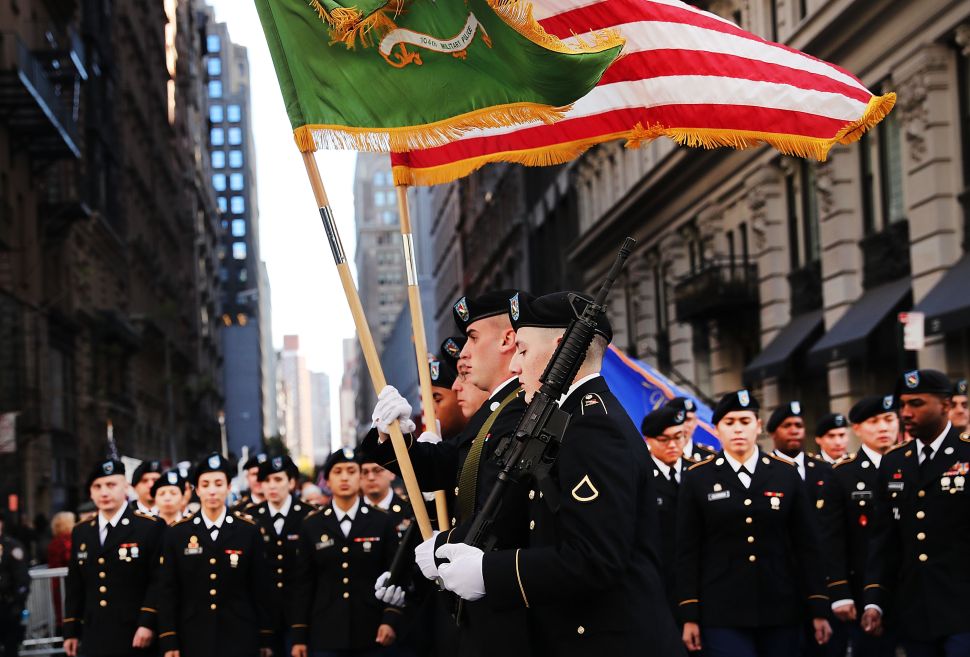