Beautiful, strange, spontaneous, frightening, skeletal, spacious, arid and elegiac: Metal Box by Public Image Limited is made up of the bleached white bones of art rock, disco and reggae, reassembled into a gorgeous noise that defies easy description. It is also one of the best albums of all time.

In the era of Radiohead, when any lantern-jawed, hash-hazed Brit dropping a marble on a piano string with a lot of reverb on it gets called a genius, let’s honor a record that is an Everest in effective, natural-flowing art rock. Metal Box is, perhaps, Post-Punk’s signal achievement, its Pet Sounds.

(Note: Metal Box, PiL’s second full-length album, was originally released in late November 1979 on three 12” 45 rpm records packaged, beautifully but inconveniently, in a film canister; not long afterwards, the same music was put out, far more conveniently, as a double LP called Second Edition. For the sake of simplicity, throughout this article we will be referring to the dual-titled release by it’s “first” name, Metal Box.)

During times of great anxiety and uncertainty, music has the ability to provide welcome distraction, and even courage. To perform this function, the music doesn’t necessarily have to be issue-oriented: It can just be something that makes us happy to be alive, or reveal the magic of human potential. Music can also provide a pathway to a meditative transcendence, where the mixture of repetition, novelty, familiarity and ecstatic energy creates a singular focus and a universe-wide sense of expansiveness and openness.[i]

Metal Box, which turns 37 this month, is simply an album that blows minds, re-writes rules, decimates expectations, and, well, tells the truth. It also continually reaffirms my belief in the power of music and creativity, which is especially effective when it is unhinged and elated.

In 1977 the Clash may have sung “No Elvis, Beatles or the Rolling Stones,” but in actuality they produced records entirely modeled after the thrush-mouthed, star-riffed sucker-punching rock bands of the past. However, Metal Box actually takes the steps that punk rock only claimed to take—and truly, nothing on it has anything to do with Elvis, the Beatles, or the Rolling Stones. The album is the soundtrack to the “No Future” the Sex Pistols had promised.

Metal Box, to misuse the words of J.B. Priestly, represents a “Great jagged Crack in the looking Glass.”

It’s courageous and new, but never insists on itself; this is an insanely hard trick to pull off. In fact, Metal Box is nearly as much a departure from PiL’s debut, First Issue, as First Issue was from Never Mind the Bollocks.

Although we cannot overstate the importance of First Issue (along with Magazine’s Real Life, it can be seen as the definitive beginning of the Post-Punk movement), First Issue contained echoes of the past; three of its tracks (“Religion,” “Low Life” and “Attack”) are just slightly shattered, scattered and skinned Sex Pistols’ songs. Metal Box makes a truly complete break, not just from the Pistols but also from any familiar “mainstream” punk or Post-Punk reference points.[ii]

The first lyrics we hear on Metal Box are growled/whined in a strange, low, dream-like drone. They very accurately preview the novel experience we are about to embark on.

To appreciate just how important these first vocal lines of Metal Box are, it’s helpful to recall that John Lydon was a deeply intentional lyricist who, at the top of his most important songs, often provided literal descriptions of the effect the music might have on the listener.

The Sex Pistols’ first 45, “Anarchy in the UK” (November 1976) begins with Lydon’s salvo, “Right! Now! I am the Antichrist.” No deep analysis of this is necessary: Lydon is announcing that this is the sound of here and now, and he is the messiah of a new, heretical musical church. On PiL’s debut 45, “Public Image” (October 1978), Lydon immediately makes it clear that he is frustrated with the limitations of being Johnny Rotten and the clichés of punk fashion, and he is now declaring his independence: “Hello! You never listened to a word that I said/You only seen me for the clothes that I wear.”

So it’s no surprise that Metal Box begins with a lyrical couplet that is just as deliberate. This comes about 38 seconds into “Albatross,” the long, hypnotic, morphine-paced yet autobahn-steady song that opens the album.

In other words, “Slow down, all ye punk fans who expect the chugging pace of the Pistols or the frantic rhythms of the first PiL album! Just slow yerself down. Take a breath. Breathe in. Breathe out. O.K.? O.K. Now, all your expectations about who I am and what I might sound like are about to be revised, twisted, reversed…we are disposing of that ungainly bird of expectation, and heck, you may not like it.”[iii]

The formula for PiL’s sound on Metal Box is as devastatingly simple as it is original: the most recognizable element is Jah Wobble’s window-rattling, mega-simple melodic bass lines, which owe a primal debt to ’70s dub and reggae. But here’s the atom-splitting moment: instead of setting these seismic woofs to the syncopated, swaying 2-beat of reggae, they’re set to the metronomic 4/4 of Krautrock.

This creates a hypnotic squareness to everything PiL does, and when paired to the vast minimalism of Metal Box’s performances and arrangements, you have one of the most distinct and pure recordings ever released in the pop rock era; it’s kind of like listening to Erik Satie perform Chic.

The chordal framing Wobble provided was necessary, since on Metal Box guitarist Keith Levene has completely abandoned using the guitar as a “standard” accompaniment instrument (and keyboards factor only sparingly, and rarely to define chords). A number of songs (“Bad Baby,” “The Suit”) lack any guitar, and when he does play, Levene sounds like he’s casting handfuls of crystal seeds on a shiny tin floor, with occasional nods to Can’s Michael Karoli and some strange ghost of Hank Marvin.

Considering we are only a year past Levene’s inventive but relatively standard guitar work on First Issue, this transformation is remarkable; off the top of my head, I can’t think of another “band” guitarist who so completely re-addressed his relationship to his instrument between one album and the next.[iv] It almost sounds like Levene patiently waited for the guitar to tell him to add a click here, a bent paper clip there, a harp-like shiver over yonder.[v]

In fact, it sounds like everyone on Metal Box didn’t play or sing a single note they didn’t absolutely have to, yet Lydon, Levene and Wobble maintained an overriding mission to create music of cohesion, intensity and great aural sensuality.

Yet never, not once, does this restraint and austerity draw attention to itself. PiL’s use of minimalism in the service of art rock seems as natural as the Ramones‘ use of minimalism in the service of pop rock. Likewise, PiL employ atonality and improvisation as an aspect of their palette, yet never allow these elements to dominate the record. This blend of hypnotic rhythm, emptiness and discretionary dissonance is virtually unique, almost as if PiL had studied Beefheart, John Cage, Scratch Perry, Neu!, The Third Ear Band, Gong and Can and created a gorgeous, starlit cave painting based on their impressions.

This is an album that gets inside your heart and your head, which is to say that it fully occupies and distracts both; so very, very few records have this ability to both seduce you, and totally and completely mess with your mind. Perhaps Metal Box is a mad scientists’ quick sketch of Dark Side of the Moon. When many of us first heard Metal Box, we staggered about confused, but we soon realized we were hearing the great jagged crack in the looking glass, and much like when we heard “Hallogallo” or “Blitzkrieg Bop” or even “You Really Got Me” for the first time, nothing would ever again be the same.[vi]

[i] These thoughts on the mesmerizing power of music are greatly influenced by Dr. Jennifer Jo Brout’s pioneering work on regulatory music and music therapy.

[ii] Priestly was talking about World War I, an event that killed nearly 20 million people and re-drew the boundaries of the globe in profound ways that are still effecting us today. This is of considerable more importance than a record by a rock band, no matter how good that record is, and I apologize to anyone who might be offended. Heck, I’ve offended myself.

[iii] Likewise, “Four Enclosed Walls,” the first track on PiL’s next studio album, The Flowers of Romance (1981), begins with a similar warning/tip-off: “Allah! Allah! Doom sits in gloom in his room/Destroy the infidel.” This accurately describes the claustrophobic, faux Middle-Eastern and West African landscape you will enter for the next 35 minutes, and the fact that the music on Flowers of Romance bombs its own past.

In its own way, Flowers is almost the equal of Metal Box, but its studio-intensive, nearly agoraphobic environment makes the album seem more experimental and severe. With Wobble out of the band, the album is virtually bass-less (drummer Martin Atkins’ thumping, steady and intense toms cover the bottom end of the music), and guitar only appears on one track. Both tight and unhinged (it is both the strangest and the most precise “early” PiL album), Flowers feels more like a true work of art, and less like a work of pop art.

It was the furthest outside-the-box PiL would ever go; after the unapologetically un-mainstream Flowers, Lydon corralled PiL into an occasionally very effective but traditionally structured alternative rock band. I must note that I am deeply glad that this piece compelled me to spend a little more time with Flowers of Romance; frequently overlooked, it’s a brilliant and original record and one of the 25 best albums of the 1980s.

[v] Let’s not minimize the impact of Levene’s playing on First Issue. It was profoundly influential, and the basis of the sound the Edge used in U2.

[vi] It would be entirely remiss if I didn’t mention Metal Box’s bizarre and often wonderful deformed twin, The Legend Lives On… Jah Wobble in “Betrayal.” Released about half a year after Metal Box, Wobble’s first solo album is a strange and playful mixture of the artistic and the ludicrous. Utilizing some of the same basic tracks as Metal Box, it’s almost like a Dada take on Metal Box (imagine Metal Box remixed by Viv Stanshall), and though far from essential, it’s worth picking up. Also, the understandable conflict over Wobble’s use of existing PiL tracks on this record led to his departure from the band.

Likewise, let me throw in a very good word or two for Paris Au Printemps, the somewhat perverse and wonderful live album PiL released in late 1980. The performances (by the very best PiL line-up—Lydon, Levene, Wobble and Atkins) are sharp, clear and intense; the “perversity” comes in the omission of some of PiL’s most famous material, and the fact that the audience is clearly very unhappy that they are not seeing the Sex Pistols. 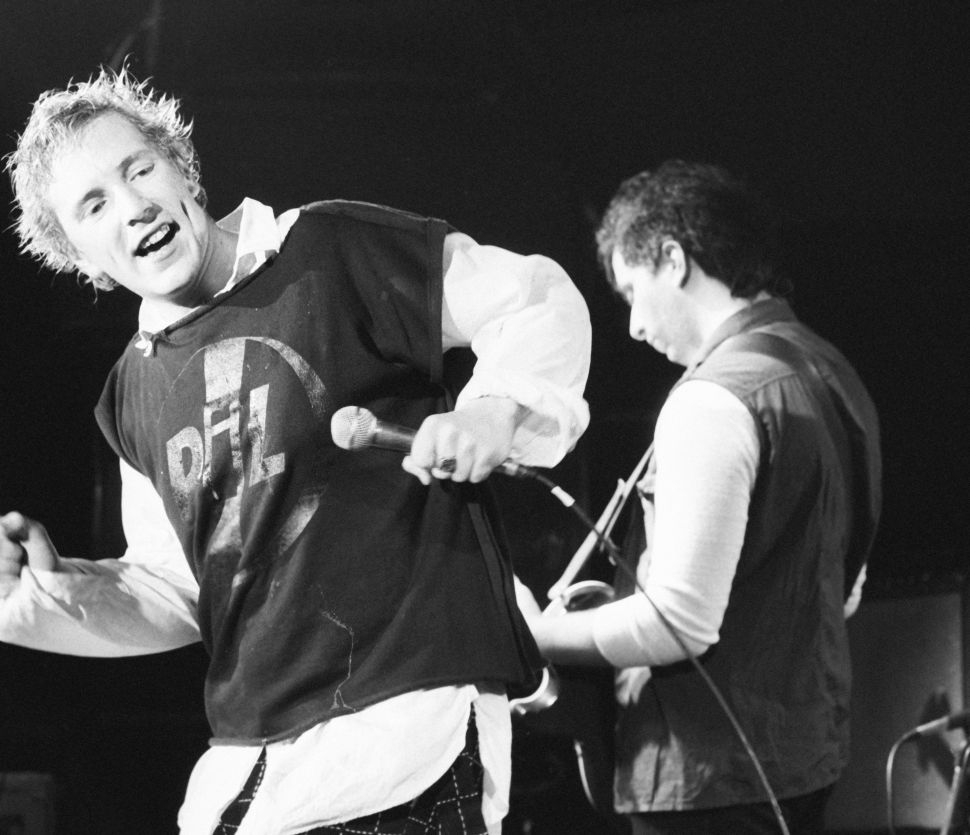