The most important election of our lives is 24 hours away, and once again rock ’n’ roll has completely failed us.

We always knew music could move us, amuse us, distract us, encode extraordinary memories and act as the soundtrack for some of our most spectacular life-movies. We always knew that a song could wrap around our ears and our hearts and save the day. Music is so beautiful and essential that way, and it always will be.

President Nixon announced the withdrawal of all American troops from Vietnam on January 23, 1973, exactly nine years and 10 days after Dylan released “The Times They Are A-Changin’.” Margaret Thatcher became prime minister of the United Kingdom two years and three months after the Clash released “White Riot.”

Oh, and not only did louche, drooling Jim Morrison and the Doors not end the Vietnam War, the Lizard King’s father, Rear Admiral George Stephen Morrison, literally started it (Jimbo’s less decadent dad was commander of U.S. Naval forces at the Gulf of Tonkin; under his watch, in early August 1964, the Navy faked an attack by a North Vietnamese boat, creating the pretext for the United States to make a full entry into the war).

This amazing fact is a gorgeous metaphor for the role rock music and the sounds of the counterculture have played in American politics.

I do not want to diminish the emotional or social impact of rock ’n’ roll, but it has succeeded in inspiring people to run to Hot Topic, and failed in inspiring them to storm the Bastille.

Rock ’n’ roll, which makes such frequent and dramatic use of rabble-rousing sloganeering, has been virtually a complete washout when it comes to meaningful political action or instruction. Again, I do not want to diminish the emotional or social impact of rock ’n’ roll, but it has succeeded in inspiring people to run to Hot Topic, and failed in inspiring them to storm the Bastille.

Artists don’t mind spouting their political opinions in interviews, and will play a benefit here or there or make a cute video affirming their beliefs. But the idea of doing anything that might cross a fence and target people on the “other” side, or most pertinently actually risk confrontation, seems to be absolutely anathema.

We all love to piss off our parents, and we all love to get stared at when we walk into Political Science class with a nose ring, and wow, when we dyed our hair the day before graduation, boy did grandma make a face. And the whole time I walked across that stage to get my diploma with my pink hair I could hear a Clash song playing in my head. Boy, I sure do fight the system.

Chances are, your favorite “rebel” rocker thinks exactly like that.

My words, my deeds, my opinion, my anger, my ire, my bile and my passion may define me, they may guide my vote, they may even inspire and annoy a few people within the sound of my voice. But this tiny island that is my thoughts and beliefs holds little sway outside of its ability to be an infinitesimal dot in the beautiful and diverse pointillist picture that is our country.

Even my vote means virtually nothing on its own, though I do appreciate that when this grain of sand is added to others, a Republic is built. But what I think doesn’t reach far beyond, above, or below the shadow I cast on a sunny day.

However, there are others who, through the force of their fame and character, possess the ability to influence large groups of people.

What if Bruce Springsteen had gotten into a van and trailed Donald Trump to every campaign stop over the last four weeks (or even the last two). Imagine if every time Donald Trump set up to speak, Bruce got out of his van, strolled to a street corner or park a few blocks away, strapped on an acoustic guitar, and began to sing. Maybe he would sing songs about the working men and women who have always been his constituency, or maybe he would sign songs of Boardwalks or Vietnam, or maybe he would sing the old songs of freedom and unity that Woody Guthrie or Pete Seeger sang.

It wouldn’t have been that hard of a thing for Springsteen to do. In fact, it couldn’t have been that much harder than his recent book tour, which compelled him to stand, rigid and wax mannequin-like, next to an endless parade of ecstatic fans. Imagine the greatest and most popular populist singer in American history drawing attention away from our greatest populist pretender; Springsteen and his opposition would have become the story; they would have stolen the headlines.

It would have been the most magical act of musical activism in our history, and how hard would it have been to accomplish? Oh, and it would have probably sold more books than a book tour, by the way.

I single out Springsteen because he is one of the very, very few people who could have pulled this kind of thing off. For this kind of action to have succeeded, it would have required an artist that a crowd gathered to hear Donald Trump speak would have wanted to hear as much (or more) than they wanted to hear The Great Man. Lady Gaga or an Eddie Vedder, for instance, would likely have been shooed away from their perch or been harassed or arrested. But people would have rushed from Trump rallies to see Springsteen. News networks would have covered it as breaking news.

Of course Springsteen (whom I gladly admit is one of our most genuine and socially engaged superstars) made some video statements about his distaste for the GOP candidate. And he’ll perform at a rally for Hillary Clinton in Philadelphia tonight. Maybe these acts will even sway a few dozen votes here and there, but these kinds of gestures mostly exist so that people who already feel negatively about Trump can pat themselves on the back and say how great it was that Bruce agreed with them.

Bruce Springsteen chose not to make a difference. It may not seem that way, but he is one of the few Americans who could have actually taken an action like this and made a difference.

For generations, people have believed that rock ’n’ roll “stood” for something, that by endorsing it, one was fighting the establishment. This has all been utter bullshit. We’ve all been had.

Rock ’n’ roll is one of our saddest paper tigers. Do you know what a paper tiger is? That’s something that appears to be strong or threatening, but is in fact ineffectual and weak.

For generations, people have believed that rock ’n’ roll “stood” for something, and that by endorsing it and adopting its fashions and its slogans, one was fighting the establishment, taking on “the man,” taking part in a revolution. This has all been utter bullshit. We’ve all been had.

You confused the freedom to dye your hair with freedoms that really matter; you’ve thought that the right to be tattooed is equivalent to the right to vote or the right to marry who you want; you’ve assumed that the choice to piss off your parents is actually as important as whether you will have a choice to terminate your pregnancy.

You think rebellion is a ring through your nose. Google “Goodman, Chaney, and Schwerner,” then get back to me.

Listen, I am not condemning rock ’n’ roll in any way, truly. It has saved my life, it has defined my life, it is not only the soundtrack for every dream and desire but the goal of those dreams and desires, too; it frees us from the ordinary, allows us to burst through the crowded halls of expectation; it inspires us to be our truest selves. Nor am I condemning rock ’n’ rollers, those fortunate enough to have turned their dreams into our obsession.

Nor am I saying that every—or even any—artist playing rock ’n’ roll needs to suddenly “stand for something” or man the barricades. I am just saying that there sure are a lot of people who make the noise without making the effort.

Oh, and as for fundraisers, well, that’s good, solid work, and important work, too, and I applaud any and all artists who give their time to a cause. But there is little or no risk in playing a fundraiser. I am talking about the solid fact that only in extraordinarily rare circumstances do musicians do anything, in regard to any political or social cause, that involves taking a risk or alienating any significant portion of their audience, even though many rock ‘n’ rollers pose as precisely the kind of “rebels” who would do such a thing.

Of course there have been exceptions: Phil Ochs and the MC5 performed in Chicago’s Lincoln Park in the summer of 1968, as Mayor Daley’s stormtroopers lined up around them; always, always, Pete Seeger, Woody Guthrie, and others who stood up for the unions and stood up to the blacklist; musicians, including Bob Dylan, who joined the freedom fighters; the Mekons, Chumbawumba, and CRASS, who did everything they could to put their money where their big mouths were; the Rock Against Racism movement of the late 1970s, which went to great lengths to combat long-held tribal divisions amongst British rock audiences; and (perhaps less admirably) Gerry Hannah and the Squamish 5, Vancouver punk rockers who thought that singing about dismantling the sexist and militarist power structure wasn’t quite enough, and set off a few bombs.

My God, did any musicians actually take any risks when speaking about the election this year?

Did they ever bring their case to the other side and risk anger or ridicule, instead of just preaching to the converted?

Again, I don’t expect our rock ’n’ roll musicians to have guts, but stop acting like you do if you don’t.

Dear Green Day: This autumn, you tried to get a lot of press by going on a self-congratulatory club tour. You couldn’t have thrown in a few performances outside of Trump rallies from the back of a flatbed truck? Instead, you went on your little club tour so everyone would go, “Ohhhh, they are playing a small club, they are so punk rock.” Risk getting a punch thrown at you because of your political beliefs, and then tell me how punk rock you are. The Second Darrin from Bewitched was way more punk rock than you, at least he had the courage to come out of the closet.

At least Ted Nugent was willing to piss people off and lose fans and bookings. So for the first and only time, let me say that (at least for a little while) I admire Ted Nugent more than Bruce Springsteen, because he is a musician willing to risk something for his political beliefs. 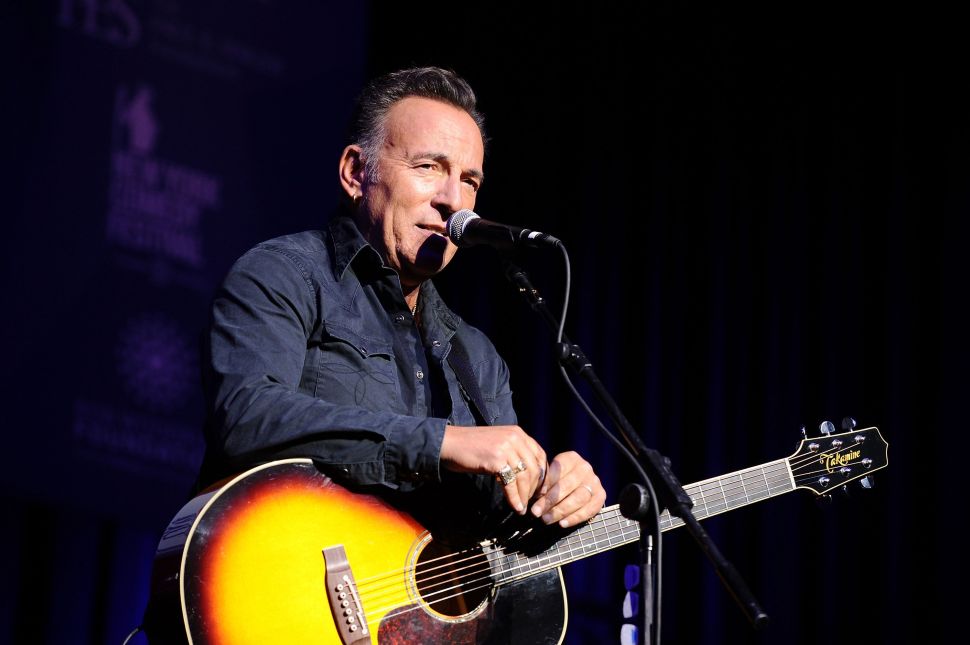