Some of those cameras you see at baseball games aren’t recording the game for TV stations—they’re making skeletal models of the pitcher that can be used to improve his performance.

Cameras like this were key to the Chicago Cubs’ World Series victory last night. While the team no doubt used good old fashioned baseball acumen to clinch their victory, they also had help from two companies doing pioneering work with big data.

Founded in 2o13 in Florida, Kinatrax’ first MLB client was fittingly the Tampa Bay Rays—the company then partnered with the Cubs last year. KinaTrax utilizes markerless motion capture technology: Traditional motion capture (used in movies like Avatar) records movement through markers that are affixed to the body of the subject. But KinaTrax uses the principles of sports biomechanics (more simply, the physics of sports) to get a greater understanding of pitcher performance, without any bodily markers.

The KinaTrax hardware is a series of high speed cameras which can record 300 frames per second, and which are situated in the seating area of the stadium angled toward the pitcher’s mound. As the pitcher steps up to the plate, these cameras take synchronized 3D video of each pitch, creating a skeletal reconstruction of the player’s movements—these videos are then annotated and tagged.

“We collect the baseline motion capture performance of each pitcher, over the course of a game or season,” KinaTrax president and co-founder Steven Cadavid told the Observer.

Of course, once teams have this information it needs to be analyzed. That’s where iMerit, founded in 2012, comes in: KinaTrax imports its skeletal reconstructions of home and visiting pitchers into iMerit’s analysis software. The India-based company, whose U.S. headquarters is in California, then produces datasets and anatomical models highlighting key points on the pitcher’s body—so far the system has analyzed 250 pitchers (more than half of MLB pitching personnel). These models can be applied to every pitch a player throws during a season.

“It can be used for performance guidance, and to figure out injury prevention,” iMerit editorial director Laura Guzman told the Observer.

In practice, that means being able to analyze and improve subpar pitching, and to pinpoint specific locations of stress throughout the body.  The system can also produce new models if the pitcher’s performance changes for some reason.

“If a pitcher didn’t have a great outing, we can see how the mechanics look compared to a great outcome,” Cadavid said. “If a pitcher bulks up in the offseason, we can take that change in body physiology into account.” (He added that iMerit “plays a critical role in what we do.”)

Cadavid said that in the future the KinaTrax/iMerit system could actually be used in games, to pull fatigued pitchers before they really start slumping.

While he couldn’t go into specific detail about how the Cubs used the system, Cadavid said the team was focused on understanding how to improve its pitchers’ mechanics, as well as identifying patterns and weaknesses in opposing pitcher mechanics. He also said the Cubs were “incredibly aggressive and ambitious” while working with the two companies throughout the season.

The Cubs did not respond to a request for comment—the team’s outgoing voicemail said the front office was taking a day off to celebrate the team’s World Series win. 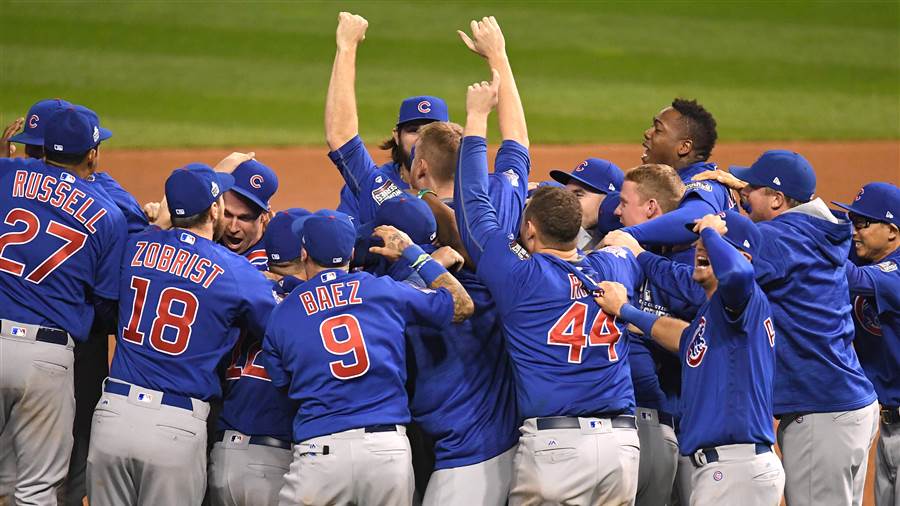