On Saturday night, during the formerly beloved Weekend Update segment, hosts Michael Che and Colin Jost went back and forth on jokes about Trump—an interesting move considering the racist, misogynistic and xenophobic president-elect endorsed by the KKK was famously featured in Saturday Night Live in 2015.  But then they came up to one joke that fell within that special zone between “tone deaf” and “harmful.”

I saw screenshots of this joke, watched the clip for myself and then watched it again in moderate shock. I tweeted about it with admittedly sparse commentary.

As a queer non-binary person, I’m personally happy about Tinder’s policy. It’s notable that a major dating company has finally acknowledged that people other than men and women exist. But the point that Colin Jost nor Saturday Night Live was trying to make—one later backed up by Jost himself via Twitter—is that the much buzzed about “identity politics,” a.k.a. focusing on the rights and issues pertaining to marginalized groups, trans and gender nonconforming folks in this case, is why Trump won. Soak that in, folks.

The reaction to my tweet was a mix of LGBTQ+ people, including many trans and NB folks who also felt personally offended; people who insisted it was just a joke; and lots of angry guys with 17 followers and display names like “Deplorable Jeff” misgendering myself and many others and mocking Trans Day of Remembrance, a day honoring the memories of trans people who have been lost to murder or suicide—a day that fell on the Sunday after this segment aired.

“Thirty-seven gender options!?” one might think. “Isn’t that a lot?” Well, there are a hell of a lot of ways that people identify, and having those identities acknowledged by a major dating app is significant. Now, I have all sorts of issues with Tinder, not the least of which are its shady business practices and the fact that it took this long to find a barely halfway decent method of including non-cis people. (While the options are obviously much more comprehensive than the previously existing binary ones, the interface still forces you to choose whether you will be in the search results of for those seeking “women” or “men.”)

One of the biggest benefits to options for trans and gender nonconforming people: It offers the ability to filter out people who are exclusively interested in dating cis people. At the very least, this minimizes the risk of an awkward conversation followed by romantic rejection. A more substantial effect is lessening the potential for an encounter with someone violent, should they find out your gender identity. Remember, the “trans panic” defense has been literally been used to defend murder. No one is saying that a simple joke is why trans people have been murdered at staggering numbers, but it’s still significant.

Remember when Daniel Tosh pointed at a female audience member and said, “Wouldn’t it be funny if that girl got raped by, like, five guys right now?” When the incident was met with outrage, his fans, including some comedians, was, “How dare you? It’s just a joke!”

The notion that it’s “just a joke” is not so different than the idea that words are merely words—sticks and stones can break your bones, but words can never yadda yadda yadda. This viewpoint removes actual person saying these words from the mix and turns the joke into its own separate entity without a context or speaker. And if there’s anything that we have learned in this election and its aftermath, isn’t it that words can incite profound damage? That the words of those with large platforms can sway their audiences, whether it’s for the subjectively best or worse. See: Fox News. See: Jon Stewart. See: Tomi Lahren.

To the people saying, “It’s just a joke, it’s not even that funny,” let me say this: Lots of jokes aren’t funny. Most, probably, aren’t that funny. But there is a difference between unfunny humor and harmful humor, and the latter can be dangerous long term by normalizing negative behavior, stereotypes and oppression and trivializing the concerns of those who harmed by these actions.

During a comedy set in 2015, Amy Schumer, a white woman, said, “I used to date Hispanic guys, but now I prefer consensual.” Now, take a wild gander at who else has compared Hispanic men to rapists. Hint: He will be our president in January.

Rape jokes, as another example, can help normalize rape. Most turn the victim into a punchline, or to act of rape itself into comedic relief or shock humor. And we see the downplaying of sexualized acts all around us: Catcalling is just a compliment, a friend groping you at a party is just “kidding around,” inserting oneself in an unconscious victim’s mouth while someone takes Snapchats is just a prank. Small scale minimization contributes to widespread indifference.

On a personal level, I am being rushed towards decisions that I wanted to wait far more time before making, and I am by no means even close to highly at risk compared to a huge percentage of the LGBTQ+ community, particularly those who fall within multiple marginalized groups. Ready for some scary numbers? According to the Anti-Violence Project, transgender people of color are “six times more likely to experience police violence.” Twenty-six percent of trans people have been fired due to their gender identity, while 20 percent have been denied or even evicted due to their gender identity. And in 2016 alone, 21 trans people have already been murdered—a horrifying number that reminds us why the aforementioned Trans Day of Remembrance exists in the first place.

Now now, Colin Jost, settle down. No one’s saying you personally are responsible for murder. I note this because people, particularly white men, tend to conflate any form of criticism linked to social injustice to being called a violent transphobe/racist/misogynist/et cetera. In reality, you can be a perfectly fine human being with every intention of not hurting other people but, guess what? You still hurt someone, or a group of someones.

Using identities as a punchline does contribute to the thought that gender is a (mockable) choice. It insinuates that being recognized for the person you’ve known you are your entire life is just a special treatment—and SNL apparently deems this selfish and superfluous enough to contribute to Hillary Clinton’s loss.

Jost himself tweeted a link to Mark Lilla’s much-discussed NY Times piece on “The End of Identity Liberalism.” The piece attributes Trump’s win to, in part, Clinton calling out specific marginalized communities during her campaign stops. It features gems like this:

“However interesting it may be to read, say, about the fate of transgender people in Egypt, it contributes nothing to educating Americans about the powerful political and religious currents that will determine Egypt’s future, and indirectly, our own.”

Ah yes, the fascinating fate of transgender people. Lilla’s use of the word “fate” here is an especially pertinent one, considering the arguments against Jost’s joke.

There’s nothing wrong with critiquing Hillary Clinton—all politicians should be openly criticized and told to do better—but to place the blame on intersectionality is absurd. There have been very few years indeed that people of color have had their voices acknowledged by mainstream politics, and yet writers still critique Black Lives Matter protests who challenge their politicians to better serve those affected by institutionalized racism. Meanwhile, on TV, comedians like Jost mock trans people who simply want to identify their gender openly.

it's so awkward watching cis dudes double-down on being an asshole. we're out here dying and you can't bite your tongue? https://t.co/RRbKNwncsO

You should not tell marginalized groups to calm down, or wait until the next election for people to care about issues that affect their lives every day. There are literally millions of LGBTQ+ people in the United States; our issues are not “fringe issues.” It’s fairly obvious that Trump’s presidency may result in devastating circumstances for trans and GNC folks, so now isn’t the time to throw those injustices by the wayside in favor of a more one-size-fits-all liberalism. Human rights don’t just trickle down; historically, people have had to advocate, insist and fight to obtain them.

Sure, Saturday Night Live is simply a television program, and Colin Jost is simply an improv actor. But does that mean they should imply to their millions of viewers that the only route away from Trump is is to marginalize these groups even further? Unfortunately, if this is the type of humor it’ll have on display for the next four years, it’s not even worth the rare David S. Pumpkins moment. 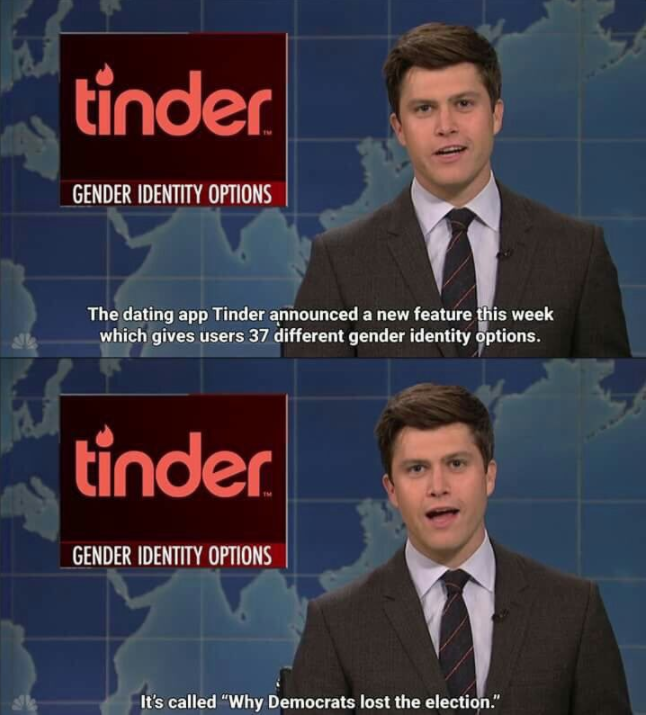