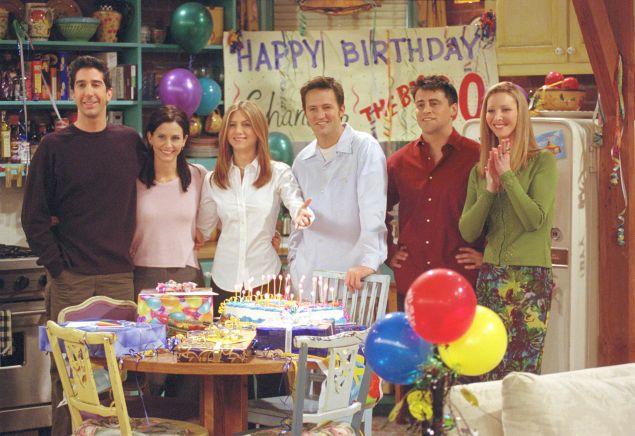 Change that sign to 40, and you’ve got the fastest growing set of roommate seekers. Warner Bros. Television

Roommates are often considered a rite of passage. They’re frequently required in college, and particularly necessary in places like New York, where the cost of living seems to skyrocket with every waking moment. In Manhattan, that experience usually includes a minuscule apartment in a run-down walk-up, where one shares a single bathroom with three other people.

Indeed, as wonderful as the huge West Village loft Rachel and Monica share in Friends looked, it didn’t exactly provide a realistic look at our future roommate-encumbered dwellings. Even Joey and Chandler’s much-smaller bachelor pad across the hall seems like a palace compared to present-day New York real estate, where having a roommate is something that you will hopefully grow out of.

However, according to a survey conducted by roommate matching app SpareRoom, your dreams of one day living alone are not realistic. At least not in New York. The survey the company used is based on data compiled from August to November 2016, and it showed that Generation X is the fastest growing group of roommate-seekers in New York. Now, 14 percent of roommates in New York are over the age of 40.

“Generation X is now our fastest growing group of users. They fall into two key groups—lifetime renters who’ve never made it onto the property ladder and those coming out of long-term relationships and realizing they can’t afford to live on their own,” SpareRoom CEO and founder Rupert Hunt said in a press release.

As if being single in New York isn’t hard enough, apparently, the end of a relationship is one of the driving factors in the 40-something’s need for a roommate. This is understandable, especially as we realize once again that Sex and the City lied to us and a single writer in the city producing one column a week cannot easily afford a sprawling Upper East Side apartment with a walk-through closet. Nope, in the real world those Gen X-ers who have just ended a long-term relationship must face the oft-intimidating world of apartment sharing, as 11 percent of this group is opting for a roommate due to a break-up, while 20 percent are divorced or widowed. That is, unless you find a Mr. Big who offers a large check, or a Charlotte who kindly gives up her Tiffany & Co. engagement ring for a down payment.

Moving on from the many lies that Carrie Bradshaw spewed, SpareRoom’s survey also shows that for some reason, a rather significant portion of the over-40 set is actually choosing to share an apartment for reasons other than financial difficulties, as 51 percent of current Generation X shares are opting for a roommate, even if they could technically afford to rent on their own.

A roommate does have its benefits, of course—other than splitting the rent, there’s also the fact that one has a live-in companion to hang out with all the time, as Friends kindly showed us…if that’s your kind of thing and you enjoy having someone around at all hours.

Just ask Hunt, who is currently looking for roommates to share his own $8 million loft, for $1 per month in rent. Predictably, there has been a rather excited response, with nearly 9,000 applications thus far.

“It’s not a financial decision for me…It’s about having people around,” Hunt said. “I truly believe that living with the right people beats living on your own. When I separated from my wife a few years ago I lived on my own for a while and hated it. If I’d had a bad day there was nobody to lift my spirits.” For $1 a month in rent, we’re sure he’ll find people more than willing to listen.