Imagine if, when aliens make first contact with humans, not only do they not speak English, but they don’t even use spoken words.

That dilemma is at the heart of the new film Arrival, starring Amy Adams, Jeremy Renner and Forest Whitaker. Adams plays Dr. Louise Banks, a linguist recruited by the U.S. Army to translate alien communications and discern the creatures’ purpose on Earth.

The problem (and the reason why the Army’s own cryptographers are stumped) is that these communications are not verbal—the creatures (called “heptopods” because they have seven legs) “write” out their messages using smoky symbols that resemble Rorschach inkblots.

The best extraterrestrial science fiction makes alien life as plausible as possible. To that end, the filmmakers recruited artists and linguistic consultants to give the tale a realistic basis.

Ink painter Martine Bertrand designed the written language shown in the film. She told the Observer that she emphasized mystery in her creations.

“We don’t know what’s happening or what they want,” she said. “I made the models fluid so they didn’t look human. There was both opacity and transparency.”

Bertrand said these “weird” designs should keep the audience on their toes.

“When you see the symbols the first time, you should be fearful but attracted,” she said. “You feel everything together, and want to be with (the aliens).”

Adams’ character Dr. Banks, who specializes in translating languages like Farsi, likewise begins Arrival feeling a mix of emotions. But once she’s immersed herself in the alien language, her mission consumes her.

To get a better idea of how linguists do their work, the production team turned to Jessica Coon, an associate professor of linguistics at McGill University in Montreal (where the movie was filmed). Coon does linguistic fieldwork on understudied languages, including the Mayan languages Ch’ol and Chuj, along with Mi’gmaq, a Canadian Aboriginal language.

“These languages are mutually unintelligible,” Coon told the Observer. “But I try to figure out what they have in common.”

In the film, Banks similarly attempts to decipher what the human and alien languages have in common. She starts small, teaching the aliens the basics of the English language by writing the word “human” on a dry erase board and holding it in front of her chest. One of Banks’ colleagues questions why she approaches language “like a mathematician,” but according to Coon most linguists use the exact same method.

“We’re not glorified translators,” she said. “The goal is to understand the structure and patterns underlying language. That’s the structure that lets human kids learn languages quickly and effortlessly.”

Banks’ Army superiors don’t initally realize how complicated her job is, but she illustrates this by writing the question “What is your purpose on Earth” on a whiteboard and then pointing out that the aliens don’t know what a question is, don’t know that “you” can mean more than one person (i.e. “all you aliens”) and have no concept of “purpose.”

“There’s a lot going on there,” Coon agreed. “When you start working on a new language, you can’t jump straight to big, complicated questions. You have to understand the small pieces first.”

One of Banks’ central beliefs, which informs her work throughout the film, is that “language is the foundation of civilization.” Coon concluded that “there’s something very right about” that sentiment, though she acknowledged that the film takes it to extremes.

“Some species have basic communication systems, but the complexity of human language sets our species apart,” she said. “Language is central to everything we do. But I’ve never had to tackle head on the question of how we’d respond to another species, so I don’t envy Amy Adams’ task.” 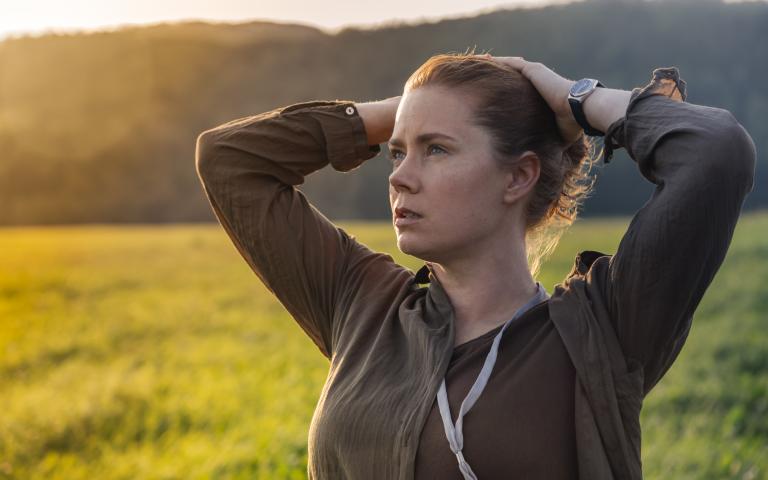