Mayor Bill de Blasio met privately with President-elect Donald Trump—a man he once labeled a racist—and reported to the press afterward that he had articulated what he believed were New Yorkers’ “fears” about the incendiary developer’s proposals on immigration and policing.

Addressing reporters outside the incoming commander-in-chief‘s eponymous tower following an hour-long conference, the liberal Democratic mayor said he sought to articulate the concerns of minorities, and of the undocumented immigrants and Muslims Trump railed against on the campaign trail. De Blasio, who backed Hillary Clinton’s candidacy, refused to describe how Trump responded beyond saying “there was a give-and-take.”

“I think the right way to start a relationship is to put the cards on the table. And all of these concerns are being felt by New Yorkers very deeply right now. I tried to express to him how much fear there is, how much fear there is communities all over this city, a whole range of people through this city and this country who are fearful about this current dynamic,” de Blasio said. “The purpose of the meeting was for me to assert to him the concerns and the needs of all New Yorkers. My job as mayor is to be their voice, and to give him perspective on what New Yorkers are feeling right now, what their concerns are, what their fears are.”

The mayor said he repeated his promise the NYPD “would not go back to” its old aggressive stop-and-frisk tactics that Trump pledged to promote nationwide. And he recounted calling the Queens-born businessman’s attention to the 900 Muslims who serve on the city’s police force, and how the president-elect’s proposal to obstruct immigration from Middle Eastern nations would destroy connections crucial to preventing future terrorist attacks.

The same, he argued, went for the Republican’s plans to deport upwards of three million undocumented immigrants—a plan de Blasio said would discourage the crime victims lacking legal status from approaching police, and would thus allow perpetrators to run free.

“I gave him the perspective of the NYPD, that any initiative that would create a rift between our police all over the country and the communities they serve that would make it impossible for police and community to communicate, that would sow distrust between law enforcement and neighborhoods, would be counterproductive,” the mayor said.

De Blasio declined to give an update on his longstanding suggestion that the city might wipe the records of its municipal identification program. His administration instituted IDNYC in part to allow the undocumented to obtain a government-issued proof of identity for tasks like opening bank accounts.

The mayor did say he informed Trump of his intention to keep New York a “sanctuary city” for immigrants whose only crime is entering the country illegally.

“I reiterated to him that this city and so many cities all over the country will do all we can to protect our residents and make sure families are not torn apart,” de Blasio said, arguing against what he saw as the inhumanity of mass deportations. “That proposal countered and flew in the face of all that was great about New York City, the ultimate city of immigrants—a place that has succeeded because it was open to everyone, a place built by generation after generation of immigrants.”

In particular, the mayor recalled calling on the president-elect to recant his most inflammatory rhetoric, and asserting that Trump’s selection of Breitbart News head Stephen Bannon as his chief counselor and strategist had only exacerbated anxieties.

“We need to see things that give people more assurance that all New Yorkers and all Americans will be respected,” he said. “I thought many people were afraid because of things they had seen in Breitbart News, and it was clear they had suggested divisive policies.”

The mayor did say that he and the belligerent billionaire had “left the door open” to cooperation on infrastructure investment and opposition to free trade deals.

“He is a New Yorker, and I think he loves this city,” de Blasio said. 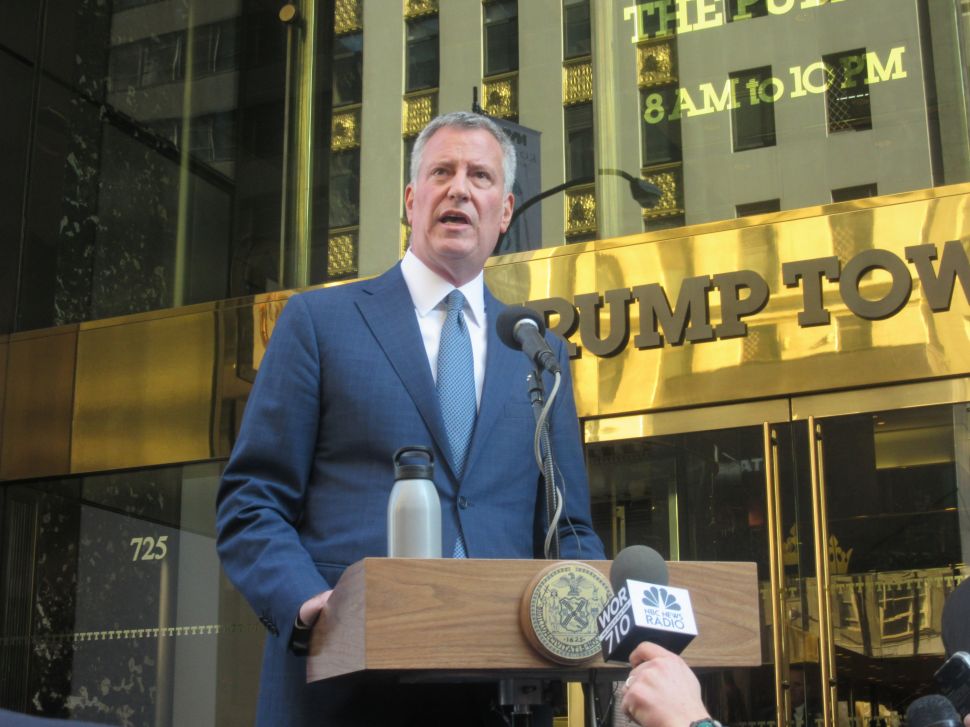