With the latest homegrown terror attack—people on a sidewalk at Ohio State rammed with a car and stabbed by the driver—Americans are once again asking if the attacks are connected to ISIS or al-Qaeda.

At this point in the jihad evolution, the answer is likely “both.”

Reports indicate Abdul Razak Ali Artan, an Ohio State student whose family left Somalia when he was a child, cited late al-Qaeda recruiter Anwar al-Awlaki on his Facebook page. The New Mexico-born cleric has done a lot of recruiting since being killed by a U.S. drone strike five years ago.

In Virginia recently, former National Guardsman Mohamed Bailor Jalloh, inspired by al-Awlaki as well as terrorist attacks in Chattanooga and Fort Hood, pleaded guilty to giving material support to ISIS. He had met ISIS members on a trip to Nigeria, bought his gun and was ready to go, according to court documents.

So is the jihadist who gets training, guidance and inspiration from more than one terror group resourceful, or just confused? The jihadist who lauds bin Laden and al-Baghdadi in the same breath is just taking advantage of the universal jihad, by which terror outlets that nominally compete serve up a buffet of advice and instruction for the taking of any jihadist ready to go.

Links can’t be dismissed as investigators naturally need to know if someone was receiving material assistance from a foreign terrorist organization or if there’s an interconnected cell at work on American soil. But there’s also a rush from media and the public to categorize attacks with checkboxes. Perhaps a scorecard, the reasoning might go, will help better direct legislation, politicians’ promises or even citizens’ fears. Perhaps attributing blame to a single organization gives us a sense of control in the midst of random attacks, expanding soft targets and pressure-cooker bombs left on an otherwise unremarkable city block.

Lone jihadists have shown us, though, that they’re picking and choosing what works regardless of the terror organization behind it: a sermon from al-Awlaki, an advice article on knife attacks from ISIS, an IED recipe from al-Qaeda in the Arabian Peninsula. The bloodied journal recovered from New York and New Jersey bombing suspect Ahmad Rahami said he derived “guidance” from Awlaki and late ISIS spokesman Abu Mohammad al-Adnani, referred to Osama bin Laden as a “brother” and name-dropped Fort Hood shooter Nidal Hasan.

It’s ideological crowdfunding, a melting pot of tactics and terror leaders that mean little as far as black-and-white lines of inspiration and allegiance when it comes to the lone jihadist. Pledges of allegiances pick up media coverage, but even opposing terror groups praise the operations and analyze them for use by future jihadists.

In the transcripts of Orlando nightclub shooter Omar Mateen’s calls with a police negotiator, he claims to be a solider of the Islamic State and also refers to Boston Marathon bomber Tamerlan Tsarnaev, who was linked to Dagestan Islamists and used an al-Qaeda bomb recipe, as his “homeboy.” Mateen claimed his attack was revenge for the assassination of ISIS’ Anbar province military emir Abu Wahid.

In al-Qaeda’s review of Mateen’s “heroic fierce” attack, they’re less concerned with any pledge of allegiance to the Baghdadi Bunch and more concerned with the result—and ensuring that others emulate it. “We stand by and support all Muslims who attack America in their homeland regardless of their affiliation to any group or loyalty,” al-Qaeda said. “Lone jihad is not monopolized by al-Qaeda or any other group, therefore we call upon all active jihadi groups to adopt and build upon the idea of lone jihad and call towards it.”

So why does a lone jihadist claim ISIS even if he’s never communicated with an ISIS operative, even if he pays tribute to al-Qaeda or uses their DIY instructions? It’s like broadcasting your actions on CNN vs. C-SPAN, for one. Both terror groups have well-established media operations, but everybody’s glued to ISIS’ media channels after an attack to find some claim of responsibility. ISIS is the threat du jour, the group that puts out videos gorier than “Saw” sequels, the only terror organization being talked about by politicians.

But as the headline on ISIS’ Dabiq magazine issued after the Paris attacks blared, it’s “Just Terror.” Despite the barn-burning goals of the Islamic State or the slow-and-steady strategy of al-Qaeda, the lone jihadist sees it more as a collective effort. And terror groups, pushing the sermons and practical instructions that make up the full body of coursework for the universal jihad, are just fine with that.

Bridget Johnson is a senior fellow with the news and public policy group Haym Salomon Center. A veteran journalist, Johnson is a contributor at NPR and serves as D.C. bureau chief for PJ Media. 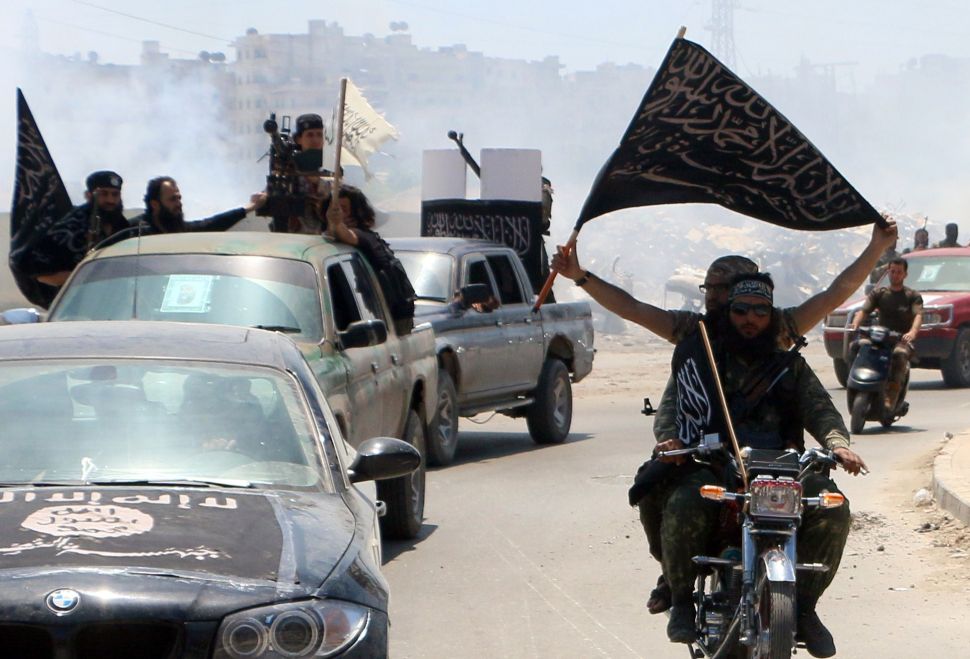