If you’re going to offer epidemic level viruses for sale on the black market, the least you can do is store them safely in airtight test tubes. That’s exactly what Song Hia and Yifan Hu did at this weekend’s black market in Queens, at Internet Yami-Ichi in New York 2. The pair offered viruses for sale inside test tubes. Of course, they were computer viruses stored on SD cards, not people viruses. But these things are scary. Even the least impactful of the digital diseases they had on offer—SQL Slammer—had done $1.2 billion worth of damage to the world economy before it was contained.

Does it sound like a weird project? That’s exactly the kind of strangeness visitors should expect when they visit an instance of Internet Yami-Ichi, “Internet Black Market.” This weekend marked the second time New York City imported the Japanese happening (we were there last year, too). It was a room full of tech art and tech provocations, weird stuff for sale or barter meant to make you think about what the web does to us.

Including the viruses, we found nine projects that really grabbed us at the event. For anyone that loves the weirdness of the internet, many of these projects have manifestations online, as well.

Jason Eppink and Larissa Hayden know what you really want out of your meals in New York City: likes on Instragram. So they offered the #InstagramCafe. They gathered up New York’s favorite foods to post on social media, such as avocado toast, pizza, milkshakes and cronuts. “This is something I’ve a lot of experience with,” Hayden told us. They also had a selection of backgrounds available, so you could post your meal just perfectly. They did not have any food available for people to eat, but who wants to do that? Consuming what’s best served as content is so 2009.

Melanie Hoff created the Small Data Squad with Dan Taeyoung. This may have been one of the most provocative yet whimsical demonstrations at the event. The team scoured the internet for personal facts about every vendor at Internet Yami-Ichi and then printed what they learned onto microscope slides. Everyone was free to read them, but they could only do so one at at time, with the team’s microscope. So it preserved their fellow vendors’ privacy, kind of.

In deck of tarot, 22 of the cards are what’s known as the “major arcana,” these are the famous cards like “The Fool” and the “Hanged Man.” Taking inspiration from that part of the Tarot, Paula Ceballos and Dana Abrassart created /r/YourFuture, a deck of cards with a set of 22 new major arcana, based on major subreddits.

My fortune can be seen above. Ceballos told me that I’ve always been known to do my own thing, and that’s meant I have dabbled in all kinds of activities. That said, the Reddit Tarot told her that these days I’ve started to become a little more focused. She advised (or /r/YourFuture did) that I continue to let myself wander into unexpected places even as I follow a somewhat more defined road.

Just as you need a spirit guide to unpack the insights of the Reddit Tarot, Ceballos told us that the website itself is much the same. A new redditor starting at the front page will be overwhelmed. Ceballos told the Observer, “In order to really get into Reddit, you need to have someone who really knows Reddit in order to take you through it.” (We’ve warned off some of the worst spots)

I feel a little weird about the Password Confession Booth. Visitors were encouraged to go inside and confess the bad password they have used over and over again to a robot priest. The priest would repeat your bad password back to you and then ask for money. This reporter has a password that he has used much too much. I confessed it to the robot priest, but hopefully I’ve already expunged it from every site that matters. Visitors who felt cleansed after the experience might have found redemption from their sins when they happened upon the Freedom Of The Press Foundation‘s table, which provided password improvement consulting services (they had a very similar strategy on hand to one we recently reported on).

Eli Yeung‘s internet time capsule completely stressed me out. For only a dollar, she let visitors record a message to their future selves on an analog audio tape. She will make two copies of the tape. One she will drop in the ocean, because “the internet lives in the ocean,” as she told us. The second she will store on her website for 10 years, then send all the recordings to each participant. “If I die, I have other friends who I will share the password and instructions with,” Yeung told us.

This reporter babbled incoherently into her mic, so that in the future I can remember how Yami-Ichi flustered a brain trained on Web 1.0.

When I walked into the back room that hid digital alchemist Fuzzy Wobble‘s GIF Dance Party, its instigators happily invited me to humiliate myself. GIF Dance Party took three-second moving GIFs of visitors and shared them onto a giant projection screen that everyone who entered the room could see. Most people chose to enact some kind of dance move. Your correspondent took a different approach, instead reenacting one of those moments where I was hit with a memory of a past humiliation. So I humiliated myself about humiliating myself. It was very meta, very Yami-Ichi.

Fuzzy Wobble has made an online version of the tool, and a person could waste a lot of time making fresh new GIF dance parties when they really should be working.

Melanie Hoff shows up twice in this list. She had a second project on display, “Yami-Ichi Bank.” Much like the woman in the background of this photo, this reporter nearly didn’t notice the project, because it looked like an ATM you might see in such a corner in such a space. Instead, visitors could actually play the game “Snake” (here’s a free online version) using the machine’s key pad.

“The idea comes from thinking about tech designed for a very specific purpose, but that works equally well for another purpose,” she told the Observer. She intentionally put it out of the way. She wanted people to discover it, rather than to put it right in front of them. She could have used any number of simple games for her “bank,” but the one she chose fit it best. “I like it as a metaphor for capitalism,” she said. It works, because the point of Snake is to consume as much as you can, but the more you consume the harder it is to survive.

Dimitry Tetin showed one of the quietest and most zen of any of the creations at the event. For “Water Carries Things To Shore And Brings Them Out To Sea,” Tetin sold small bottles of he collected from the East River. Each one came with a little booklet that had a website and password that unlocks a unique 15 second video of the surface of our city’s most well-known river-that’s-really-a-tidal-estuary. 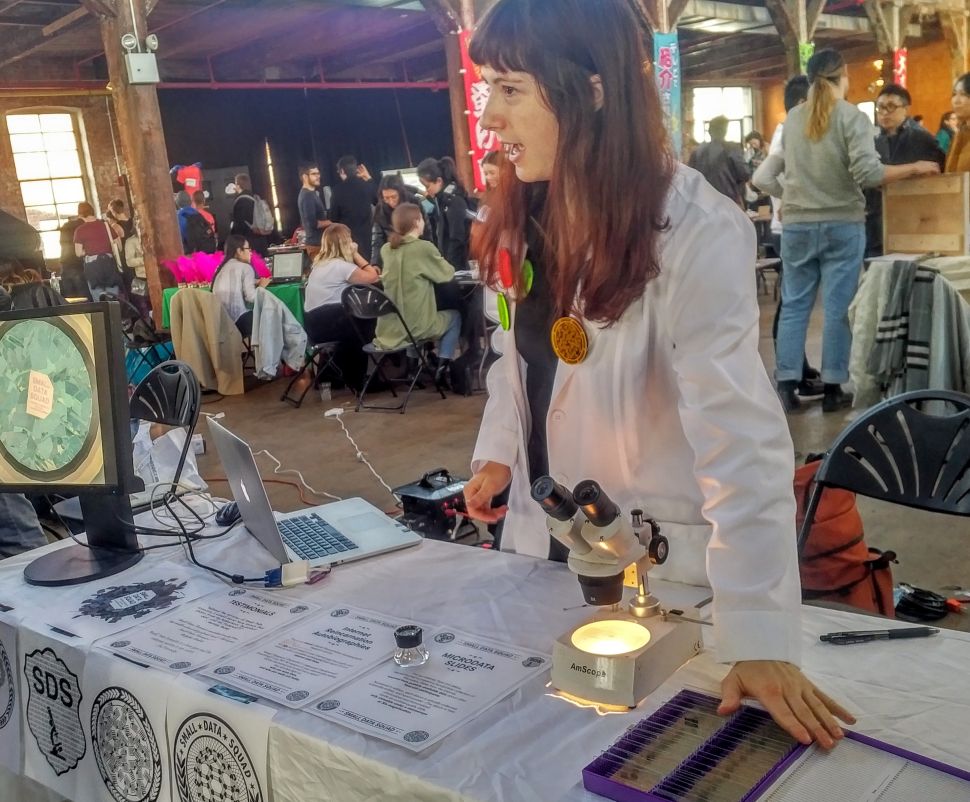