This morning, as he appeared before the House Intelligence Committee, James Clapper, our Director of National Intelligence, announced his resignation, effective January 20, 2017—the day Donald Trump will be inaugurated as America’s 45th president.

Submitting his resignation “felt pretty good,” Clapper told committee members, adding, “I have 64 days left and I’d have a pretty hard time with my wife going past that.” In fact, his resignation had been anticipated for months and was no surprise to the committee, since Clapper has been the DNI for more than six years, and President Trump will want his own person in that important job.

The DNI position was created in April 2005, in the aftermath of the 9/11 attacks, as part of a Congressionally-mandated effort to improve high-end command, control, and coordination across the behemoth Intelligence Community. Clapper, who assumed the job in August 2010, served longer as DNI than his three predecessors combined. He is generally assessed as the best DNI to date, allowing that there’s not much competition there.

It’s a tough job, since the Intelligence Community is a diverse mix of top secret bureaucracies which don’t always play well together. The IC is made up of 16 different spy agencies—17 if you count the amply-sized Office of the DNI, which is a Beltway player in its own right—and there’s a reason American intelligence professionals love jokes about cat-herding. None can deny that, particularly under Clapper, the DNI grew more effective at getting our spy agencies to play well together, and information sharing across the IC has unquestionably improved over the last decade.

Some of his success as America’s top spymaster can be attributed to Jim Clapper being a career intelligence officer who knows the business from the ground up. Commissioned in the Air Force in 1963, Clapper served in Vietnam, including 73 combat support missions, collecting airborne signals intelligence, and he was appointed director of the Defense Intelligence Agency in 1991. He retired from active duty in 1995 as a three-star general, worked in the private sector for six years, then was appointed the civilian director of the National Geospatial-Intelligence Agency in 2001.

Clapper’s tenure at NGA, which lasted until 2006, was considered a success, as that agency became vital to our Global War on Terrorism, tracking jihadists across the globe with cutting-edge geospatial intelligence, so his appointment as DNI by President Obama was not exactly a surprise. Clapper, now 75 years old, has been in the intelligence business for more than a half-century, so he’s understandably ready to retire.

It’s not that Clapper’s tenure as DNI has been an unblemished success. Nobody in the IC has been happy with all of his decisions, and the dreaded “stovepipes” between our spy agencies—professionals term them “cylinders of excellence”—have been reduced but by no means done away with. Plus, the downside to greater information sharing across the IC, replacing the venerable “need to know” principle with the more friendly-sounding “need to share,” has meant that stealing America’s secrets has never been easier.

Which brings us to the Edward Snowden debacle, which will tar Clapper’s reputation, fairly or not. Most of the blame for the Snowden disaster falls on the National Security Agency, which we’ve learned recently has still not reformed its seriously broken security and counterintelligence procedures more than three years after Snowden absconded with 1.5 million classified documents and fled to Moscow. Yet some of that fault lies with Clapper and his top management, too. Clearly the DNI should have done more to force much-needed security reforms on NSA and the entire IC, particularly after Snowden went public in June 2013.

However, what made Clapper a major bugbear for anti-intelligence activists was his notorious testimony in March 2013 before the Senate Intelligence Committee, when he was asked by Sen. Ron Wyden whether NSA was collecting information on millions of average Americans. “No, sir,” Clapper replied, “Not wittingly. There are cases where they could inadvertently, perhaps, collect—but not wittingly.”

When, three months later, Snowden revealed to the world that NSA in fact was collecting metadata on millions of Americans, Clapper appeared to have lied point-blank. The reality, of course, was more complex, and the real issue was why Wyden chose to ask the DNI that loaded question in an open, unclassified forum—when as a member of the Senate Intelligence Committee, he knew the actual answer had to be classified and was something Clapper could never state in that venue. In other words, Wyden set up the nation’s spymaster in a nasty Beltway game that only hurt the Intelligence Community and our national security.

As Clapper subsequently explained, “What I said was the NSA does not voyeuristically pore through U.S. citizens’ emails. I stand by that…I thought though in retrospect I was asked [a] ‘when are you going to stop beating your wife’ kind of question, meaning not answerable necessarily, by a simple yes or no. So, I responded in what I thought was the most truthful, or least most untruthful manner, by saying, ‘No.’”

The Wyden incident was unfair, and in fact most Democrats on Capitol Hill have regarded Clapper as a competent and judicious man. Hence the accolades he’s getting today from both sides of the aisle. “James Clapper has always exhibited sober judgment and put the fate of the nation first. We are all certainly very grateful for his service,” tweeted Rep. Adam Schiff, the ranking minority member on the House Intelligence Committee.

The important issue now is: Who will replace Jim Clapper? Staffing the next DNI is an especially important matter for the new Trump administration, give how little experience the president-elect has in espionage and national security. Having been publicly dismissive of the Intelligence Community before his election, Donald Trump now needs to appoint a top spymaster who is up to the big job of cat-herding the nation’s intelligence agencies.

That means someone with experience in the top-secret world. Appointing an espionage neophyte as the DNI would be a disaster from the get-go. This isn’t the sort of position that’s amenable to on-the-job training. Many in the IC were hoping that Mike Rogers would be the new spy-boss, given his excellent reputation inside the Beltway. A former FBI agent, Rogers chaired the House Intelligence Committee for four years and is respected in intelligence circles. However, Rogers’ abrupt resignation from Team Trump earlier this week, apparently in a purge of friends of former New Jersey Gov. Chris Christie, makes his appointment as DNI unlikely.

The list of other possible candidates includes Rep. Devin Nunes, Rogers’ replacement as chair of the House Intelligence Committee—and he wouldn’t be a bad choice. The person the IC does not want as the new DNI is Mike Flynn, the controversial former head of the Defense Intelligence Agency who’s been Trump’s right-hand man on national security matters throughout his campaign.

Many in the IC object to Flynn’s close ties to Moscow, viewing them as reflecting poor judgement, at best, while he’s not held in high regard by other espionage higher-ups, who consider him abrasive and arrogant. His cashiering as the head of DIA by the Obama White House—over poor performance, despite Flynn’s claims that he was fired due to his warnings about the Islamic State—demonstrated that Flynn had been promoted above his level of competence. Making him the DNI would only bring more of the same, in the eyes of most IC machers.

Trump is going to have a bumpy relationship with America’s spies out of the starting gate, thanks to his bromance with Vladimir Putin and his negative comments about the IC, so it’s important that his spymaster is someone who’s trusted by America’s spies as well as by the president himself. It would be wise to name a new DNI soon, so that the transition is smooth and when Jim Clapper deservedly heads off into retirement in nine weeks, our Intelligence Community will keep running without interruption or bureaucratic drama. 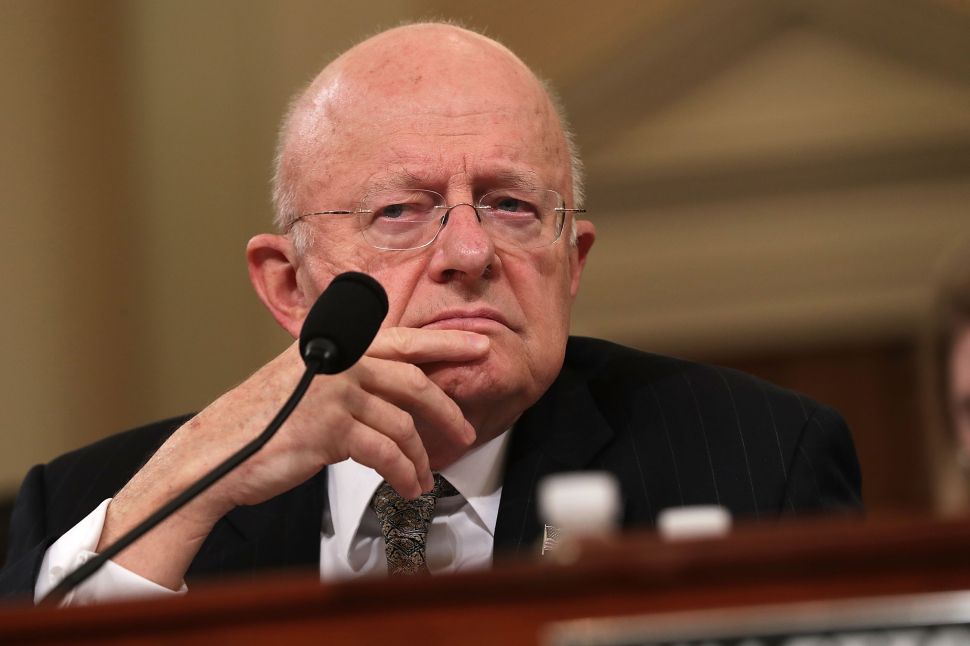