Let’s start here: It was a con.

(Note: As of this weekend, 5 million pounds is about $6.25 million U.S. dollars; I’ll bounce, somewhat confusingly, between dollars and pounds in this piece).

There are two giant giveaways that this was a fake: the sheer improbability of the numbers, and that fact that Panty-Boy refused to show anyone the memorabilia, or even provide a list—a manifest, as the movers might call it—of the contents of his bonfire.

I could detail how Corré’s math doesn’t even come close to working out, but it would get a bit boring, and no doubt would lead to an extended discussion of the original pressing of the Buzzcocks’ Spiral Scratch EP and the Rigid Digits release of “Suspect Device.” Whereas this would greatly amuse Jack Rabid and I, the rest of you are busy people who have Westworld to discuss.

But let’s say this: The highest priced punk-era memorabilia I’ve seen is an authentic Sid Vicious game-used bass, which someone was trying to hawk for about $35,000 (don’t know if they got it), and the A&M Records pressing of “God Save The Queen,” which has sold for $10,000. Now, you could put together all the Sid basses and A&M “God Save the Queen” 45s in the whole world, and you’d have trouble getting it to add up to $125,000. Perhaps Corré threw in some of the dresses and T-shirts Mummy designed, and maybe a couple of vintage posters, too; maybe, just maybe you could get the tally up to $500,000.

The only way you’re going to dig up $6,250,000 worth of punk memorabilia is if my friend Billy Idol prostitutes himself out to 1,250 eager chicks nostalgic for the 1980s at $5,000 a pop. This is not inconceivable—Billy’s heart is very much in the right place, and he might do it for the right cause—but it would be hard to burn this “object” in any real way. I guess you’d have to burn the cash Billy was paid, but I suspect this would cause some very undesirable tax issues for him.

Which is all to say that first and foremost, Corré was lying.

Does that make it any better that Corré was lying?

First, Corre’s bonfire of fakery presumed that making a “statement” by burning (allegedly) valuable memorabilia is somehow more worthwhile than using the proceeds of the memorabilia to fund good work.

That’s an ugly and ridiculous position. Whether it’s Planned Parenthood, supporting your local PBS station, or making a donation to help Zephyr Teachout become president one day, there are about 88 dozen causes that could make really good use of a fraction of $6.25 million. Burning anything of value—instead of translating it into money that can be used for good work—is obscene, and the fact that the Bra Pusher was lying about it doesn’t make it any better. That makes him a liar and an asshole. Don’t drop a glass at my party and tell me its Kristallnacht, Underwear Boy.

Also, Thong Man, if you want this kind of gesture to have any meaning, burn your own actually real money. See, “memorabilia” is just “theoretical” money—it hasn’t been converted into currency yet—so burning it is doesn’t have the same weight and power as burning “real” money (and it’s a good thing you didn’t actually convert that memorabilia into currency, since if you had, you probably wouldn’t have enough money to buy and burn a Subaru).

In 1995, when musicians/artists/agitators Bill Drummond and Jimmy Cauty publicly burned 1 million pounds, they were very deliberately burning real money they had earned (most of it, significantly, via the work they had done as the pop music group the KLF). Although I am quite sure there were better uses for that money, let’s acknowledge the fact that they were burning their own, real money; it wasn’t a few scraps from their famous Mummy and Daddy’s storage space. This made Drummond and Cauty’s action a much, much more compelling and powerful gesture.

And it was actually more than just a political gesture—it was also a fairly effective “art” statement on a number of levels: not only were they making an interesting comment about lucre earned from the music industry, but they were also saying, “Well, you’d pay 1 million pounds for a painting, here’s our 1 million pound painting, and we are choosing to burn it.”

(Note to self: “Burning Subarus” is a good song title.)

Next: Corré made all this noise about the bonfire being a protest against the commercialization of punk.

Each and every time any form of art goes from the mind and hands of its creator into the public sector, it risks some degree of commercialization. That’s the “cost” of putting your ideas out into the real world. The only way to avoid any potential for commercialization is to create something and then insure that it is completely and totally unavailable; however, this unavailability risks making the artwork even more valuable (this would be, essentially, N Senada’s “Theory of Obscurity”).

Any limitation on that process is ridiculous. Only a truly pretentious or already wealthy person would deliberately set a limit on the level of appreciation and compensation they get for their work; for instance, would someone say, “Oh, we’d like to make only this much money off of our masterpiece, but not that much?” I hate that kind of thinking. It’s so freaking exclusive, so upper class.

Also, Stocking Seller, in the last few years, the music industry economy has collapsed: artists are now receiving virtually nothing for their recorded labors. I guess this eliminates the idea of commercialization! Gee, that’s worked out just great. Oh, but you’ve been so busy trying to get people to buy your garters that you may not have noticed that development.

Because any work of art that exists outside of the imagination probably also exists in a form where it can be purchased, I think you need to concede that all music (from Cajun to Mongolian Throat Singing) not only could be “commercialized,” but already has been. It’s just a matter of degrees.

It’s like the old joke about the guy who offers a woman $1 million to sleep with him; she appears interested, and then the guy goes, “Well, would you sleep with me for 125 bucks?” So then she’s all outraged and says, “What kind of woman do you think I am?” The guy then says, “We have already determined what kind of woman you are, now we are just haggling about price.” The idea of being negative about the “commercialization” of Punk (or any type of music) is just like that: If MDC put out an album, they’re “risking” selling as much as Green Day. We are just haggling about price and demand.

Corré also justified his Punk bonfire con by making all this “Punk Is Dead” noise.

As long as there is some 17-year-old out there whose mind is blown when they hear “Know Your Product” by the Saints for the first time (or “Outside View” by Eater or “How Much Longer” by ATV or “Fragile” by Wire or “Where Eagles Dare” by the Misfits or “Flying Saucer Attack” by the Rezillos, and on and on an on), Punk can never be “dead.”

Does Punk move you? Does it inspire you to be yourself, or be a better version of yourself, or did it just make your day a little bit better?

Then Punk is not dead.

The idea that Punk (or any genre) “dies” is based on the idea that it belonged to one generation or one group of people. This sort of proprietary generational ownership is absolutely disgusting. Every single day, lives are changed by rock ’n’ roll records that are 40 years old, 20 years old, 48 years old, 18 years old. Some kid, today, is going to be as moved and inspired by “New Rose” or “If The Kids are United” as you and I were when we first heard those songs.

Saying “Punk Rock Is Dead” is like saying “Pet Sounds is dead,” or “Revolver is dead.” As long as any one person is alive who hears something for the first time and has their world turned upside down by it, that genre, that artist, that spirit never dies.

Of course, punk is full of charlatans and imitators and fakes and frauds. But frauds don’t dim or obscure genius; if anything, they make the bright lights of quality and originality shine even brighter.

Punk isn’t dead. Are you alive? Do you love Punk? Do you know someone, anyone who was made happy by the ecstatic sound of the music, or who was inspired by message of freedom found in the music? Then Punk isn’t dead.

There’s some teenager out there, maybe in Port Washington, New York, or Cary, N.C., or Swindon, England, or Kronberg, Germany, who today discovered Punk Rock, and today has had his or her life changed by Punk Rock. That person (or maybe they’re a 62-year-old woman), is more truly a punk rocker than Joe Corré ever will be.

I’ll add this: In his little bonfire, Corré burned some effigies. Were any of those effigies in the image of his father, Malcolm McLaren? Because Malcolm McLaren is a man who tried his very, very best to “sell out” Punk, to proclaim Punk dead, to commercialize Punk. Every single thing the Panty Peddler claims he wants to protest was epitomized by the work of his father.

Maybe next time, The Underwear Salesman can work that out with a psychiatrist, instead of bothering us with it. 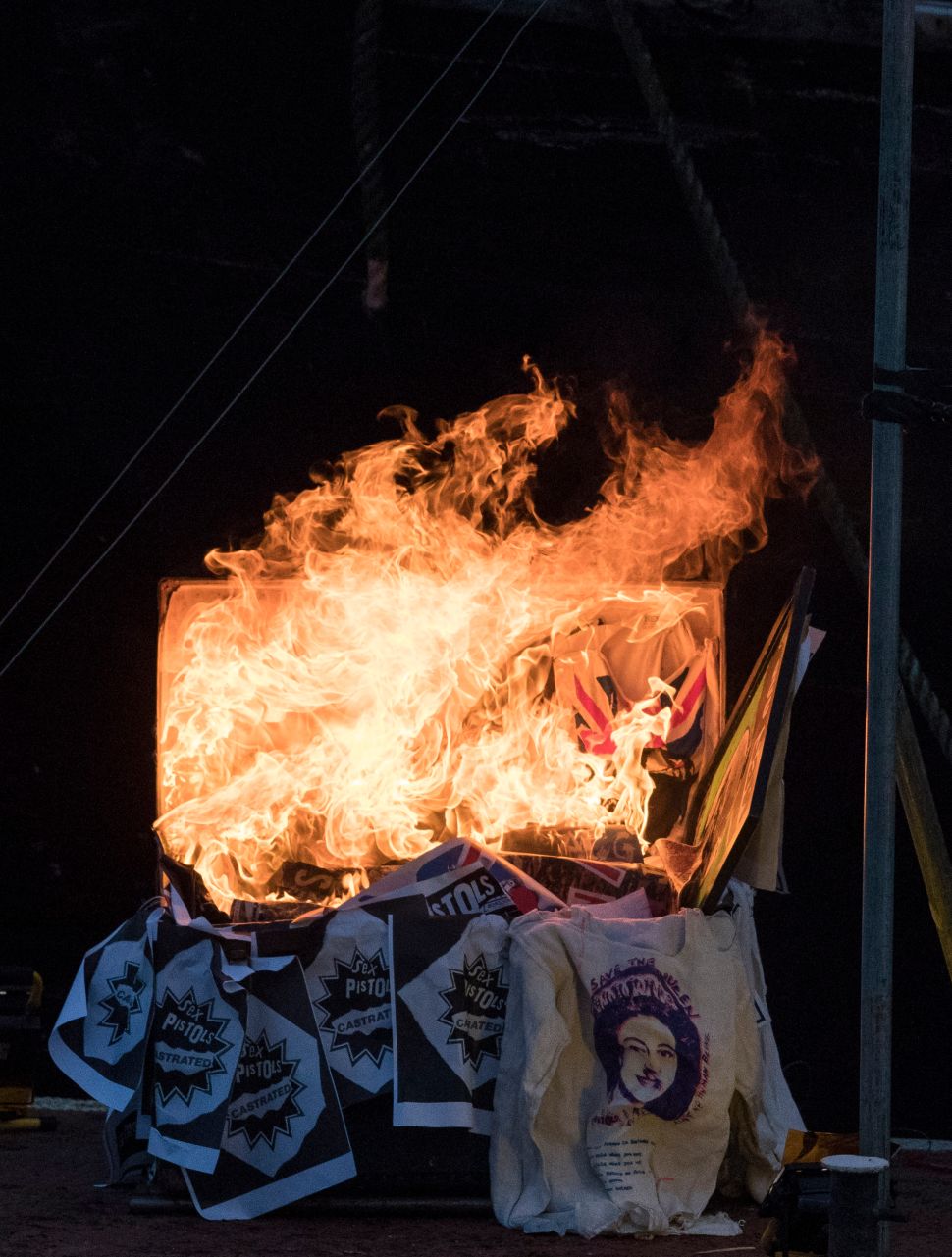