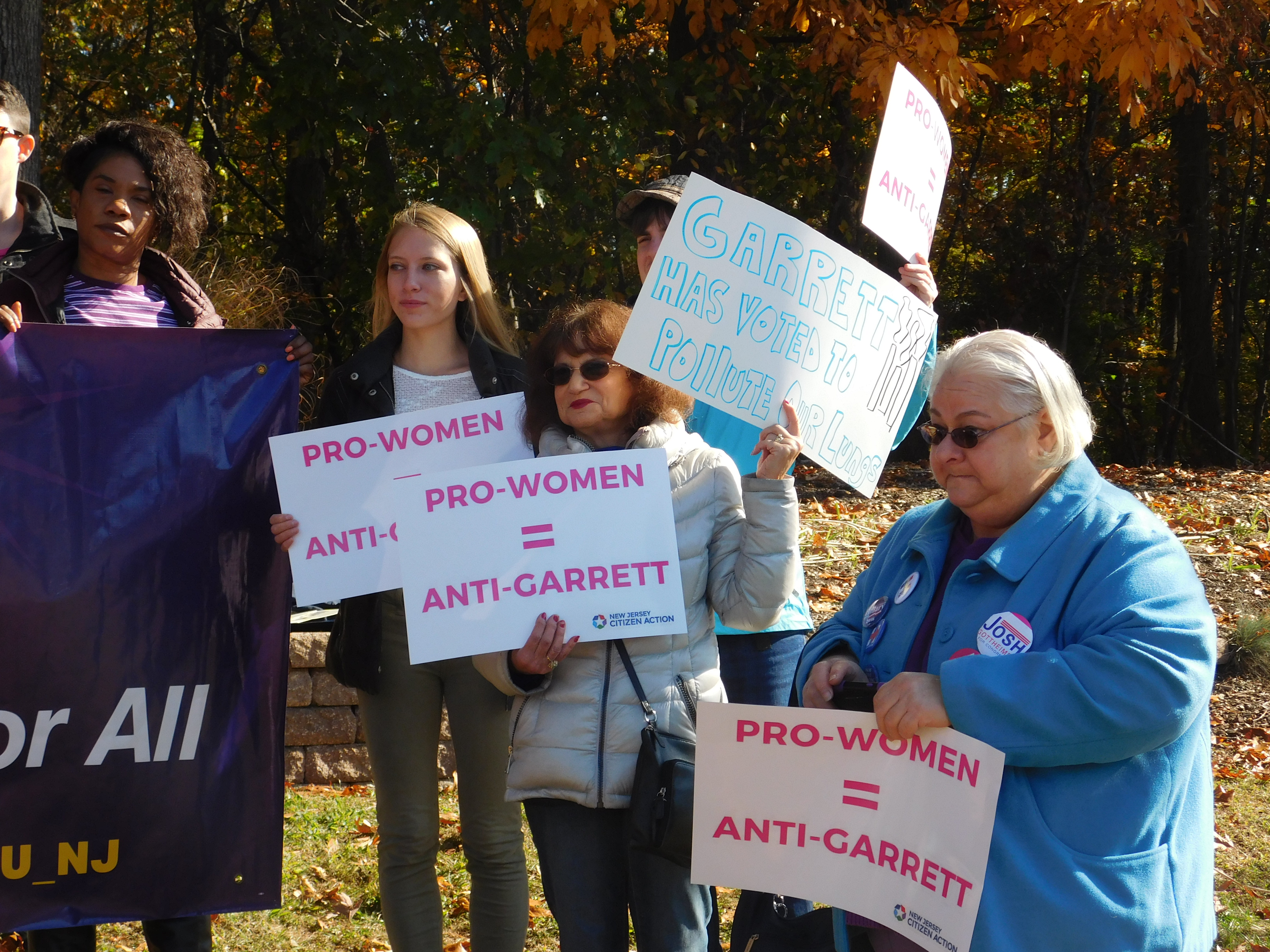 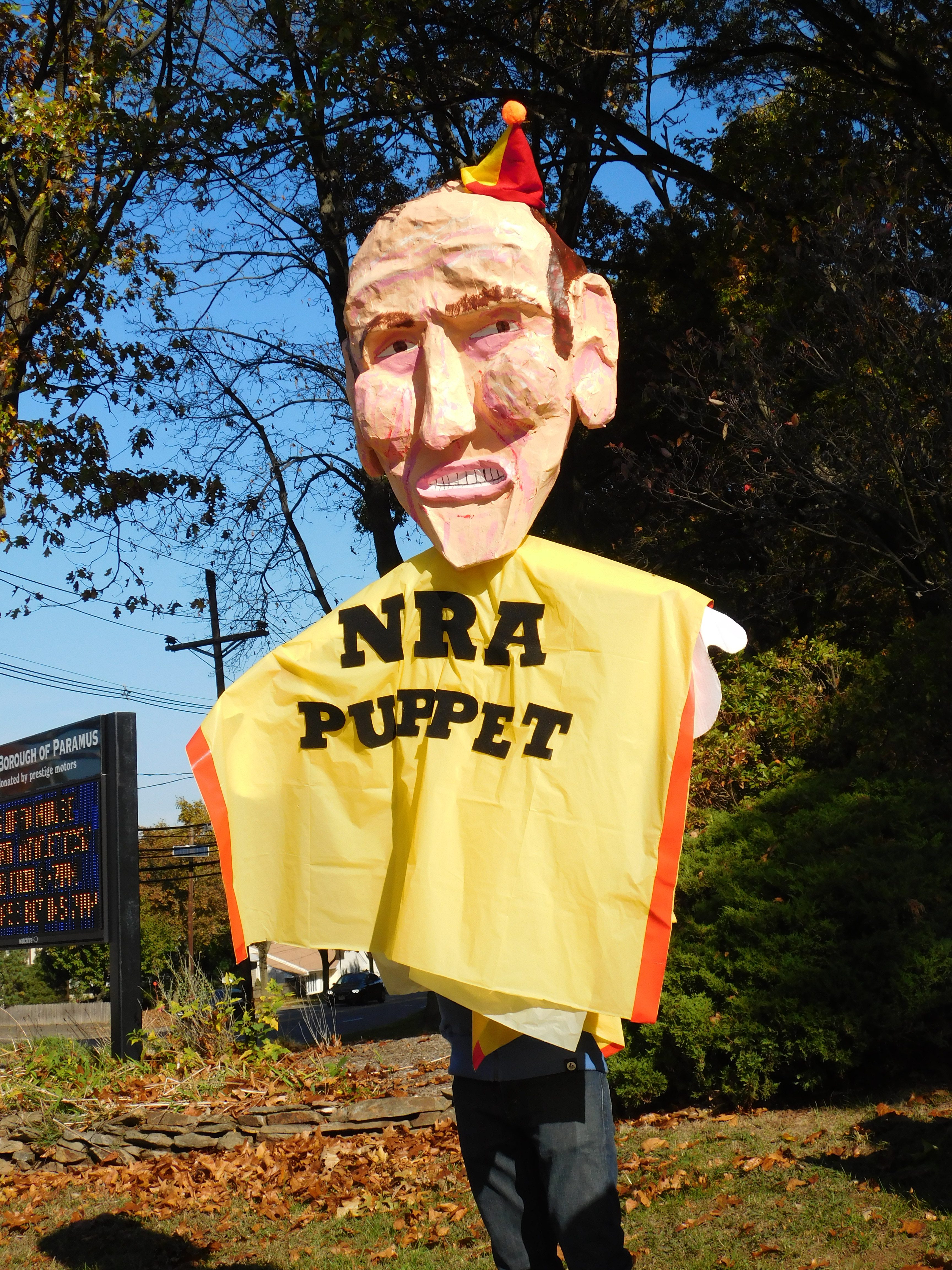 The 12 groups—many of which have women leaders, advocate for female members or push women-friendly initiatives—gathered at a busy Paramus, New Jersey intersection to share their message that “pro-woman equals anti-Garrett.” Participating organizations included NJ Citizen Action, Garden State Equality, the Sierra Club, Planned Parenthood, HPAE, NJEA and 1199SEIU, among others. Speakers accused Garrett of being “stuck in the past” on LBGT issues, an “NRA puppet” and claimed his policies are bad for the environment and therefore women and family health.

“We call on all the women of congressional district five to support Josh Gottheimer and push an end to Scott Garret’s 13 years of failed leadership for the women of New Jersey. We will not wait another day for equal pay, paid family leave, access to health care, voting rights, gun control, and so much more,” said Dena Mottola Jaborska, associate director of NJ Citizen Action. “Josh Gottheimer has publicly campaign on these issues and on other issues important to women.”

According to NJ Director of CWA, Hetty Rosenstein, women must band together to ensure a victory for both Gottheimer and presidential candidate former Secretary of State Hillary Clinton. She called Garrett and Republican nominee Donald Trump “two misogynistic peas in a pod.”

“We are going to save democracy in this country,” Rosenstein said as she invoked recent allegations made against Trump that he inappropriately touched women. “Donald Trump’s history of sexual abuse is horrifying and it shows the kind of person Scott Garrett truly is that he thinks that man should be president. Scott Garrett’s anti-woman voting record is disgusting, and on November 8 women are going to fight back and fire Scott Garrett.” 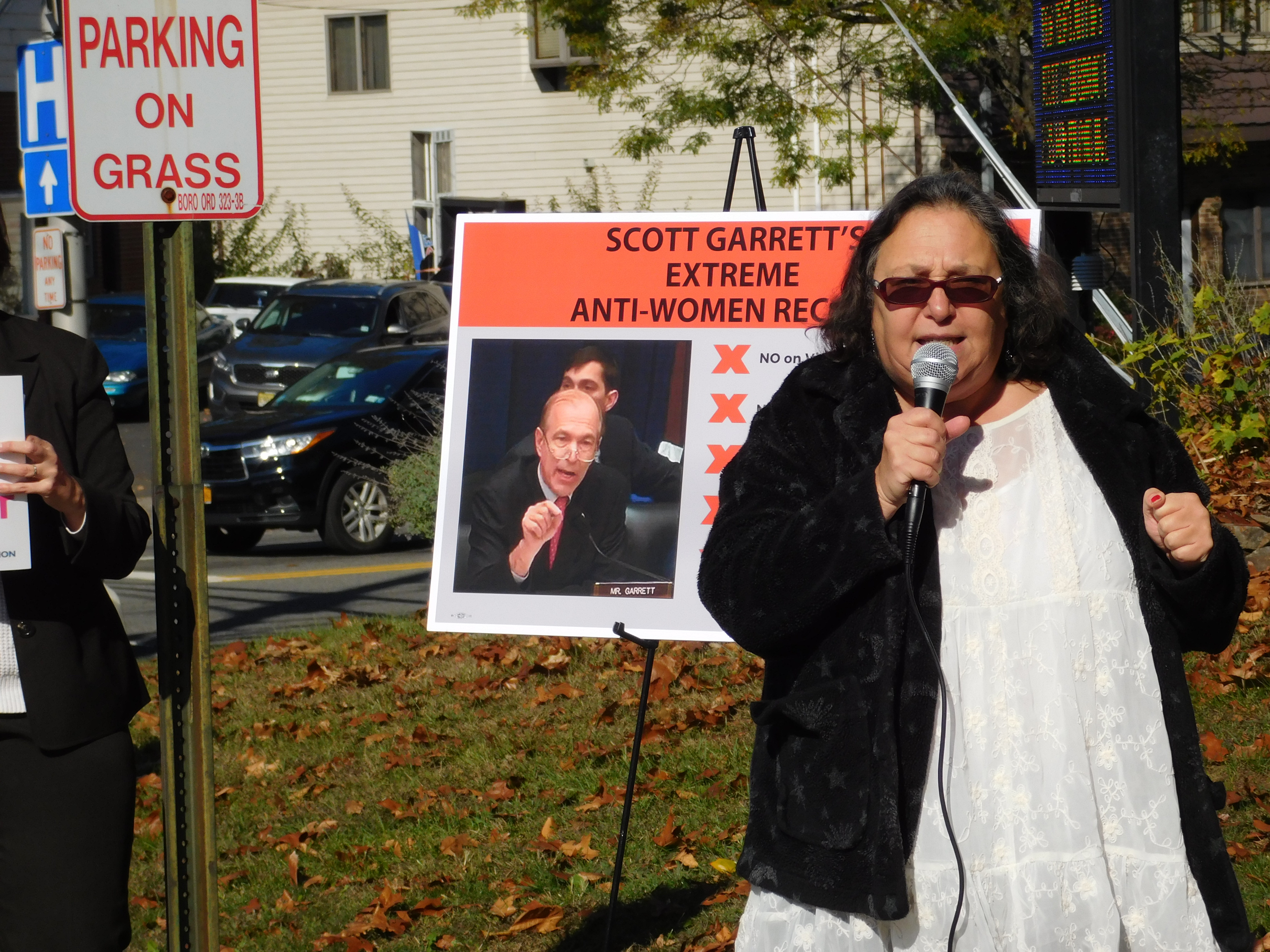 While Rosenstein discussed Garrett’s “anti-woman voting record” on matters like his vote against the Lilly Ledbetter act aimed at ensuring equal pay for equal work between men and women, his votes to defund Planned Parenthood, his pro-life stances, and a vote against the reauthorization of the Violence Against Women Act, among other topics, other speakers called Garrett out for other positions they say harm women. Those include gun control opposition and lack of action to curb the spread of Zika virus. 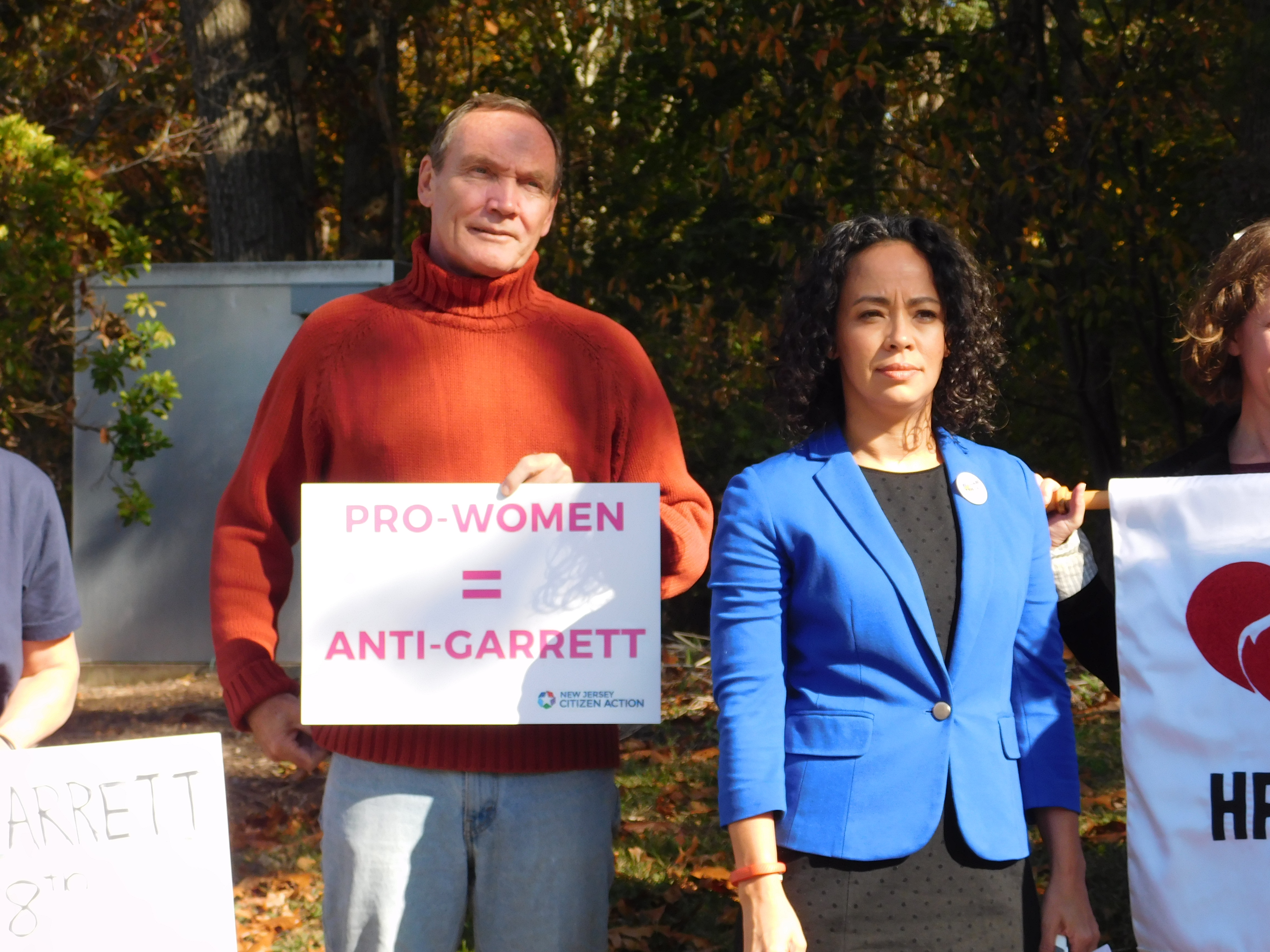 Milly Silva said that her group, 1199 SEIU Healthcare Workers East, is made up primarily by minority women.

“He has fought against social progress every step of the way,” Silva said. “Scott Garrett’s abysmal record is a stain on New Jersey and an affront to millions of women, immigrants, and workers in our state.”

Assemblyman Tim Eustace of New Jersey’s 38th legislative district was also present at the event. As a constituent of Garrett and one of the only openly-gay elected officials in the New Jersey legislature, Eustace has been a vocal critic of Garrett. Eustace has taken particular ire with Garrett’s alleged 2015 statement that he does not support gay candidates seeking elected office.

The assemblyman said that because Bergen has “70 percent” of the vote in CD5, it is possible a win can be forged for Democrats. He called on voters to make this year “Scott-free.”

The Tuesday event was not coordinated with Gottheimer’s campaign and the challenger was not present.

When contacted for a comment, Garrett campaign manager Sarah Neibart issued the following statement:  “Josh Gottheimer may not have been there in person, but his talking points clearly made an appearance.”

Garrett and Gottheimer will face off on November 8. 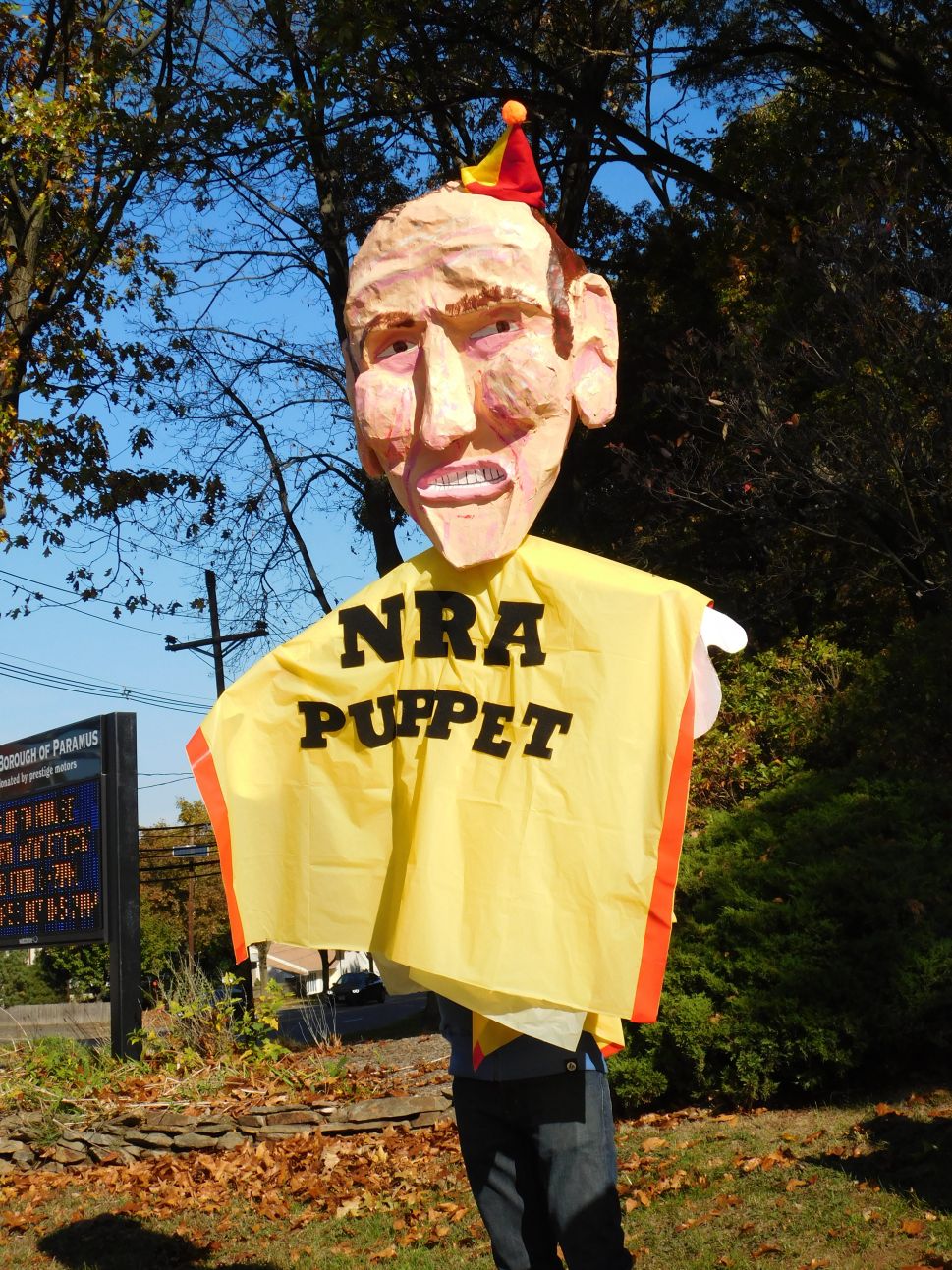