For years, ever since I left the Intelligence Community, I’ve tried to raise awareness about the rising threatto the United States and our allies of foreign espionage. My background in counterintelligence for the National Security Agency made me a rare public voice of experience discussing the spy threat to our country, its security and its prosperity.

When the Edward Snowden story broke in June 2013, I was one of the first to state publicly that this sensational saga was, in reality, a stage-managed Russian intelligence operation designed to harm the West and its powerful intelligence alliance. That fateful summer I also pointed out that there were apparent links between Wikileaks and the Kremlin. These positions won me no friends among the great and the good, and many were the mainstream journalists and pundits who castigated my reality-based assessments as “paranoid” and “McCarthyite.”

I was right and my critics were wrong. Snowden has been working for the Russians for years, as both Washington and Moscow have now admitted. As for Wikileaks, its strong links to the Kremlin’s intelligence services are now so obvious—I issued more warnings about that only a few months ago, long before our November 8 election—that Moscow isn’t bothering to hide them any longer.

As I’ve explained in detail in column after column, Obama’s two terms in office witnessed a stunning and unprecedented withering of counterintelligence and security in Washington, the Snowden debacle being only the most-reported of the disasters which have befallen American intelligence since 2009. This carelessness allowed the Russians to gain astonishing access to the inner workings of our government and our political system. Moscow’s far-reaching hacking of Federal agencies and countless private entities forms only the visible tip of the clandestine Russian spy-iceberg which has collided with Washington in recent years.

There’s no doubt that Vladimir Putin and his spy services played operational games with our election cycle, using Wikileaks to dump tens of thousands of unflattering emails from the Hillary Clinton campaign and the Democratic National Committee. Their impact on the election is difficult to determine but it was doubtless harmful to Team Clinton.

Moreover, Donald Trump’s ties to the Kremlin, ranging from his tendency to mouth unfiltered Russian propaganda, his odd personal linkages to Moscow, plus the ties of members of his inner circle to Russian intelligence, were all things I explained in detail in the lead-up to the election. These questions merited serious, dispassionate counterintelligence analysis, and still do.

However,  since their defeat on November 8 liberals have been looking for scapegoats to explain how Hillary Clinton lost to Donald Trump—an unexpected outcome that many on the left seem literally unable to process and accept. First, Hillary and her minions blamed the FBI and its director, James Comey, for allegedly throwing the election to Trump by announcing that the Bureau was reopening its investigation of EmailGate—then pulling back.

When blaming the FBI proved insufficient to explain away Hillary’s defeat, her allies in the mainstream media turned their spotlight on an alleged plague of “fake news” that supposedly transformed millions of low-information citizens into Trump’s dupes. While there undeniably is a problem here—as in the age of the Internet wholly false, indeed absurd stories can gain traction for a time before they are debunked—this problem is hardly present on the right-wing only. Not to mention that more than a few MSM mavens are willing to term as “false” certain stories which they merely don’t like and don’t want to talk about.

This brings us to the Russians, the ultimate election bogeyman. Since it’s a fact that Putin and his covert operatives interfered with our election in a propaganda sense (anybody acquainted with Russian spycraft knows the proper term here: Active Measures), bitter-ender liberals have now decided that Kremlin hacking threw the election to Trump. The president-elect is therefore illegitimate and, presumably, Hillary can now move into the Oval Office which the left considers rightfully hers.

While there’s no doubt that Russian intelligence is capable of hacking into at least some election systems, the highly fragmented nature of how America elects its presidents would make cyber-interference in the process very complicated—and none too difficult to detect. This hasn’t stopped Hillary’s fans from stating it could be done, without evidence.

Desperate left-wing journalists have taken to making up stories to boost this narrative. For instance, Mother Jones seized upon the statement from NSA director Admiral Mike Rogers that a state actor (he didn’t name a country but he obviously meant Russia) had used Wikileaks to disseminate hacked emails about Democrats—I said the same months ago—to produce a headline that “The NSA Chief Says the Russians Hacked the 2016 Election.”

Which Admiral Rogers emphatically did not say. There’s a big difference between using a front like Wikileaks to spread purloined propaganda—that’s old hat in Moscow—and actually manipulating election returns in the ether to elect a president more to Russia’s liking. That is an extraordinary claim and as such requires hard evidence.

It needs to be said that nearly all of the liberals eagerly pontificating about how Putin put Trump in office know nothing about 21st century espionage, much less Russia’s unique spy model and how it works. Indeed, some of the most ardent advocates of this Kremlin-did-it conspiracy theory were big fans of Snowden and Wikileaks—right until clandestine Russian shenanigans started to hurt Democrats. Now, they’re panicking.

Liberal hysteria is building, and nobody on Team Clinton has done anything to tamp it down. Which they should, since these unfounded accusations are only serving to make an already toxic election cycle even worse. The country is already divided enough, it’s irresponsible to divide it further with outlandish claims lacking any proof.

Liberal stalwart Paul Krugman this week tweeted, “Without an investigation, the suspicion of a hacked election will never go away.” Such evidence-free assertions are politically harmful and should be treated as the MSM version of far-right rants about chemtrails, black helicopters, FEMA death camps, and lizard people.

Our Intelligence Community has been on high alert for months, looking for evidence of Russian interference in our election. If they have any—it would almost certainly come from NSA and be classified Top Secret-plus—it has beyond any doubt been shared with the White House. And that information would be so politically significant that the spies would find a way for President Obama to share that information first with Congress, then with the public (the latter albeit in highly redacted form).

To date, we have heard nothing. Therefore, either the Intelligence Community has no evidence of Russian hacking of our election, or the president has decided to sit on that explosive information. Which would make Obama part of this Vast Right Wing Plus Kremlin Conspiracy. It’s binary, there is no third option here. Liberals need to make up their minds. 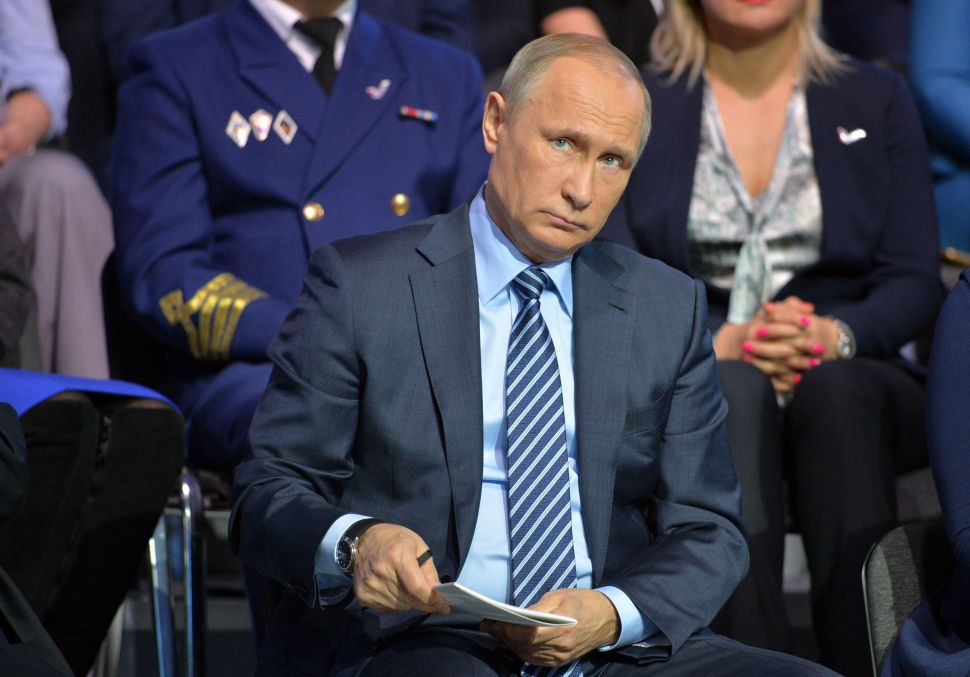