Symphony Advanced Media reported today in its newsletter that Marvel’s Luke Cage has been the comic book company’s biggest streaming hit this year. The show runs on Netflix, which doesn’t report on viewership numbers, but if Symphony’s numbers are accurate, fans of the bulletproof vigilante should have a sequel to look forward to (assuming Mike Colter wants to do it). After all, based on these numbers, it outperformed Daredevil season 2, and we already know that there will be a season 3 for MCU NYC’s leading man.

According to SymphonyAM’s estimates, Luke Cage opened stronger than shows like Making A Murderer and Stranger Things, but the superhero show fell short of the other two shows performance over the course of each shows’ first month. Symphony estimates that in the 32 days following the release of Marvel’s Luke Cage, 6.34 percent of video viewers aged 18 to 49 were watching Luke Cage in an average minute. Yes, these terms are weird, but it’s how ratings are done. This reporter was one of those viewers, actually taking the day off to binge watch the full run the first day.

In short, Luke Cage hasn’t been Netflix most popular streaming original, but it has been Marvel’s best this year. The top spot goes to Orange Is The New Black and (ridiculously) Fuller House.

Season 2 of Marvel’s Daredevil only did 5.94 percent by the same metric. Stranger Things and Making a Murderer (which technically came out late last year) got 9.81 and 9.1 percent, respectively. Based on the first week after release, Luke Cage beat both; however, both shows saw surges later as people started talking about them (Observer readers knew about the latter show early in the hype cycle).

It’s worth revisiting how the company gets this information. We’ve reported in the past on Symphony, the company that pays people to give the company access to their mobile phones’ sensors. Critically, consumers gives the startup access to their device’s microphone, which allows it to take samples of ambient sound. With that, it can pick up sounds from TV shows, which is how they derive their ratings. Watching live TV? It also follows Symphony app users around using GPS to see if they visit stores who’s ads they have seen.

It’s weird and creepy. You know what else is weird (but not creepy)? The complete lack of significant superhero cameos in Luke Cage.

Krysten Ritter’s Jessica Jones seemed the most natural guest, since Cage played a big role on her show. Spoiler alert: she never shows up. In the first set photos from the mini-series that will cap Marvel’s first run on Netflix, though, we already seen a major Luke Cage supporting character, Misty Knight, meeting Jones.

The next Marvel show to stream on Netflix will be Marvel’s Iron Fist, debuting March 17. 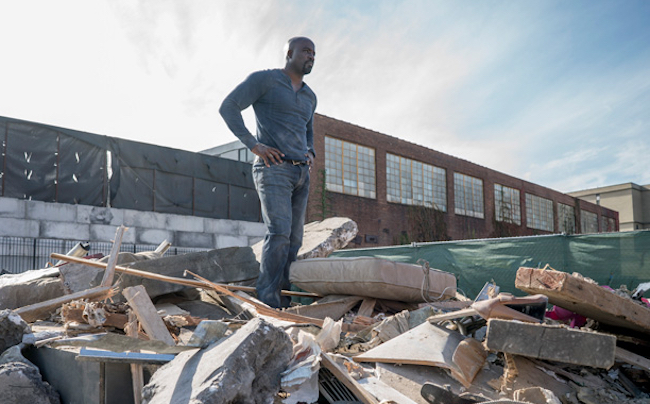