200 or so visitors poked their heads through an arched, human-sized mouse hole draped in black at Mana Contemporary to get to the art center’s theater for a Friday evening performance. When they emerged an hour later, they had traveled forward in time but also backward, to the heyday of Bauhaus.

Virtually There, a work co-conceived by artistic directors Mafalda Millies and Roya Sachs at Mana, runs through tonight. Though technically a ballet, it is also a modern-day Gesamtkunstwerk, or synthesis of music, drama, spectacle and dance.

Five faceless dancers affixed with space-age fripperies pivoted and lurched to music that seesawed from heavy percussion to mournful violin, and a foreboding mood took hold. The frenetic performance told the packed house something about a world in the grips of the digital era: as we evolve to keep pace with it, we may end up unrecognizable both to each other and the past that gave it liftoff.

“The same mental and physical shift was happening almost 100 years ago,” Millies told the Observer. “The more we read about The Triadic Ballet, the more we realized it,” she said, referring to the historical work on which hers is loosely based.

The Triadic Ballet, created by the Bauhaus artist Oskar Schlemmer in 1922, provides Virtually There its backbone. Schlemmer’s ballet, sometimes called “a mechanical dance,” and first performed in Stuttgart, tells the story of a world in flux. It’s known for choreography limited by its massive sculptural costumes and deliberate, un-fluid movements.

“Oskar Schlemmer was showing the impact the Industrial Revolution was having at the turn of the century, how it was affecting society in these many ways. The concept of bringing that idea into the digital age inspired us,” Sachs said. “There are a lot of similarities between what was happening then and what’s happening now.” ociety is again changing.”

Millies, a film and art director, and Sachs, a curator and creative director, live in New York. Both are German and have delved into Bauhaus theater in recent years; their pasts lent a mutual familiarity with Schlemmer. “We thought there was something intrinsically special and avant-garde about his work,” Sachs said. A year ago, they began cooking up the homage that would become the three-act Virtually There.

And they had a lot of help. In all, more than 30 collaborators pooled their creative resources to launch the ballet, with the German duo serving as artistic directors.

Its birth at Mana, in Jersey City—a multi-disciplinary arts complex that opened in 2013 and includes a chamber music hall, a foundry for sculptors, a silk screen operation, a museum of Richard Meier’s architectural models, the complete archives of the International Center of Photography, dance studios and more—owes itself to a friend involved with Mana’s artist residency program.

“She suggested we check it out—both of us had never been to Mana—and we loved how raw the space looked from the outside,” she said of the former tobacco factory. “We also loved how it had an emphasis on collaborative energy,” Sachs added. “Once we found out Karole had a dance school there, it all came together.”

Karole is Karole Armitage, the “punk ballerina” whose contemporary works often fold together dance, music, science and art, as they do in Virtually There, which she choreographed. Though there is some pirouetting and classically pretty movement, most of the new show’s dancing is abstract. One dancer, outfitted with what looks like a metallic pleated lampshade over his head and a wider version of it over his torso, moves elegantly but robotically, with the stiffness of a tin man.

“We never thought she’d work with people like us, who have such a humble approach,” said Millies, of Armitage. “She’s worked with so many magnificent people. But once we approached her she jumped onboard.”

The Campana Brothers, Fernando and Humberto, also didn’t feel Millies and Sachs’ were too humble in their approach. The Brazilian siblings, whose furniture designs are in the permanent collections of the Centre Georges Pompidou and MoMA, designed the costumes, cobbling together materials including blinking LED lights, holographic mirrors, rubber tubes, latex inflatables, colorful plastic baubles and woven fabric, much of it from New York’s Chinatown.

The Whitney Biennial artists Kate Gilmore and Heather Rowe took on the minimal staging for Virtually There, and the underground French composer Charles Derenne handled the blend of live and digitized music. A violinist was visible backstage as the dancers performed on a stage set with moving mirrored panels and a low, climbable pyramid.

But the stark stage proved no boundary: The dancers also moved freely through the theater, up a runway and on small side stages, as the lights played tricks in the room, creating shadowscapes on the walls and a full pink moon overhead.

Millies and Sachs think it also marks the right time to celebrate his prescience and perceptiveness.

Just as Schlemmer did nearly a century ago, “we’re hoping to awaken people to all these factors of technology,” Sachs said. “How it’s influencing the way we think about ourselves, the way we act, the way we communicate. We hope we’ll get people to explore these ideas.” 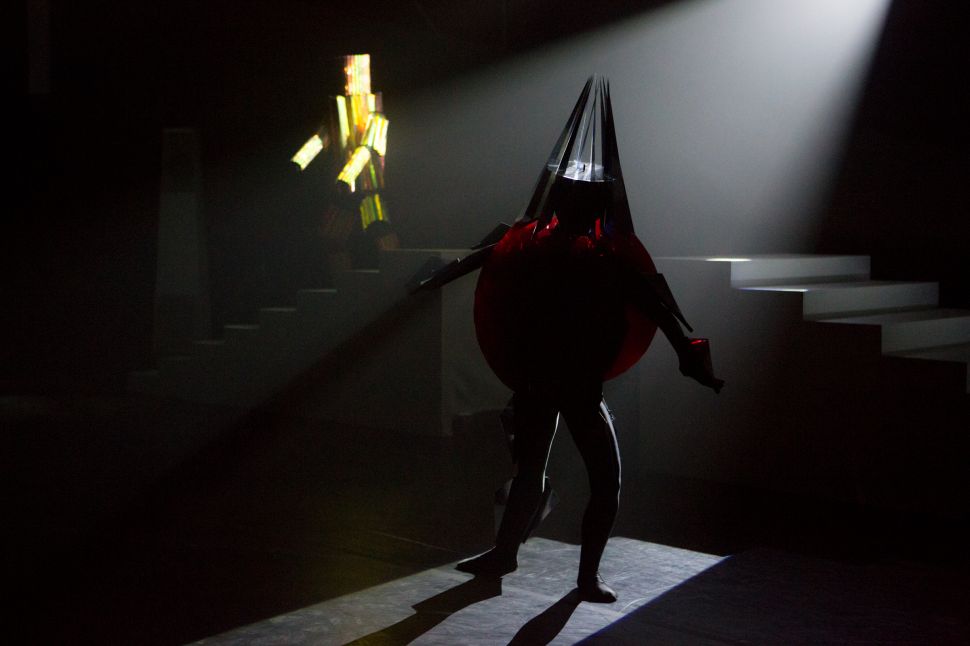