“The 1980s are now calling to ask for their foreign policy back because the Cold War’s been over for 20 years,” stated President Obama acidly, publicly mocking Mitt Romney’s assertion that Russia was America’s “Number One geopolitical foe.” The former Massachusetts governor, who had won the Republican presidential nomination, criticized the Obama White House’s “reset” with Russia, which Romney felt had failed, only encouraging Kremlin bad behavior.

In response, Romney was jeered—first by President Obama in a debate on October 22, 2012, then by leading Democrats and their mainstream media echo chamber, which roundly assailed the GOP nominee for allegedly being mired in laughable Old Think. Didn’t Romney, that square, know it’s the 21st century and Obama will “have more flexibility” with Moscow after his reelection?

That was four years ago, almost exactly. It’s time now to admit that Mitt Romney was right and Barack Obama was wrong. The president’s “flexibility” with Russia has meant outsourcing America’s Middle East policy to the Kremlin, while giving Moscow a free hand to steal Crimea and invade Ukraine, plus intimidate Eastern Europe with nuclear saber-rattling. Calling all this a needless geopolitical disaster is charitable.

Nevertheless, four years on, the very same people who assailed Romney’s realism about Russia are hard at work detecting Kremlin plots everywhere, trying to steal the presidential election from Hillary Clinton. Somehow, Vladimir Putin has mysteriously transformed from being a guy we can deal with, no sort of threat, to the devilish figure secretly tearing America apart. What on earth is going on here?

What’s going on is Moscow is trying to prevent a Clinton from moving back into the White House. Fragmenting the Western alliance is always in Moscow’s interest, and so is inducing chaos in Washington, while it’s painfully clear that Putin has personal animus against Hillary too, stemming from late 2011 protests in Russia that the Kremlin boss blames the then-secretary of state for. You try to steal my election, just watch me mess with yours—seems to be the Putinesque logic here, which ought to surprise no one given the Russian president’s former career in counterintelligence for the KGB.

Clinton and her supporters ought to recall how McCarthy’s his scurrilous accusations damaged legitimate American counterintelligence for decades.

Let’s be clear. The Kremlin really is trying to clandestinely influence our election, using fronts like Wikileaks to disseminate propaganda against the Democrats and their presidential nominee. These leaks are proving damaging as the election approaches, portraying Team Clinton as a corrupt, incestuous, out-of-touch and quite coddled elite, as even liberals are now admitting. Moreover, there are very valid questions that need to be asked about Donald Trump’s relationship with Moscow, which grows stranger all the time. Plenty of American intelligence professionals and veterans think the Republican nominee has an unhealthy link to the Kremlin that needs unmasking—and I’m one of them.

All the same, none of that justifies the degree of hysteria that’s currently emanating from Democratic circles about Russia. Practically every day the Clinton campaign proffers new charges of alleged Kremlin malfeasance, usually involving Trump or his entourage. Evidence is hard to come by, however, and the Democrats have thrown caution to the wind in a manner that ought to trouble all Americans.

This has reached a fever pitch since the end of last week when James Comey, the FBI director, informed Congress that his agency has reopened its investigation of Secretary Clinton’s mishandling of her emails when she was the country’s top diplomat. The specter of the notorious EmailGate reappearing practically on the eve of our election sent leading Democrats into unhinged paroxysms of rage. Liberals praised Comey effusively just this summer for refusing to indict anyone for anything in EmailGate, yet have now suddenly decided that the FBI director is, in reality, the illegitimate spawn of J. Edgar Hoover and Dr. Evil.

Venom and scurrilous charges have been flying around Washington in recent days. Harry Reid, the Senate minority leader, wasn’t content to publicly accuse the FBI director of possibly violating Federal law by informing Congress about the new Clinton emails. He additionally accused Comey of withholding facts that the American public needs to know, including “explosive information about close ties and coordination between Donald Trump, his top advisors, and the Russian government.”

Democrats grew even more animated when reports came to light alleging that Comey stopped short of openly blaming Russia for its interference in our election. That these allegations are poorly sourced has not stopped Democrats and their media partners from howling about “double standards” in the FBI’s front office. Follow-up reports that the FBI in fact has been unable to find conclusive links between the Kremlin and the GOP nominee have done little to tamp down this hysteria.

Instead, liberals are hinting at a grand, Moscow-driven cover-up to rob Hillary of her rightful place in the Oval Office, with whispers of Kremlin payoffs to Republicans, compromising material on Trump, and hints of nefarious KGB-like games to destroy America.

This has now reached the absurd point that James Carville, the longtime Clinton surrogate, has accused Republicans of colluding with Moscow to illicitly obtain a Trump victory. Carville alleged that “the KGB” is secretly working in concert with Comey and House Republicans to smear Hillary. In the first place, the Kremlin disbanded the KGB in 1991, so Carville is a quarter-century out of date—while alleging that your political opponents are in league with our enemies is a very serious charge that requires real evidence. Of course, there isn’t any.

Just as over-the-top was the weekend accusation from Howard Dean, the former Democratic National Committee chair, who tweeted, “Comey put himself on the same side as Putin” by informing Congress about new Clinton emails that the FBI is looking into. This is the dirtiest sort of political game-playing, making fact-free assertions to smear your political opponents in a cavalier fashion.

This cannot help but recall the early days of the last Cold War, when right-wingers—most infamously Senator Joe McCarthy—made political hay out of allegations of Communist spies lurking behind every corner in Washington. That there really was a robust Soviet espionage infrastructure in America in the late 1940s didn’t change the fact that McCarthy and his ilk simply made up most of their accusations out of whole cloth, at the cost of ruined lives, careers, and vast damage to our body politic.

It’s therefore supremely ironic that those on the left who for more than a half century have detected the specter of McCarthy whenever anybody on the right mentioned Moscow, are now engaging in toxic political games that are deeply reminiscent of the infamous Tail-Gunner Joe. Hillary Clinton and her supporters ought to recall how McCarthy wound up, and how his scurrilous accusations damaged legitimate American counterintelligence for decades.

Donald Trump really does have ties to people connected to Moscow that need serious and dispassionate investigation. Russia really does spy intensely on America and try to influence our politics to the Kremlin’s advantage. Mitt Romney tried to warn Democrats about the Russian threat four years ago, and got mocked in return.

Not to mention that President Obama and Secretary Clinton bear a lot of the blame for the dismal state of security in Washington that has allowed the Russians to run amok with their espionage and propaganda this year, to the benefit of Donald Trump. That’s a far cry from saying the GOP nominee and his retinue—much less the Republican party—have a hand in Putin’s clandestine games. Such allegations are serious, indeed grave, and should be treated seriously before being uttered for cynical political point-scoring. 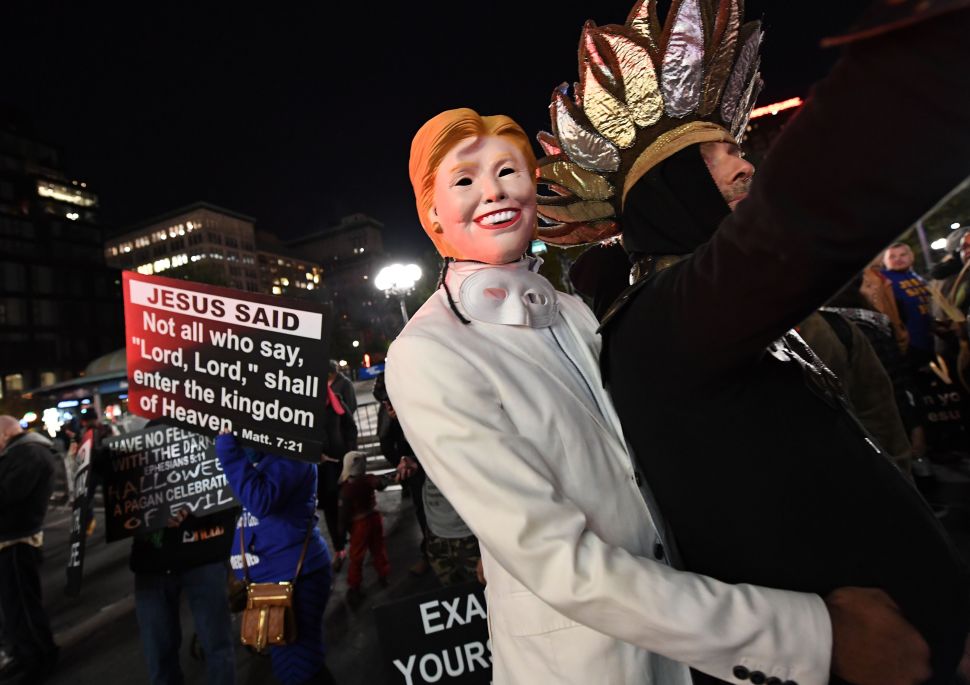