Mouzam Makkar plays Jessica, a woman having an affair with a priest, on Fox’s The Exorcist. Her performance adds a nuanced, real-life element to a very over-the-top show, which I’ve been recapping for this site. We caught up Ms. Makkar to discuss horror, love and the space in-between.

Observer: Tell me about your beginnings, getting into acting.

Mouzam Makkar: It was roundabout– I’d done acting all through high school and junior high, but then I got a finance degree, and I worked in investment banking and private equity. I was living in Chicago and I did improv at The Second City. I did their whole improv program and their writing program, and then I figured, you only live once– I started doing commercials, industrials, independent films, and then TV work started coming. Chicago Fire was my first TV gig, and I ended up moving to Los Angeles.

Are you a horror fan, did you grow up on it?

What on The Exorcist has scared you? Some of the stuff on there has legitimately scared me. Have you watched it and gotten a really good jump out of it at certain points?

It’s been a mix of, like, “Oh my gosh, what are they doing? No, they just did that!” It’s pulled me in while I’ve been in shock as to what’s happening on the screen. It’s been a different type of scary, I’ve really enjoyed it. Because my character hasn’t been really involved in the exorcism part of it, I haven’t really had to do many scary things except for in episode five, where the devil appears in my form. It was great to be in that room, and just how disgusting it is. But because my storyline has kind of been separate from the exorcism part, it’s been interesting, because I think people have asked whether I’ve had any sleepless nights or anything, I’m like, “No, actually, my storyline is very much about love!”

Yeah, you’re on this, like, romantic drama program, while all the other characters have all this gross stuff happening to them that you don’t get to see, for the most part.

Right, exactly, so it’s been interesting to have this kind of different feeling, because every time I go on to the set, my mind is like, “I love him, and this is right and I don’t think I’m being a bad Christian woman or anything,” so it’s been a different feel, but I really did enjoy episode five because I got to kind of be part of the exorcism, part of that world.

[Makkar’s agent] told me, I think, that your character was kept alive an extra five episodes?

I don’t know if I was kept alive an extra five episodes. As a guest star, you only get hired for a couple of episodes at a time, so initially when I got hired, it was for three episodes, and then it kept growing, so I don’t know if that was a matter of them writing more for me or if it was just kind of always the plan. But I ended up getting more episodes than I thought I would get, but I don’t know if something changed or if that’s just how it is. I was always just happy for it to be like, “Oh, you’ve been booked for two more episodes, you’ve been booked for two more episodes.” I’m like, great, that’s awesome.

Because I was thinking about that, and I couldn’t think where it would have fit in to kill you off at any point.

Right, and I won’t reveal anything, but… yeah. I was really excited that they kept writing more, and I’ve loved everything they’ve written for me, so it’s been an absolute treat.

I’m always interested in how some actors come up with a secret that only they know about the character, or how actors read into their character, so I was just wondering what your insight into Jessica in particular was.

I absolutely have secrets for my character, even from the very first scene. The first scene that I did for the show was my initial audition scene: she shows up there in the middle of this park where she’s always met with Father Tomas. I’ve always read it as sort of like, the greatest romance ever, like the forbidden romance. Like these two people were always meant to be together.

I have multiple secrets for my characters, but one of the secrets that I had for that scene was that I came to that meeting with a getaway bag already packed and sitting in the trunk of my car, and that was kind of where my head was at, and I was ready to run away with him at that point, leave everything else behind because he’s the one for me. As I’m sitting there trying to think about everything, it’s kind of like, if he just says the word, if he just says it, if he just gives me anything, I am ready to jump out, grab his hand, and just run off into the sunset. And my character has a dream about what our life is going to be and everything. So it’s always been about how my character doesn’t feel like– I mean, yes, she understands that what’s happening is wrong, she is sleeping with a priest, but in the grand scheme of things, it’s love, and that’s what it is, and God can’t be against love, and Tomas can still serve God without being a priest. My window into Jessica has always been about love– nothing more than the fact that this is the man that she believes that she is supposed to spend the rest of her life with, and she loves everything about him. Unfortunately, one of the things she loves about him is the fact that he is such a good man, and a priest.

Do you ever judge them, or do you fully see things from their perspective?

As I get into the character, I try to be as human about it as possible. As humans, we never think the thing we’re doing is absolutely right. There’s always a hint of, like, “Oh gosh, I shouldn’t– aw, crap, what am I doing?” So there’s absolutely that and I think that’s what’s kind of eating away at her in episode seven, when she’s in bed with him and it’s just like, something’s wrong. She already knows that because of what they’re doing, their relationship has changed. Like, this is a relationship where Tomas told Jessica everything. Tomas called Jessica whenever he wanted to talk about something, and all of a sudden, now that they’re sleeping together, he’s not talking to her. So she already knows that there’s something wrong, something doesn’t feel right to him, and it is this secret. Sure, she’s left her husband, but she’s still a married woman, and I believe that Jessica’s Catholic, so there’s all this stuff that’s in her but she’s trying to make this work, but it’s not, because Tomas has changed, he’s not treating Jessica the way he used to before they started sleeping together.

They’re the only people that know that about each other, so they should be privy to the utmost secrets, one would think, and then from her perspective it’s like, “What, something’s going on at work? What?”

Exactly, and you have this bandage on your arm? What is going on? Nothing is adding up. So I think absolutely Jessica believes in her love, but she knows it’s a secret. It’s not like they can go out and go to the mall and hold hands, have dinner. It’s not like that and she knows that.

Anything else you can tell me about Jessica?

I don’t want to give anything away, but you haven’t seen the last of Jessica, is all I’m going to say. There’s only more twists coming. We have two more episodes, and there’s a lot packed into those two episodes.

[The interview has been edited for clarity and conciseness] 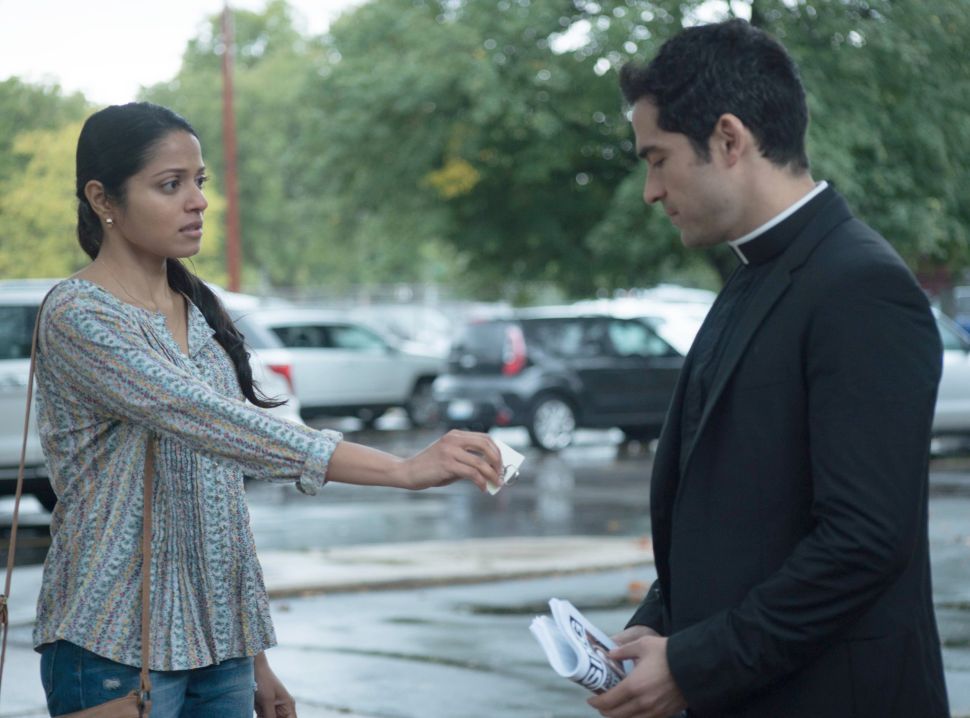