On a livestream sponsored by the private search engine Startpage, on RT’s YouTube channel, NSA whistleblower Edward Snowden today directly addressed the United States’ election by saying that it is more important to focus on longstanding issues than it is to worry about leaders.

“If we want a better world, we should not hope for an Obama and we should not fear a Donald Trump. We should build it ourselves,” he told the crowd.

He pointed out that President Obama had declined to make many of the human rights reforms he promised as a candidate.

“The current president of the United States campaigned on a promise of ending mass surveillance,” Snowden said. He then rattled off a list of other promises the current president had made during his first campaign, such as to close Guantanomo and end extra-judicial killings. “It was a moment that we believed that because the right person got into office, we believed that everything would change,” Snowden said, but none of those things happened.

In fact, far from being more accountable, the Associated Press found that the Obama White House has denied more Freedom of Information Act requests than any of his predecessors.

“We should be cautious about putting too much faith or fear in the work of elected officials. At the end of the day, this is just a president,” he said. “I try to focus on the issues that matter the most.”

‘If we live in accordance with our values, we don’t have to worry about what happens tomorrow, because today is enough.’—Edward Snowden

We recently reported on the threat to democracy presented by the fact that the least wealthy tend to use insecure Android phones, rather than the more expensive iPhones, which have privacy features on by default. It’s a point that Snowden underscored as he again made his argument that privacy matters whether or not most people feel they actually need such protections.

“Privacy is not intended for the majority,” he said.

“Privacy isn’t about something to hide. It’s about having something to protect,” he argued, pointing out that free speech has no value if there is no safe, private space for a person to try out ideas out loud and find the ones that fit them. “Privacy is the right to the self,” he said.

It’s natural, he said, that the people who conform to the majority will tend to believe that privacy isn’t necessary. It’s the outsiders who need privacy. We all revere the outcasts of the past, such as Susan B. Anthony,  César Chávez and Harvey Milk, but without strong privacy protections, today’s change makers might never find their voices before they are silenced.

Snowden argued that regular people shouldn’t have to be technical experts to keep their privacy. Encrypting email is already hard enough, but it leaves a trail of data about the fact that a message was sent and who it went to. That alone is dangerous information inside a state searching for enemies, Snowden contended.

“We have to find ways to protect not only the content of the text message or the phone call, but to disguise the fact that the communication happened at all,” he said.

He asked that members of the crowd support, with time and money, organizations that will sue governments when they break the law.

He said, “When we find out that the law is not enough, that the law is only the smallest guarantee of our rights, support technology, corporations, groups and individuals who are trying to enforce your rights directly through science, through math, through technology.” 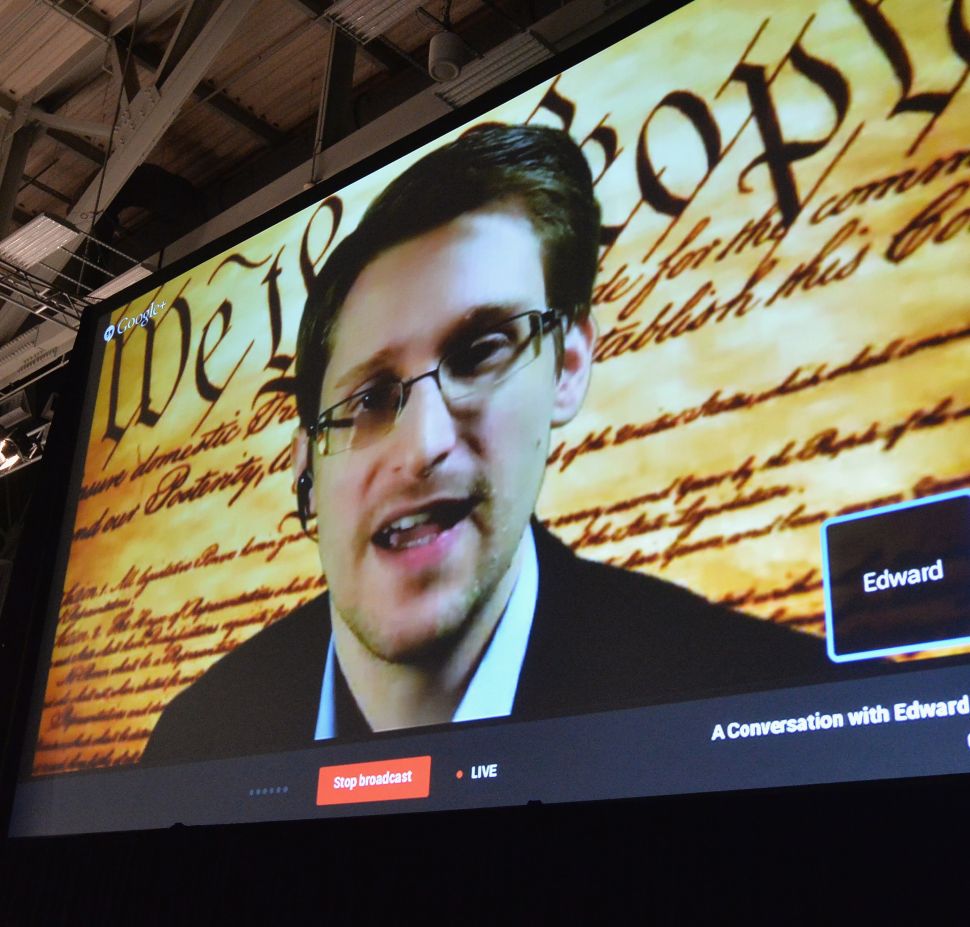