Mayor Bill de Blasio and NYPD Commissioner Chief O’Neill vowed the city can handle providing security for both the Thanksgiving Day Parade and Trump Tower tomorrow, as thousands pour in and out of the city for the holiday.

The pair assured the press and public at a conference today that the NYPD has put nearly 50 traffic agents and police officers on each shift to oversee traffic flow from 53rd to 57th Streets between Fifth and Madison Avenues surrounding Trump Tower. There will also be more than 80 sand trucks in place to block off the streets as well as more than 3,000 officers, and no point where cars will cut across the parade route.

De Blasio added that there is “no credible and specific information of any specific threat” directed at the parade.

“We have a huge NYPD presence and there’s been a lot of careful preparation to make it go well,” de Blasio continued. “So that’s what we do every year. As you see, we’ve added some additional measures this year but that’s more about some of the things that are happening internationally than what’s happening nationally.”

The mayor did acknowledge the extra strain of protecting President-elect Donald Trump‘s flagship property in addition to the usual Thanksgiving mobilization. But he credited City Council Speaker Melissa Mark-Viverito—who was also at the press conference—and the City Council for approving the addition of 2,000 cops to the force by January.

He also maintained that there will be “increased effectiveness” thanks to new technology, new training, new smartphones and specialized forces “at a level we never had before,” citing the Critical Response Command unit as an example.

“So yeah, we are facing some new challenges but we also have a lot more capacity,” de Blasio said. “Of course, we’ve started literally right away on the effort to get the federal reimbursement that we’re gonna work for to help bring back some resources for what we have to do with Trump Tower and that’ll help us defray the costs.”

De Blasio has pushed for a federal reimbursement of the reported $1 million a day the city expends protecting Trump, his family and his flashy real estate holdings—at the same time as he has vowed to defy the president-elect‘s plans for deportation of undocumented immigrants and the creation of a Muslim registry. City Comptroller Scott Stringer has warned this could endanger some $7 billion the city receives each year from Washington.

Police Commissioner James O’Neill said that their current plan for the building will remain in place.

“The plan at 56 and 5 is still in place,” O’Neill said. “We’re used to dealing with complex issues and we have solutions to all the complex issues.”

With the city distracted with Thanksgiving preparations, City Hall released hundreds of pages of emails between de Blasio, his top aides and Jonathan Rosen, a high power consultant from the firm BerlinRosen. The administration had previously resisted Freedom of Information Act requests for the messages by NY1 and the New York Post by asserting it was privileged correspondence with an “agent of the city.”

The TV station and tabloid filed a lawsuit against City Hall in September to force it to emails on the grounds that the public has a legal right of access to communications between the mayor and non-city employees. The office today handed over some of the emails, but not all, and heavily redacted what it divulged. 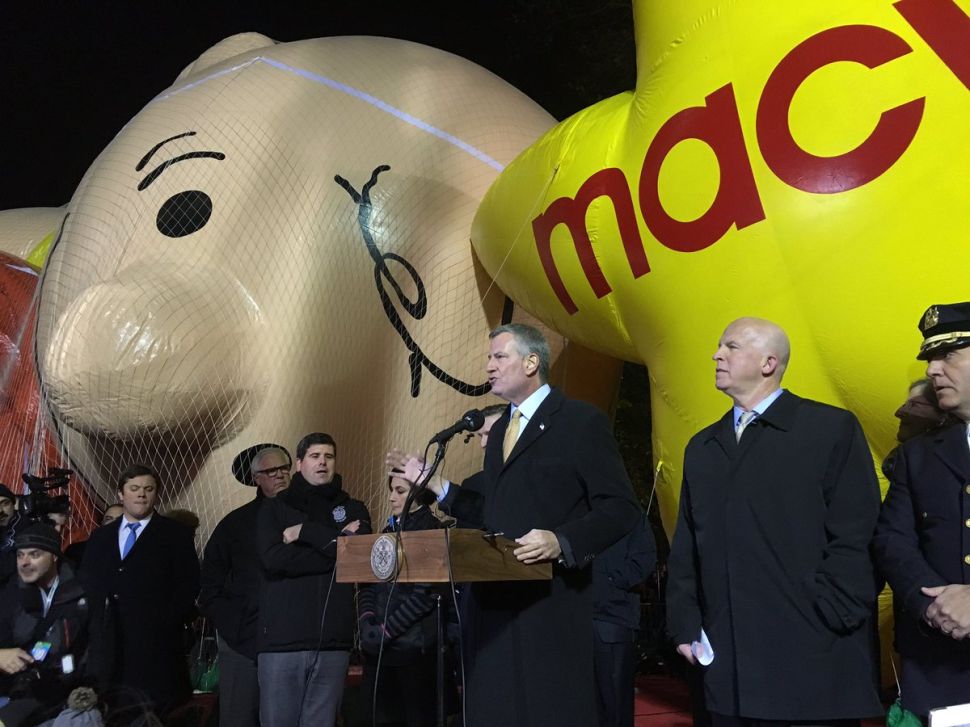