Hours before Democratic presidential nominee Hillary Clinton was scheduled to speak at the Jacob Javits Center in Hell’s Kitchen tonight, New York’s top politicians and some of Clinton’s most prominent surrogates rallied behind the nominee, calling her the best candidate to address the country’s most pressing issues and insisting she would win the election.

Mayor Bill de Blasio, a liberal Democrat, kicked off the block party outside the center, which was attended by hundreds of supporters carrying flags and cheering any time they heard Clinton had a lead in any state—even as projected results indicated that her opponent, Republican presidential nominee Donald Trump, was leading her. The mayor, who managed Clinton’s 2000 bid for the U.S. Senate, said Clinton has spent a lifetime advocating for all individuals and that she is devoted to building the middle class again and ensuring wealthy individuals, corporations and Wall Street “don’t get to pay a lower tax rate than the rest of us.”

He also said she would raise the minimum wage across the nation, reduce students’ college debt and take on issues particular to cities—affordable housing, mass transit, repairing roads and bridges, policing reform and immigration reform.

“These are the kinds of changes we needed for years and it’s gonna take a tough leader, an aggressive leader, a leader who understands our lives,” de Blasio said. “That leader, in just a few hours, will be declared the victor of this election.”

De Blasio featured in an array of hacked emails from Clinton campaign manager John Podesta’s account that Wikileaks released. The indicated that d different positions publicly and privately on Clinton’s bid early in the campaign.

For several months after former first lady announced her candidacy in April, the mayor demurred on endorsing his former boss in talks with the media. At the same time, he was desperately seeking direction from the campaign, even as top officials mocked him as “a terrorist”

Council Speaker Melissa Mark-Viverito, who became a prominent Clinton surrogate during the Democratic primary, similarly numerous accomplishments and also argued that she would triumph at the end of the night.

“It is a pleasure and a privilege to stand before you tonight in support of mi amiga, my friend, a fellow New Yorker and the next presidenta de los Estados Unidos: President Hillary Rodham Clinton,” Mark-Viverito said.

New York Sen. Charles Schumer—who trounced his Republican challenger toight—even got the crowd to chant, “I believe she will win” multiple times throughout his speech. He said he believed Clinton is the best person to tackle issues such as raising the minimum wage, make college more affordable, create good-paying infrastructure jobs, tackle climate change, immigration reform and revamping the criminal justice system.

“Hillary, all the attention and scrutiny never stopped her, never slowed her down,” Schumer said, recalling their eight years together representing the Empire State in the Senate. “She rolled up her sleeves and got to work right on day one.”

Gov. Andrew Cuomo also reiterated the sentiment that Clinton pull it out, even as Trump picked up swing states like Florida, Ohio and North Carolina.

“Are we fired up? Do we love Hillary? How exciting is this?” Cuomo told the audience as they cheered loudly. “How exciting a night. And it has been some campaign and it’s ending on some night. But I believe and you believe that Hillary Clinton is gonna be the next president of the United States.”

But he noted that this year’s campaign was different because most elections are about who is elected but this one focused on “who we are as a people,” accusing Trump of fanning “the flames “of that negativity and that division.”

“He thought he was gonna be able to drive us apart and find an enemy and he came with a campaign that said, ‘If you’re in pain, you’re feeling anxiety, I’ll tell you who to blame: people who are different,” Cuomo continued. “Yea, we’re white, we’re brown and we’re proud. Yes, we’re gay. Yes, we are gay, we are straight and we are proud. We are Christians, we are Muslims, we are Jews and we are proud.”

Khizr Khan—the father of a Muslim soldier who was killed in Iraq in 2004—commended voters for being part of the election and a mission that embodies tolerance, diversity and an embrace of new Americans.

“Regardless of the hatred of Donald Trump, we have all been moving forward behind our leader, a leader that embodies the values enshrined in the Constitution of the United States—our leader, Hillary Clinton,” Khan said, garnering applause from attendees.

Khan rose to prominence during the Democratic National Convention where he blasted Trump for his proposal to ban Muslims from entering the United States.

Senator Kirsten Gillibrand, singer Katy Perry and the Mothers of the Movement—the parents of African-Americans killed by police—also spoke in support of Clinton during the block party. 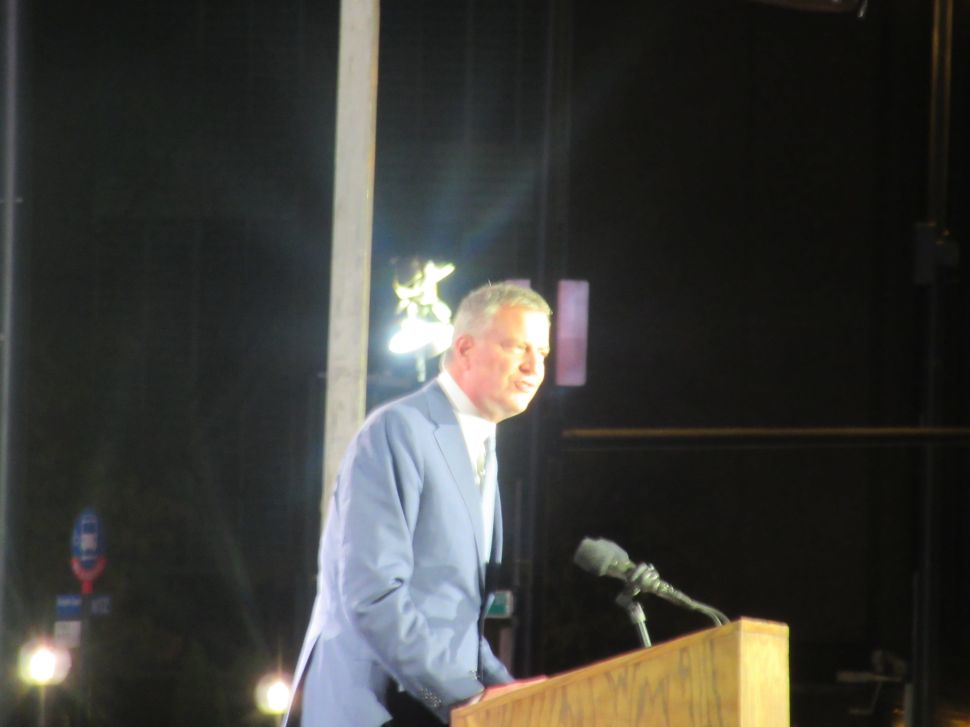