It’s a rainy Wednesday in New Jersey, and while the precipitation is supposed to fall all day, concern remains about drought conditions in the state. Environmentalists are using the situation to call for the release of a long overdue, and likely politically unpopular, water usage plan, which is now 15 years overdue.
In Atlantic City, the state is facing a lawsuit from the new owner of the former Revel casino, who objects to state licensing requirements. As comedian Joe Piscopo ponders a GOP gubernatorial bid, he still has not reached out to the powerful head of the Ocean County Republicans, who seems more likely to back a run by Lt. Gov. Kim Guadagno. Whoever is the next governor will have to deal with some housekeeping headaches at the office, as Gov. Chris Christie announced plans for a four-year renovation of the capital building, while also reiterating his desire to finish out his term – unless President-elect Donald Trump calls with an urgent job offer.

Quote of the Day: “When the draft plan is complete and ready for public comment, we will release it and schedule public hearings.” – Department of Environmental Protection Spokesman Bob Considine, on the ETA for a state usage plan that is 15 years overdue.

As Drought Worsens, Renewed Call For Release of Long-Overdue Plan
As New Jersey’s drought worsens, state advisers on supply are renewing their call on the Christie administration to release a blueprint for planning that has not been publicly updated since 1996 despite a legal requirement to do so every five years.
Jon Hurdle, NJSpotlight Read more

The man who wants to send Christie to jail
Bill Brennan was a man on a self-professed mission on that Tuesday this past September when he drove from his home in Wayne to the federal courthouse in Newark.
Mike Kelly, The Record Read more

Judge to weigh special prosecutor in Christie-bridge case
A citizen activist is asking a New Jersey judge to appoint a special prosecutor to investigate whether Gov. Christie broke state law when he allegedly refrained from ordering his aides to stop a political payback scheme involving the George Washington Bridge in 2013.
Andrew Seidman, Inquirer Read more

Gilmore: No call from Joe Piscopo
Ocean County Republican Chairman George R. Gilmore said Tuesday he had not spoken to Joe Piscopo about the comedian’s gubernatorial aspirations, despite a published report that the Saturday Night Live alumnus has been calling GOP county chairs to gauge their interest in his candidacy.
Erik Larsen, Asbury Park Press Read more

Christie trolls the press
After Gov. Chris Christie issued a vague advisory saying he was going to make a “press announcement” on Tuesday at the New Jersey Statehouse — his first in months — the speculation began, and his phone went “nuts all night.”
Ryan Hutchins, Politico Read more

McGreevey prison program moving from church at center of FBI investigation
A non-profit prison re-entry program housed in a Paterson building at the center of an FBI investigation is moving mid-December to another facility nearby to accommodate more people.
Sara Jerde, NJ.com Read more

Board of education to introduce transgender policy
The Hackensack Board of Education will consider approving on Tuesday a set of regulations on how to handle transgender students.
Rodrigo Torrejon, The Record Read more

Workers protest for $15 minimum wage at Newark airport
As part of a national demonstration, workers part of the Service Employees International Union converged at Newark Liberty International Airport on Tuesday afternoon to rally for a $15-per-hour minimum wage — which is what New York airport workers make, organizers say — and to advocate for fairer working standards, according to numerous reports.
Katie Park, Asbury Park Press Read more

5 N.J. professors make conservative group’s ‘watchlist’
When Peter Singer heard a conservative group put out a new watchlist singling out college professors with “leftist” and “radical agendas,” the veteran Princeton University professor was not surprised to hear he was on it.
Kelly Heyboer, NJ.com Read more

Gay nonprofit in religious Jersey Shore community sues over eviction
A gay and lesbian community center is taking its landlord to court, claiming its lease was terminated because of anti-gay bias.
Sergio Bichao, NJ101.5 Read more 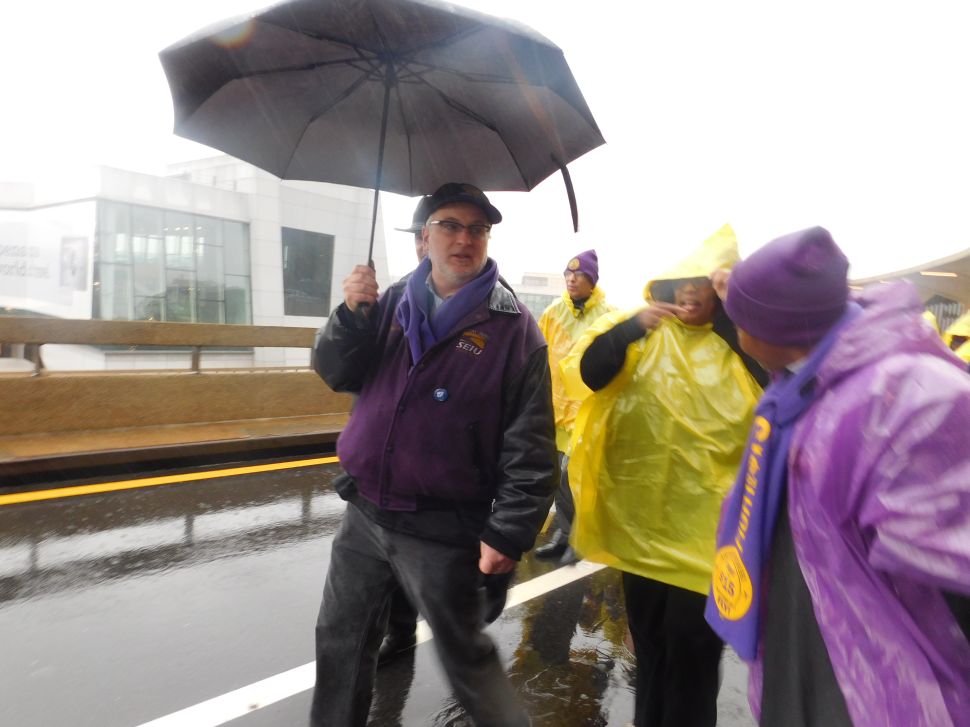