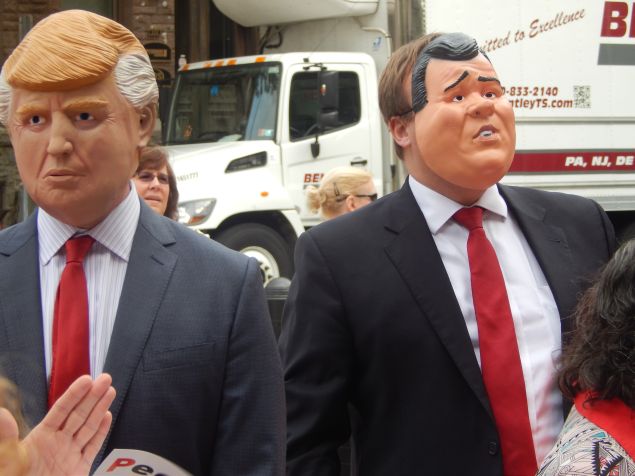 Masks in the crowd. Max Pizarro for Observer

As news of Donald Trump’s victory sinks in, the big question in New Jersey is what does this mean for Gov. Chris Christie, whose political fortunes had seemed to hit rock bottom less than a week ago. Now it’s likely Christie will play some role in the Trump administration, restoring the unpopular governor’s political future and also giving a boost to Lt. Gov. Kim Guadagno’s ambitions. Post-election coverage around the state include’s residents’ reaction to a Trump victory, a look at how New Jersey’s Kellyanne Conway helped Trump win the White House and Sen. Cory Booker’s response to the Republican victory. There’s also reports on how Trump trade policies could impact the state and how Tuesday’s results could help New Jersey commuters.

In New Jersey politics, the state has moved to take control of Atlantic City’s finances, granting the director of New Jersey’s Local Finance Board powers to try to turn the city around and the state Supreme Court is set to rule on whether departments must release the names of officers who use fatal force.

Quote of the Day: “It’s not too small of an observation to say that Tuesday night has potentially changed the entire trajectory of Chris Christie’s political life.”—GOP strategist Bruce Haynes, on the likelihood of Gov. Chris Christie being named to a post in the Trump administration

Trump win could open up future for Christie
Suddenly Governor Christie’s future in New Jersey may be finished in a matter of weeks.
The stunning victory of president-elect Donald Trump in Tuesday’s election opens the possibility that Christie, a friend and adviser who is leading his White House transition, will be tapped for an administration position.
Dustin Racioppi, The Record Read more

Christie’s long shot bet on Trump proved to be a winner
Back in July, Governor Christie justified taking perhaps his last bold gamble, the placing of all of his political capital in Donald Trump’s rollicking roulette wheel of a presidential campaign.
Charles Stile, The Record Read more

A Trump trade war would be bad for NJ businesses
Donald Trump has talked tough on China, promising to impose a 45-percent tariff on Chinese imports in order to reverse the offshoring of American jobs to China.
Russ Zimmer, Asbury Park Press Read more

Gateway tunnel builder expresses hope for Trump administration
The day after Donald Trump was elected president, the Democrat running the most important transportation project in the New York metropolitan region, if not the country, struck an optimistic tone when asked what Trump’s presidency might portend for the project’s fate.
Dana Rubinstein, Politico Read more

Guadagno could get incumbency advantage, with Christie potentially leaving for Trump
Get used to saying Governor Guadagno.
The ripple effects of Donald Trump’s presidential win will reach the governor’s office in Trenton if Christie moves on to a national role in or around the Trump administration.
Matt Friedman, Politico Read more

Hudson voting woes: Woman alleges voter fraud, pols want solutions to long lines
When Zobeida Nunez went to vote a School 24 Tuesday afternoon, she said she was asked if she was carrying any documentation that had her name on it.
Caitlin Mota, The Jersey Journal Read more

Seeing red in 2016: Trump picks up Bergen towns won by Obama
Hillary Clinton won a majority of the vote in both Bergen and Passaic counties on Tuesday. But, mirroring national trends, a cluster of mostly blue-collar southern Bergen towns from Saddle Brook to North Arlington went from favoring Democrat Barack Obama in 2012 to endorsing Republican Donald Trump in 2016.
Dave Sheingold and R.L. Rebach, The Record Read more

When a high-profile N.J. race foreshadowed Trump’s big upset
The race will always be remembered for how badly the pollsters missed it.
S.P. Sullivan, NJ.com Read more

For some, a day to pay homage to suffragist Alice Paul
At the South Jersey grave site of suffragist Alice Paul, a handwritten thank-you letter, a single red rose, and bouquets of purple, yellow, and white flowers were among the items piling up Tuesday, as the first woman nominated by a major party for president appeared on the ballot nationwide.
Jan Hefler, Inquirer Read more

Election Day winners & losers in Jersey City
The nation is focused on the biggest winner and loser of Election Day 2016—Donald J. Trump and Hillary Clinton—but there was some good and bad news for local candidates, too.
Terrence T. McDonald, The Jersey Journal Read more

N.J. Supreme Court to decide whether agencies must release names of cops who use fatal force
In one of the biggest legal battles over government transparency in New Jersey, the state Supreme Court is poised to determine how much information the public receives in the hours and days after police officers use fatal force.
Salvador Rizzo, The Record Read more

Monmouth Park reassesses after casino bill defeated
Given the recent polling numbers, it was no surprise that the referendum to expand gaming outside Atlantic City by building two casinos in North Jersey was soundly defeated, with 78 percent of voters rejecting the idea.
Stephen Edelson, Asbury Park Press Read more 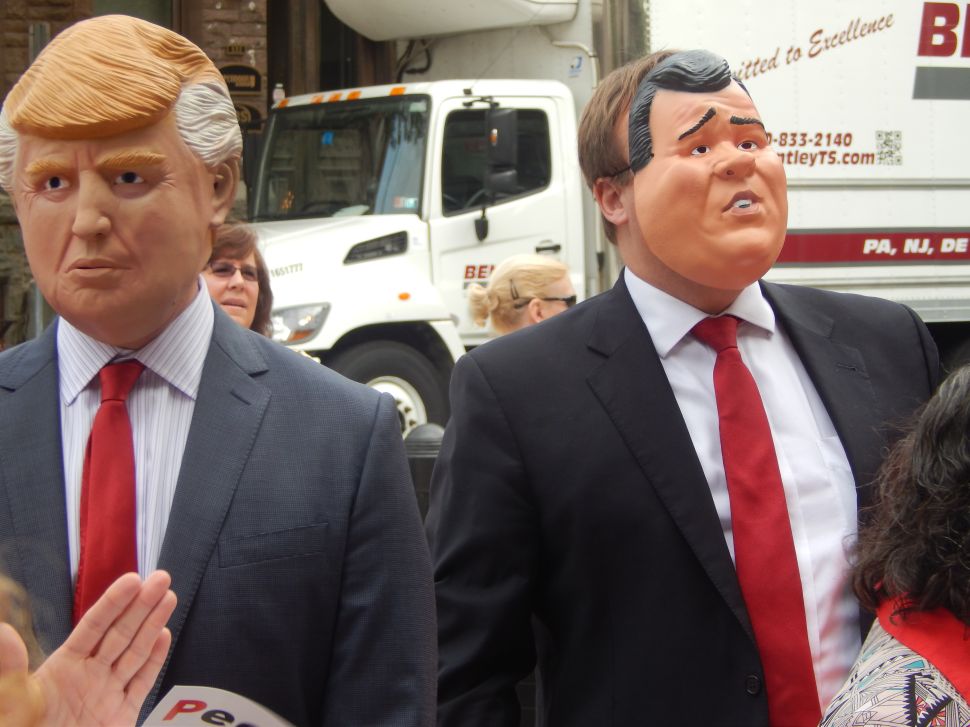