Though many of them serve as significant supporters, veterans have received little media attention in the fight to stop the Dakota Access Pipeline.

“The last healthy land masses on our planet are not coincidentally those occupied by Indigenous Peoples,” said Four Arrows (Wahinke Topa), a.k.a. Don Trent Jacobs, the co-founder of the Northern Arizona chapter of Veterans for Peace in a statement. “That they are on the front lines in standing against oil and mining operations threatening to destroy waterways should not be surprising. The Indigenous worldview, one that guided humans to live in relative ecological harmony, sees this place as sacred…At this crossing point in American history, at the threshold of a mass extinction, the Standing Rock protest is much more than symbolic and deserves all the support Veterans for Peace can give it.”

Recently retired First Class Petty Officer Kash Jackson donned his dress blues on horseback in solidarity with #NoDAPL, hoisting an upside down American flag to signify the distress our country is in; that such injustices and human rights violations are being conducted by the government without any sort of reprimand. After serving his country, he is continuing his service by standing up for the Native Americans fighting the Dakota Access Pipeline.

‘To say the whole experience was not just inhumane, but degrading, would be an understatement.’

“I retired from the United States Navy after 20 years of service on August 31, 2016,” said Jackson in an interview with the Observer. “On September 1, I launched a campaign called Restoring Freedom. I launched this campaign initially to try to restore family and constitutional human rights to men and women like myself and our children, who are being violated by the court system and exploited for money.” Jackson spent $40,000 in legal fees while in service over custody battles in family court. “But I’ve expanded that because I knew freedoms elsewhere in America were being violated. It wasn’t just in family law, it’s everywhere. What I swore to protect is being trampled upon by the very government I served for 20 years. Knowing that men and women died serving this country…I see my fellow Americans being treated the way that they are, like I’ve been treated…I have a responsibility to my country and the people of this country to continue to uphold my oath until freedom is restored. That’s why I’m here.”

For the past several weeks, unarmed protectors have been repeatedly hit with mace and shot with rubber bullets and bean bags by North Dakota State Police Troopers and Dakota Access Pipeline Security. In response to the violence being supported by the government and pipeline company, nurses and others with medical backgrounds have organized a medic tent at the Standing Rock Camp to care for the injuries and ailments of protectors, often serving as protectors themselves.

“Of course the physical things get talked about—the pepper spray, rubber bullets, and bean bags. But the emotional and mental drama of this is very prevalent,” said a nurse from Georgia who is one of the medics from around the world who have formed the Standing Medic & Healer Council, in an interview with the Observer. “The historical trauma has been overwhelming, especially with the arrests that happened a few days ago, where there was an arrest of around 140 people. When we were arrested, we were taken and put in cages. We were numbered, and then we were put on buses without even being documented, and sent to a prison, where they didn’t know who we were or had our belongings with us. I was one of the people who was arrested, as a medic. I said to them as we were being transported ‘do you even get the historical consequences of your decisions today?’ We are keeping her anonymous as these nurses are risking their licenses through this volunteer work.

“I didn’t get a phone call the entire time I was there. We didn’t have our rights read to us until we saw the judge on the third day we were there and didn’t have our charges given to us until that third day as well. To say the whole experience was not just inhumane, but degrading, would be an understatement.”

What brought her here to Standing Rock was a moral calling coupled with a strong connection to the Lakota Tribe. “Of course we all believe that what is happening here is not just wrong but deplorable from a heart standpoint and a head standpoint, you can look at this and know it is wrong,” she said. “From a personal standpoint, I have a lot of respect and admiration for the Lakota people. I went through an experience a couple years ago with my dad, he passed away, and during the process of that my oldest brother and I went out to South Dakota where he lived. My family is Cherokee, and the Lakota out there who he became friends with, they were amazing to us and to him. They came to the hospital for us and did all the ceremonies and everything he needed so he could pass on in a good way. Ever since then there has been a special place in my heart for the Lakota, so coming out here to be a part of this with them and for them, it means the world to me.” 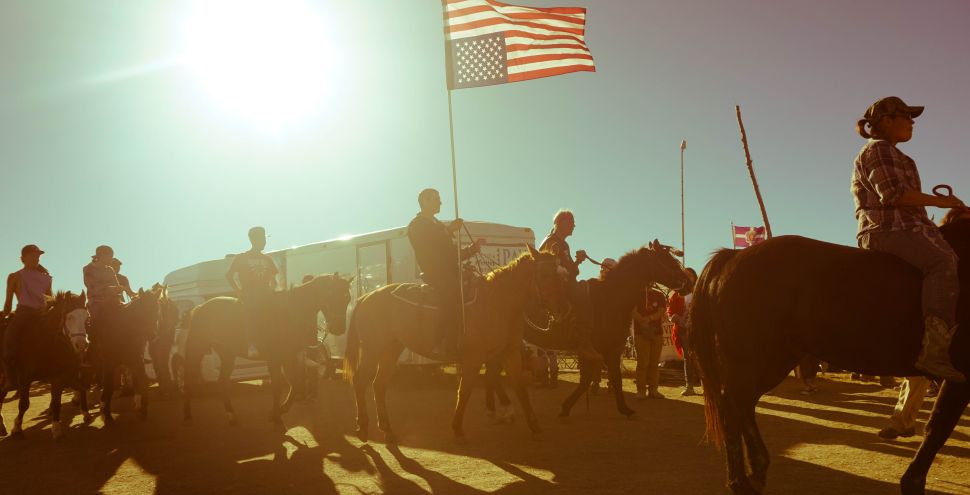