Elected officials and advocates from immigrant backgrounds are asking President Barack Obama to grant a presidential pardon to 800,000 youth currently residing in the country illegally—50,000 of whom are in New York—so as to solidify his legacy and counter President-elect Donald Trump‘s deportation plans.

In an interview with 60 Minutes on Sunday, Trump said that he plans to deport or incarcerate up to 3 million undocumented immigrants who he claimed are “criminal and have criminal records, gang members, drug dealers.” New York City elected officials and advocates believe Obama has the authority to issue pardons for the nearly 800,000 youth protected under his 2012 Deferred Action for Childhood Arrivals executive order that Trump has promised to repeal.

“Just recently in his meeting with President-Elect Trump, he said that he hoped that the next president would not undo the work and would not mistreat or abuse those that came forward through this program,” Bronx Assemblyman Marcos Crespo, the chairman of the New York State Assembly Puerto Rican/Hispanic Task Force, said on the steps of City Hall today. “What I want to say to President Obama is that hope should be the safety net only when no other recourse is available.”

DACA has granted work permits, driving privileges and prevented deportation of people brought into the country as minors/ Almost 50,000 of an estimated 250,000 eligible New York residents have enrolled in the program and could be left without any legal protections when Obama leaves office next month.

Crespo, who chairs the Bronx Democratic Party, added that while he is prepared to work with the Trump administration on compromise immigration policy. But he insisted the concerns people have given Trump’s rhetoric and actions before and after he won the election are “real” and “not unfounded.”

In particular, he lashed out at the selection of Stephen Bannon of Breitbart News as the new president’s chief political strategist and counsel. Bannon has promoted Breitbart as a “platform for the alt-right”—that is, a bastion of white nationalist thought.

“There’s two ways of judging people: by what they say and what they do,” Crespo said. “So we heard what then candidate Trump said and now we are just in the very beginnings of what he can do and what he’s already done is tap an individual to be his right-hand man in the White House, to help direct his policies—somebody who has direct ties to racist, misogynist, anti-Semitic, hateful white supremacists.”

A pardon, however, would not solve the status for some 10 million remaining undocumented immigrants.

Upper Manhattan State Senator-Elect Marisol Alcantara said that under the Obama administrations, more than 2 million undocumented immigrants have been deported, noting that he has deported more immigrants “than any other president in modern history.” She also said the United States’ foreign policies are what caused them to flee their countries in the first place.

Queens Assemblyman Francisco Moya spoke of undocumented immigrants in the military who he said proudly serve the country—he gave the example of his father, a Vietnam War veteran who immigrated from Ecuador and became a citizen not too long ago.

Moya is the chief sponsor of the DREAM Act, which would grant state tuition assistance to undocumented students. He noted that although the Assembly successfully passed the legislation, it has so far failed in the Republican-run State Senate.

“But we haven’t been able to do it in the Senate and we still have that opportunity to do it this year with the help of the governor of the state of New York, who has said that he is making this a priority.” Moya said. “We still do not give up that fight. We need the help of our president right now to step in and say, ‘Today is a day we will protect those young undocumented students.'”

Mayor Bill de Blasio, for his part, has said in the aftermath of Trump’s victory that New York City will remain a sanctuary city for undocumented immigrants and that the president-elect would face “a real fight” if he tried to access the files of the city’s municipal identification program, which is open to all city residents regardless of legal status. 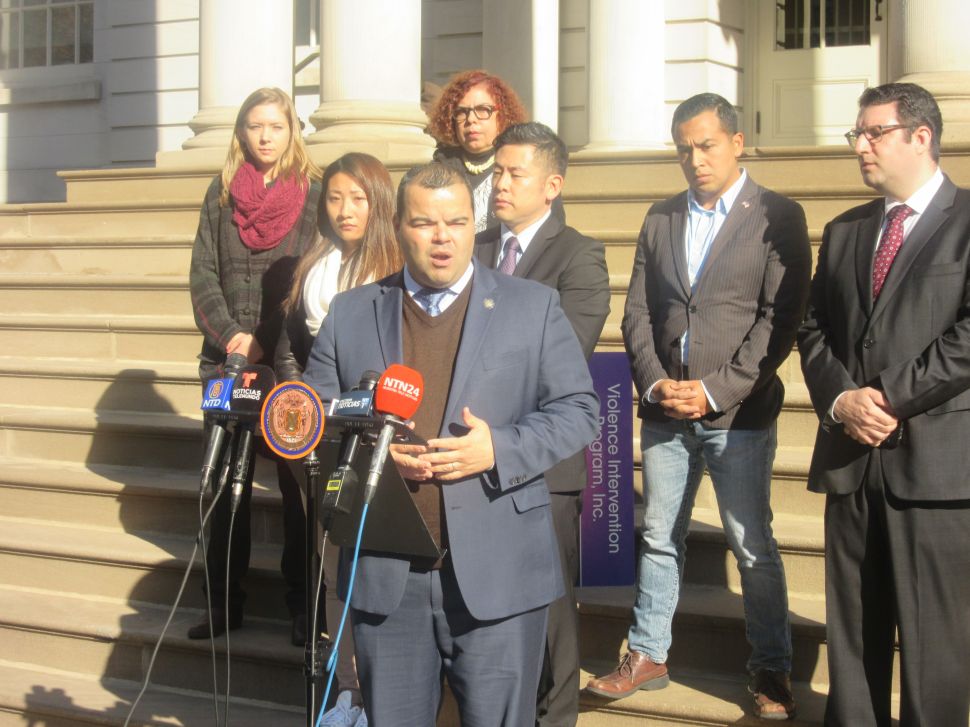