As presidential nominees Hillary Clinton and Donald Trump get ready to celebrate in New York City on Election Day—the first time two major party candidates have been in the city since 1944—Mayor Bill de Blasio and Police Commissioner James O’Neill say the city is fully equipped to deal with both ordinary voting issues and extraordinary security concerns.

Clinton will be hosting her event at the Jacob Javits Convention Center in Hell’s Kitchen at 6 p.m. while Trump will be partying at the New York Hilton Hotel in Midtown Manhattan at 6:30 p.m. The Democratic nominee had initially planned to host a fireworks display over the Hudson River but NYPD Chief of Intelligence Thomas Galati said that at this point, the fireworks are canceled for unknown reasons.

More than 5,000 uniformed officers will be assigned to various types of election duty throughout the day as well as the evening—the largest selection detail the NYPD has ever had and more than double its previous high.

“Let me note that tomorrow takes on a very special significance,” de Blasio, a Clinton booster, said outside the NYPD Substation in Times Square. “It’s been a tough election year, we all know this. It’s been in many ways a challenging and painful year. It’s strained our democracy. But tomorrow is the day when we get to make it ready—when the democratic process comes alive and the people choose.”

The mayor reported that the NYPD has both its “traditional extraordinary resources” and its new antiterrorism capacities such as the 500-plus member Critical Response Command and the Strategic Response Group. He also said the city has deepened its partnership with federal agencies over the last few years, referring to the aftermath of the Chelsea explosion in September as an example of it.

And he reiterated that the city is not going to be menaced by reports of possible terror threats, and repeated his assertion last week that the city won’t tolerate any voter suppression or electioneering at polling sites.

“I wanna be clear at the outset: New York City will never be intimidated, never by threats nor by anyone who wants to do anything to disrupt our electoral process,” de Blasio continued. “We’re focused on the big stage tomorrow night but we’re also focused on our poll sites all over the city during the day. We will not allow any form of voter intimidation.”

O’Neill said the NYPD and the U.S. Secret Service have been planning how to best protect the sites and the people inside them while minimizing the impact on vehicular and pedestrian traffic outside.

He noted that the department faced the largest security challenge it has ever had when Pope Francis visited the city during the United Nations General Assembly, where President Barack Obama and 90 percent of the world leaders were in attendance.

And he says fear not, he and other members of the NYPD will have time to vote.

“Of course, that’s our civic duty,” he said, garnering laughter from the audience.

“Tomorrow, we’re very confident that both events will go off without a hitch,” Beach said.

The NYPD’s Situation Room and the Joint Operation Center at One Police Plaza will be activated and staffed with representatives from more than 50 city, state and federal agencies who will coordinate operations throughout the day.

There are nearly 4.5 million registered voters in the city and the department said it anticipates a large turnout. Uniformed police officers will be assigned to each of the polling sites. Polls open at 6 a.m. and close at 9 p.m.

New York City Board of Elections staff, NYPD supervisors who have received instructions on Election Day materials and attorneys from the NYPD’s Legal Bureau will be available to assist officers. There will also be heavy weapons teams from the department’s Critical Response Command that consist of officers from the Emergency Services Unit and the Strategic Response Group, explosive-detecting canines and hundreds of police officers assigned to mobile field forces ready to respond to disruptions or demonstrations.

NYPD Transit Bureau officers will be riding the trains and there will be more bag checks as well as traffic agents performing traffic control duties. Street closures will also go into effect today and tomorrow on streets and avenues around the Javits Center, the Hilton Hotel, the Peninsula Hotel and Trump Tower—particularly when Trump is in the building. Truck restrictions will also be implemented.

The mayor attributed the fact that yesterday’s New York City Marathon ran smoothly as an indicator of NYPD preparedness. He also called for a moment of silence for NYPD Sergeant Paul Tuozzolo, who was killed last Friday afternoon in a shoot-out with an armed robbery suspect in the Bronx. 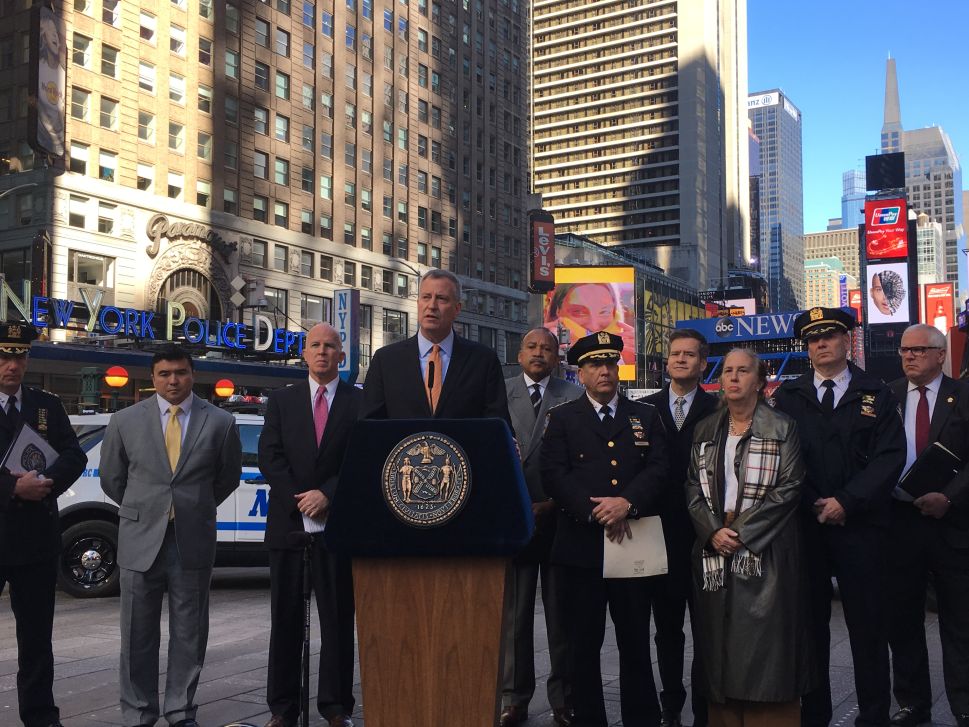