A day after another Wikileaks dump revealed an email in which Mayor Bill de Blasio told Hillary Clinton campaign chairman John Podesta that the Democratic nominee’s private speeches to financial firms are “hard to defend,” the liberal mayor insisted it is still his “absolute conviction” that Clinton will honor her progressive public stances.

Speaking in his weekly “Ask the Mayor” segment on WNYC on the final Friday before Election Day, de Blasio claimed there was no contradiction between his past public assertions that Clinton’s addresses to major financiers were irrelevant and his private admission to Podesta that they were problematic. In the March message, sent amid the fervent primary race between Clinton and leftist Vermont Sen. Bernie Sanders, de Blasio forwarded a City Limits article which quoted him defending the former secretary-of-states then-secret paid speeches.

“I’m trying, brother, but this one is hard to defend,” de Blasio wrote to Podesta, to whom he had repeatedly appealed for talking points about the former first lady.

The mayor maintained that he never found the speeches personally troubling, but only believed they created an optics problem.

“It’s a statement of fact. It was hard to defend. Obviously it was a controversial issue, and it got a lot of attention,” he said. “It’s understandable why the media and the people demand that certain information come forward.”

De Blasio himself has taken criticism for his own administration’s secrecy, for using an obscure legal statute to avoid disclosing the disciplinary records of NYPD officers, and for concealing emails between himself and political consultants whose clients often have business before the city.

Since the primary, Wikileaks has released excerpts of Clinton’s lectures, which contained little controversial or compromising. They did, however, depict her expressing more sympathy for the financial sector than in some of her more populist campaign .

Today, de Blasio again argued that the left-leaning Democratic party platform is more important than anything the nominee might have intimated to Wall Street titans.

“I believe it in my heart: her platform, what she’s committed to in the, in the, you know, cool light of day, that is what she will do. And she will be held accountable to the platform. That’s what matters. And the platform is the most progressive of any Democratic nominee in many decades,” he said. “That’s what matters. And my absolute conviction that Hillary will take on powerful interests, to do things like tax the wealthy and raise the minimum wage.”

Far more appalling, the mayor insisted, is Donald Trump’s decision to break with four decades of presidential tradition and refuse to release his tax returns. Numerous reports suggest the Queens-born businessman has likely avoided paying any tax at all for the past two decades, and that he may have financial ties to Eurasian oligarchs aligned with Russian President Vladimir Putin, who he has repeatedly praised.

“I think nothing compares to Donald Trump not releasing his tax returns,” said de Blasio.

The Clinton team has so far refused to verify the authenticity of any of the Wikileaks dumps, but only pointed to the electronic trail linking them to the Russian government. 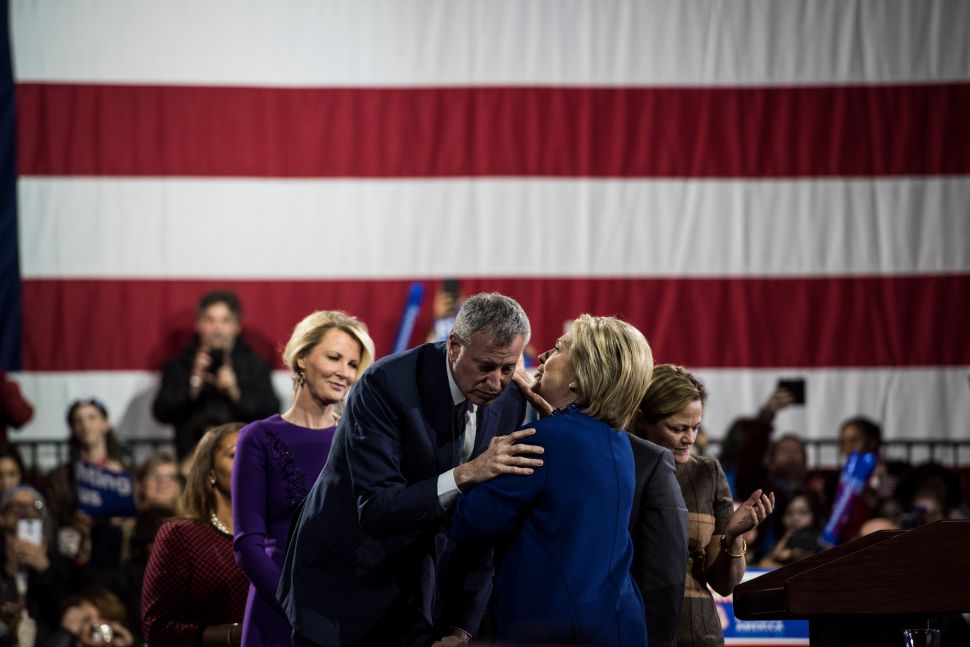