Mayor Bill de Blasio is confident the city has a “very, very strong case” for the federal government to reimburse the costs that will come with providing additional security at Trump Tower after President-elect Donald Trump’s victory.

The liberal Democratic mayor revealed today that the NYPD has so far put nearly 50 traffic agents and police officers on each shift to oversee traffic flow from 53rd to 57th Streets between Fifth and Madison avenues surrounding Trump Tower. The mayor said he expects that the federal government will understand the substantial resources the city is and will be using to protect the president-elect and area residents and businesses—a situation he says “this city has never been faced with before.”

“I think we have a very, very strong case for reimbursement, very substantial reimbursement,” de Blasio, a Hillary Clinton supporter, said at a press conference at the NYPD headquarters this afternoon. “Again—because I’m not an expert on the chapter verse—but we know for a fact whether it was protecting foreign leaders or protecting presidents of the United States, there has been a history of reimbursement under certain situations. This makes all of them look quite small, obviously.“

Conversations with the federal government will begin “in earnest soon,” he said. De Blasio asserted the unique security scenario will require new city and federal models, and  said he will “certainly” be talking with the Obama administration about refunds as well with Trump.

But he did not do so during his hour-long meeting with the president-elect on Wednesday.

“I did not raise this specific issue to the president-elect but I’m sure in a subsequent conversation, there will be an opportunity to do that,” de Blasio continued. “And I’ll certainly be talking to members of his team about it in the mean time.”

When a reporter asked the mayor if he is concerned that Trump won’t reimburse the NYPD, given his history of not paying contractors, de Blasio said he’s not worried—calling public service a “whole new reality” from construction. He added that the federal government has a history of providing reimbursement to New York City.

“I don’t know if I can think of any other situation with any other president in any other city that’s something of this complexity and intensity happening before,” de Blasio said. “So I think this rises above partisanship.”

More than 5,000 uniformed officers were assigned to various security duties on Election Day—the largest selection detail the NYPD ever had, the consequence of both Clinton and Trump holding their parties in Manhattan. Police Commissioner James O’Neill, for his part, would not weigh in on overtime costs but said that the NYPD is commitment to keeping Trump and his family as well as surrounding residents and businesses safe.

He alluded to the 1,300 cops the mayor and City Council budgeted last year,  which he said will help the department deal with the security challenges surrounding Trump Tower.

“There have been times in the past that we have been reimbursed,” O’Neill said. “I’m not going to go into when and what time that was but there has been reimbursement and it’s something that—it’s important for us this time that the federal government considering that again this is a substantial number of resources that we’re using.” 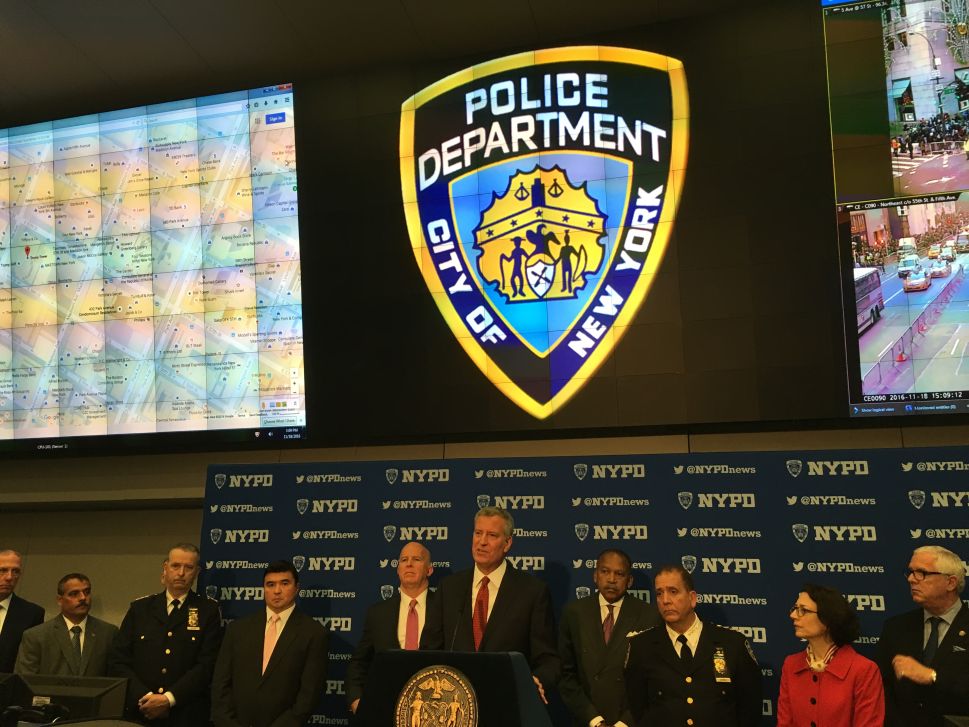