WEST LONG BRANCH — The race may not be competitive, but that neither longtime Congressman Frank Pallone nor his Republican challenger Brent Sonnek-Schmelz held back during Wednesday’s congressional debate at Monmouth University. The exchanges between Sonnek-Schmelz and Pallone saw the young Republican casting the congressman as an insider unfit for correcting what he characterized as a culture of dysfunction in the House.

Sonnek-Schmelz took an unexpected tack in his responses to voters’ questions, invoking policy positions on reigning in student debt, overturning the U.S. Supreme Court’s Citizens United ruling, and safeguarding the legislative process against special interests. Though Sonnek-Schmelz often took those attempts at bringing in Democrats who voted for Bernie Sanders in the primary along with certain Trump Republicans local, Pallone was nonplussed.

“They’re unhappy with how congress has forgotten what the people need,” Sonnek-Schmelz said of his supporters. “We have a broken and corrupt system. Now I’m not saying that Congressman Pallone is corrupt, but he’s a creature of that environment. And if you need something done, I’m not sure that he’s the right way to go.

“Where was he on Fort Monmouth, which is now a black hole sitting in the middle of the district where we lost tens of thousands of jobs and lost billions in income? Where was he on Sandy, where we’ve had a loss of tons of houses, where FEMA bureaucrats have been corrupt and stolen from the victims?”

Sonnek-Schmelz pledged, at one point, to be “the most aggressive Republican there is on climate change.”

Pallone deflected those criticisms by pointing to his role in passing the Affordable Care Act, which Sonnek-Schmelz favors rolling back.

“I guess I should mention that everything that I’ve been mentioning tonight, I guess with the possible exception of the Affordable Care Act, was really done on a bipartisan basis. When Brent says that congress doesn’t work and althea do is fight, it’s really not true.”

Sonnek-Schmelz also challenged the congressman on what he described as the House’s inaction on the misdeeds of influential companies in industries like health care, pointing to the case of EpiPen manufacturer Mylan.

“I can’t let him get away with this Mylan thing,” Pallone responded. “If you call the fact that I and Senator Widen actually caught Mylan cheating Medicare to the tune of hundreds of millions of dollars, and Mylan then settled and now has to repay the government something like $300 or $400 million because of my and Senator Widen’s efforts, I don’t consider that a ‘little bit’ of going after them.”

Late in the debate, Pallone’s Republican opponent acknowledged his long odds against the congressman.

“That puts me at a distinct disadvantage,” he said of his nearly 75-1 fundraising disadvantage. “I understand that. I also look at where the money comes from. I look at a lot of congressmen such as Frank Pallone and others, that they seem like they’re more elected lobbyists than advocates for their district.” 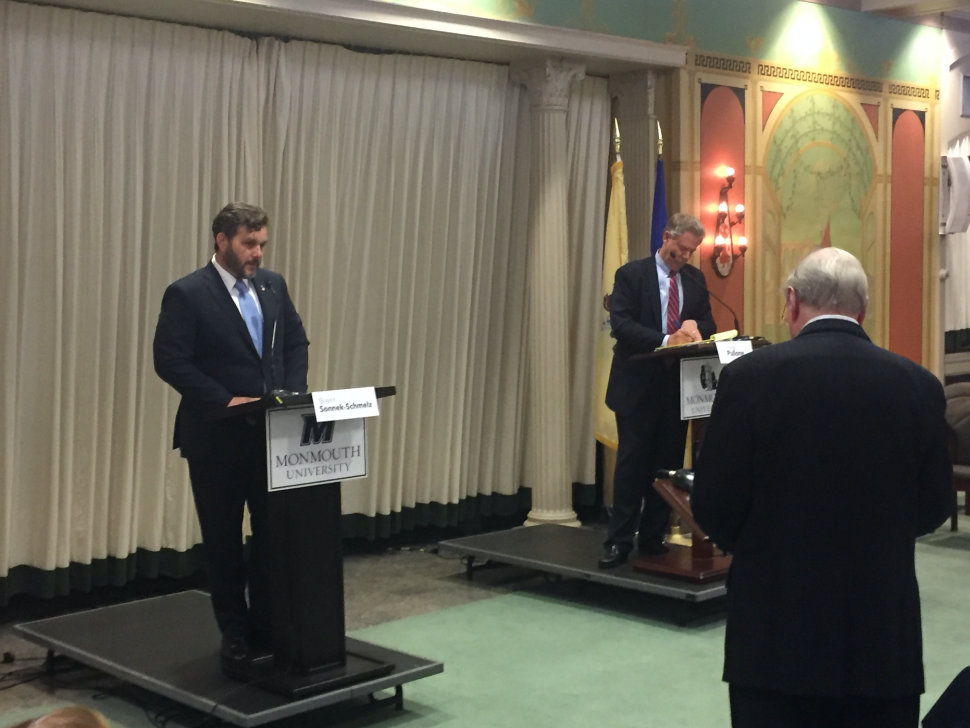