Now that Donald Trump captured the White House, media personalities should stop hoodwinking readers and viewers by pretending that their baseless speculation and fear-mongering is actual journalism.

One of the unique privileges of being a journalist is that other than knowingly publishing false and malicious statements, you can do just about anything else without consequences—like, per New York magazine writer Gabe Sherman, keep your own editors plus readers in the dark about negotiating for a paid gig with an organization they trust you to cover objectively.

But at least Sherman wrote some meaningful stories about his paymasters’ key adversary while he did their bidding. Not so journalists who shamelessly shilled for Hillary Clinton at the expense of their own readers and viewers during the election.

Huffington Post and their fellow travelers first assured everybody Trump was not a serious candidate, then said although clearly seeking the nomination he would never get it, then when he got it guaranteed everybody he would not win.

HuffPost Washington bureau chief Ryan Grim, who made the prescient decision to put Trump in the entertainment section last year, assured everybody Trump would lose. He even accused respected polling analyst Nate Silver of “monkeying around” with the numbers in a “disingenuous” effort to skew the results for Trump.

New York Times reporter Michael Barbaro asserted in the lead election story that Trump won because his voters were losers.

The oracle wrote on Saturday, November 5, “HuffPost Pollster is giving Clinton a 98 percent chance of winning, and The New York Times’ model at The Upshot puts her chances at 85 percent.”

It became pretty obvious well before midnight Tuesday that Grim and his cohorts blew the call—big time.

But instead of admitting their failings, let alone apologizing, they scurried to scapegoat and slime millions of Americans who made an informed decision to support Trump and reject his scandal-plagued and charmless opponent.

New York Times reporter Michael Barbaro asserted in the lead election story that Trump won because his voters were losers.

“He seemed to embody the success and grandeur that so many of his followers felt was missing from their own lives — and from the country itself.”

They did? Says who?  How did that sentence get past an editor?  How does Barbaro know so well what “many” of Trump’s followers were thinking?  Nothing on Google indicates he has interviewed many or any of them. The reality is that, like any voting bloc, they were diverse ideologically and personally.

Barbaro, whose objectivity was even questioned recently by Dan Abram’s left-liberal Mediaite, hung up immediately when asked to substantiate his assertions.

The next day  MSNBC contributor and Washington Post opinion writer Jonathan Capehart managed to outdo Barbaro’s slime in the course of scapegoating and caricaturing Trump voters as he misled readers and viewers who trust him to provide the inside scoop.

Capehart’s unrepentant post-election article insisted Trump won by political “fracking” that “pumped a well of discontent with a combination of populist, xenophobic and racist messaging to motivate those voters to the polls.”

Remember who won the election in 2012? If voters are so intrinsically racist why didn’t Mitt Romney, a skillful politician, scoop them up when he ran against a black guy?

How does Capehart even know what motivated Trump’s supporters? Has he ever talked to a single one of them? Or even read the stuff that his own paper has published.

WaPo reporter Jenna Johnson, strange as it may seem, actually left her computer to find out what Trump supporters are all about. Her nuanced and extensively reported portraits entirely contradicts the racial McCarthyism Capehart attributed to them.

Even one of Hillary’s own voters, a Baptist minister using the Twitter handle @JoetheBaptist, blasted Capehart for trying to scapegoat Trump voters to cover-up for his own monstrous political stupidity. Namely supporting the former Secretary of State in the primary contest despite her obvious liabilities.

Around the same time Capehart appeared on MSNBC. Instead of asking the kind of skeptical questions that the Baptist minister posed to Capehart, the host, who theoretically gets paid to do what the rev offered up free of charge, just gushed over him.

“You’ve been covering this election,” she said. “Donald Trump himself said he was surprised when he won the nomination and winning the actual presidency, the fact he has no experience governing.”

Actually, Capehart was not “covering” the election—although folks unfamiliar with his bio wouldn’t know that. He is an opinion writer. He rarely does reporting for his pieces.

But like any good Ponzi Scheme ringleader Capehart leveraged one falsehood into a bigger and more self-serving one.

“Right,” Capehart responded. “This should be in a healthy sense the most frightening meeting he should ever have,” said the scribe, referring to the pending meeting between President Obama and President-Elect Trump.

Let’s see how much ignorance about the American people and, ironically, even Obama, Capehart packed into that one sneering sentence—especially in light of how the meeting actually went down.

For starters, by any objective standard and for anybody who even has a minimal understanding of what Obama is all about there was good reason to suspect the meeting would be one of his most inspiring.

The traditional meeting between the President and his successor just selected in in a free and fair election is a cornerstone of American democracy—the first step of a peaceful transition of power.

That is a strikingly presumptuous thing to say about somebody who has made a career of his stated desire to bridge traditional ideological and political divides for the good of the country. It also pre-supposed that Obama, who had never before met Trump, was some kind of simpleton, bereft of any curiosity.

Wouldn’t Obama of all people understand that public figures are often far more complex than their public image suggests?

Secondly, Trump was famously non-confrontational when he finally came face to face with the president of Mexico. So it would have been perfectly reasonable to assume he wouldn’t be belligerent when actually in the same room with Obama. Especially because Trump is charismatic but Hillary, of course, by Obama’s own words is not very likeable.

What exactly did Capehart think Trump would find so frightening?

Instead, just like Tuesday night, pretty the exact opposite of what Capehart and his fellow travelers assured everybody would happen actually occurred.

Although the meeting was only expected to last 10 minutes, Trump and Obama emerged an hour and a half later.

Quite a schmooze-fest for somebody Capehart implied would be in terror over the very presence of Trump.

“My No. 1 priority in the next two months is to try to facilitate a transition that ensures our President-elect is successful,” Obama said with his successor in an Oval Office photo shoot.

“If you succeed the country succeeds,” he told Trump.

Capehart, contradicting his own paper’s reporting, proceeds to say Trump won because his voters were a bunch of bigots.

“Mr. President, it was a great honor being with you and I look forward to being with you many, many more times,” Trump responded. He promised to seek “counsel” from Obama, calling him “a very good man” to reporters.

In a telephone interview, “Joe the Baptist,” who voted for Hillary but supported Bernie Sanders in the primaries, offered the kind of sophisticated critique of Trump supporters that journalists are theoretically paid to provide. Joe the Baptist (his Twitter handle) resented that some voters who chose the future White House occupant were characterized as “white evangelicals.”

Joe didn’t call them racists or even racially noxious. He simply said that their support for Trump contravened Christian teaching as best as he could interpret it.

Capehart blocked this columnist on Twitter in 2013 when asked about the racial purge lawsuit against the WaPo advertising department.

But even a veteran Washington civil rights lawyer, let’s call him Serpico” found Capehart’s column rather puerile and inane—particularly his speculation that Trump was going to unleash a reign of terror on his critics.

“The frightening thing about Trump is that he has a penchant for retribution,” Capehart wrote.

To “prove” his point Capehart cited a “campaign aide, Omarosa Manigault, [who] told the Independent Journal Review, ‘It’s so great our enemies are making themselves clear so that when we get into the White House, we know where we stand.’ And she added this: ‘Mr. Trump has a long memory and we’re keeping a list.’”

So welcome to the inverto media universe of the new Trump era.

The lead New York Times story on his election featured sociological musings that probably could not even be published by a peer-reviewed left-wing sociology journal, which, of course, requires footnotes and sources.

Capehart, contradicting his own paper’s reporting, proceeds to say Trump won because his voters were a bunch of bigots. His MSNBC interviewer not only doesn’t challenge him on that or ask for evidence but uses the column and his “reporting” to bolster his own credibility.

Capehart, on MSNBC, then assures viewers that Obama might shrivel from sheer fright when he finally comes face to face with the crypto-fascist who leveraged deeply-rooted racism in this country to defeat such an obviously charming and trustworthy candidate. Even though Obama famously said in the 2008 Democratic primaries that Hillary is not very likeable.

Nothing online indicates any these journalists were asked to defend their slop or sharply criticized by their fellow-travelers.

Conclusion: folks who want predictions about the country under Trump should just pay Tarot cards. Unlike buying newspapers or online access, if you end up feeling hoodwinked it is at least theoretically possible to get your money back. 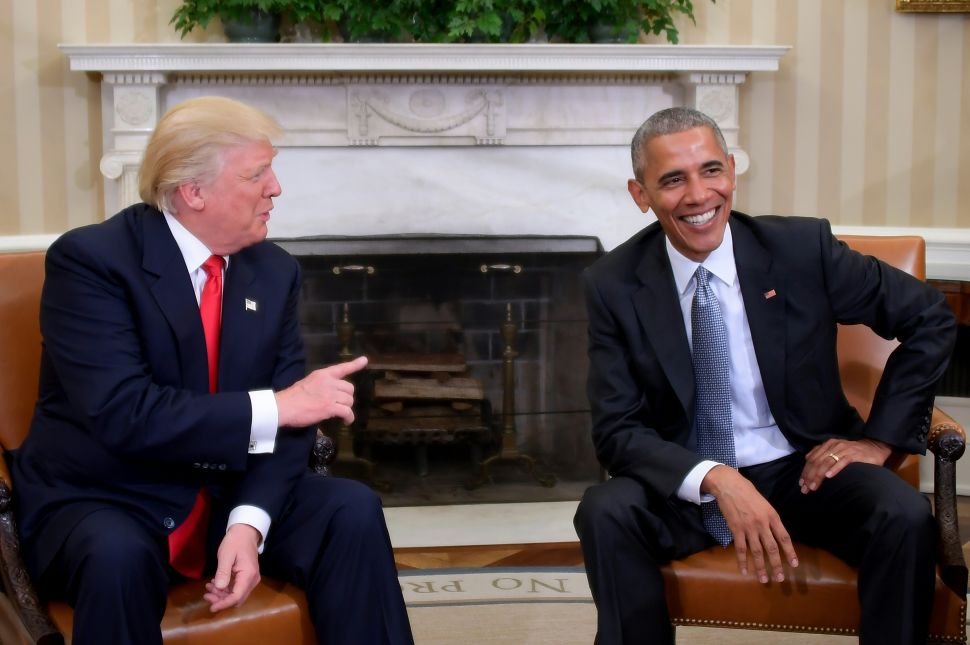