The nonstop, week-long art party that is Art Basel Miami Beach has finally arrived, thus beginning the annual scramble to stretch our social calendars to the limit. The art world’s version of spring break comes packed with more art fairs, brunches, lunches, dinners, parties, after parties, cocktails and secret hangouts than is humanly possible for one person to attend—and score invitations to. However, it’s fun to try!

Architectural Digest & Art Production Fund 2017 Artist Towel Series at Delano Beach Club, 6-10 p.m.
If you are a VIP guest staying at the Delano this week you’ll come away with the hottest swag in town for free at this Basel kick-off party: limited edition beach towels designed by artists John Currin and Laurie Simmons. And if you aren’t a VIP, that’s OK too—you can still nab a towel at the hotel’s gift shop for $95 a pop.

Unveiling of Sun Xun’s Reconstruction of the Universe for Audemars Piguet, Miami Beach Drive between 21st and 22nd Streets, 6 p.m.
When the sun goes down on Tuesday eventing, the lights will go up on Chinese artist Sun Xun’s ambitious immersive installation across from Collins Park. The bamboo structure is promised to span a city block and will feature 2-D and 3-D animations, as well as traditional scroll paintings and ink drawings.

Thomas Bayrle’s “One Day on Success Street” VIP Preview, ICA Miami at the Moore Building, 7 p.m.
For this massive survey, which features over 150 works, the German artist has created his first ever large-scale steel sculpture inside the museum’s four-story atrium.

“Desire” curated by Diana Widmaier-Picasso, presented by Larry Gagosian and Jeffrey Deitch, at the Moore Building
It’s Miami Art Week, and so an exhibition about “modern and contemporary approaches to eroticism in art,” seems more than appropriate. Deitch and Go-go are teaming up for yet another pop-up show (last year they mounted “Unrealism” in the same gallery) running concurrently with Art Basel Miami Beach. This one will feature over 50 artists, including Harmony Korine, Jordan Wolfson, Jeff Koons, Kenny Scharf, Nan Goldin, Vanessa Beecroft and the list goes on practically forever.

Hester Street Fair Pop-up Gift Shop at the Deauville Beach Resort, 5-7 p.m.
Conveniently, Art Basel occurs just a few weeks before Christmas, which makes it the perfect time to stock up on gifts for your loved ones. The Lower East Side’s Hester Street Fair has long been a go-to for purveyors of unique foods, clothing and gift items, and organizers are planning the first ever Miami pop-up with items from Jimmy Lion, Shelter Serra, Print All Over Me and many more.

Wolfsonian’s Art Basel Miami Beach VIP Party at 1001 Washington Avenue, 8-11 p.m.
The Wolfsonian has tapped Michael Arenella and His Dreamland Orchestra, who are known for bringing the tunes of the 1920s to Governors Island’s Jazz Age Lawn Party each year, for VIP cocktails and some late night swing dancing.

MoMA PS1 Pool Party with Hood by Air and Jacolby Satterwhite at FDR Lounge, 8 p.m., followed by Cool Down, 11 p.m.-Close
The event invite for MoMA PS1’s Friday night Cool Down party hosted by artist Jacolby Satterwhite at the Delano Beach Club warns “Doorman Discretion” for entry. This will be a can’t-miss party considering that Hood by Air will unveiling their latest collaboration with photographer Pieter Hugo in addition to DJing poolside.

Madonna’s Raising Malawi Benefit Auction at the Faena Forum
Madonna will be dressing up as a clown and singing for guests who can nab a coveted $5,000 ticket to this special Basel edition of her “Tears of a Clown” performance. Late Late Show host James Corden will MC the star-studded event, Alexander Gilkes will oversee an auction, and Sean Penn, Chris Rock and Ariana Grande will join the fun.

All Day I Dream Art Basel Edition with Lee Burridge, Gorje Hewek & Izhevski and Ooa Dahl, Secret Island Location, 2-10 p.m.
Who can resist a party on a secret island? House music producer Lee Burridge’s roving party, known as All Day I Dream, is swinging through Miami for a tropical day-to-night party to round out the weekend.

Kehinde Wiley’s Southern Fish Fry with Lauryn Hill, the Miami Beach Edition, 5-9 p.m.
As the Basel bacchanalia winds down join artist Kehinde Wiley at the Edition for a menu of fried seafood and a performance by Lauren Hill. Until next year fairgoers! 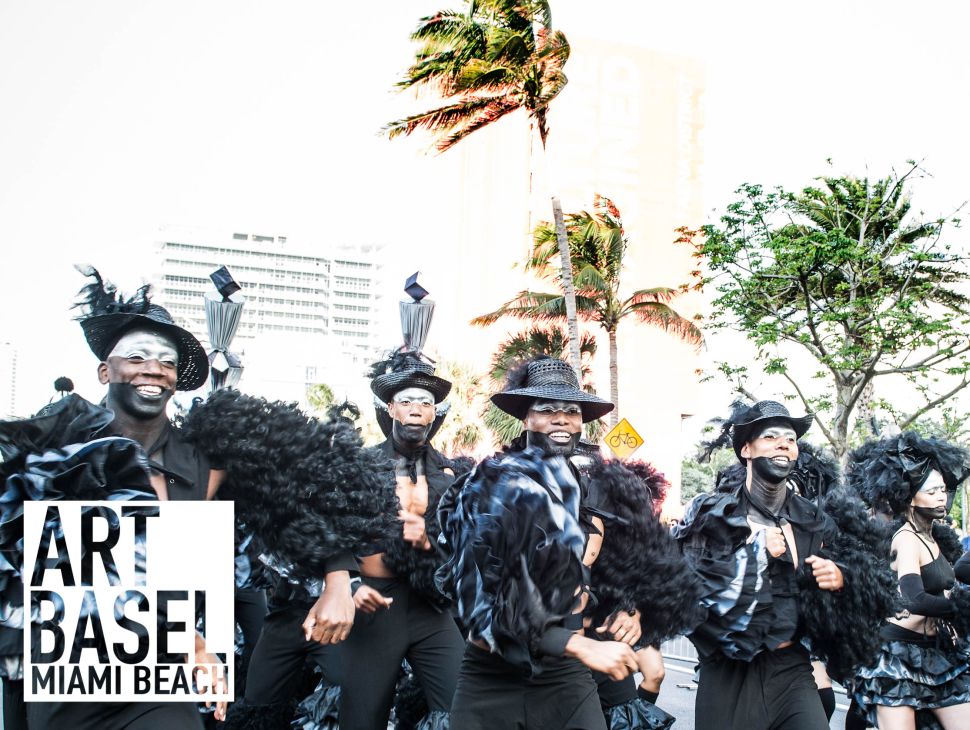