The poll of 1,138 city residents found 49 percent of respondents do not believe the mayor has earned four more years, compared with 39 percent who do. But his 63 percent approval rating among Democrats—77 percent among African-Americans—for now appears to insulate him against the threat of a primary challenge

“At this early stage, only a general election challenge looks to be potential political trouble for the mayor,” pollster Maurice Carroll said in a press release. “The city’s black community loves him, as has been the case since day one, and that big support gives him a commanding edge in a Democratic primary.”

In an improbable five-way primary, the survey found de Blasio would pull 34% vote, 19 points ahead of Quinn, his nearest rival—which would fall short of the 40 percent needed to avoid a run-off. But one-on-one, the incumbent would cream the former Council leader 55 percent to 29 percent among Democrats.

The others fare even worse. Stringer—whom Bradley Tusk, former Mayor Michael Bloomberg’s campaign manager has sought to draft to take down de Blasio—would get just 24 percent of the Democratic vote compared to de Blasio’s 58 percent.

Diaz Jr. and Adams would draw 23 percent and 21 percent, respectively. Each would fare somewhat better in the unlikely event they ran against him as an independent in a general election, with Quinn scraping closest with 35 percent to de Blasio’s 41 percent.

“Former City Council Speaker Christine Quinn, a big loser to Mayor Bill de Blasio four years ago, is the only city politician who gives him a run in the new Quinnipiac University poll, a benchmark measure as the reelection year begins,” said Carroll.

Quinn appears by far the best-known of his potential opponents, with only 43 percent of respondents saying they “haven’t heard enough” about her to form an opinion. But she also has by far the highest unfavorability rating of the prospective challengers: 20 percent among the general populace and 17 percent among Democrats.

De Blasio has a 44 percent unfavorability rating in general, and 30 percent among Democrats.

Those polled indicated overwhelmingly they don’t know much about Adams, Diaz Jr. or Stringer—74 percent, 72 percent and 63 percent saying they “haven’t heard enough” about each man to decide whether they like him.

The mayor’s campaign team brushed off the results, and rattled off a list of the mayor’s signature initiatives: a decrease in the NYPD’s use of stop-and-frisk, a rent-freeze in regulated apartments, higher wages for city employees and universal prekindergarten.

“The mayor is fighting every day to make our city stronger and fairer for every community, and we are happy to compare his record against anyone,” said spokesman Phil Walzak.

Quinn, a rival to de Blasio dating back to their competing bids for Council speaker in 2005, was at first the frontrunner in the Democratic primary. But outrage over her closeness to Bloomberg, her support for extending term-limits in 2009, the dramatic rise and fall of former Congressman Anthony Weiner and a concerted negative campaign by the anti-horse carriage group New Yorkers for Clean Livable and Safe Streets crushed her campaign. A federal probe into de Blasio’s relationship with NYCLASS is ongoing.

Quinn has since worked for Gov. Andrew Cuomo, then for homeless shelter operator Women in Need. working with de Blasio’s administration in the latter capacity. More recently, though, she has grown critical of the mayor’s handling of the indigent crisis.

Cuomo, de Blasio’s biggest rival of all, has the highest approval rating of any figure Quinnipiac University asked about—65 percent. 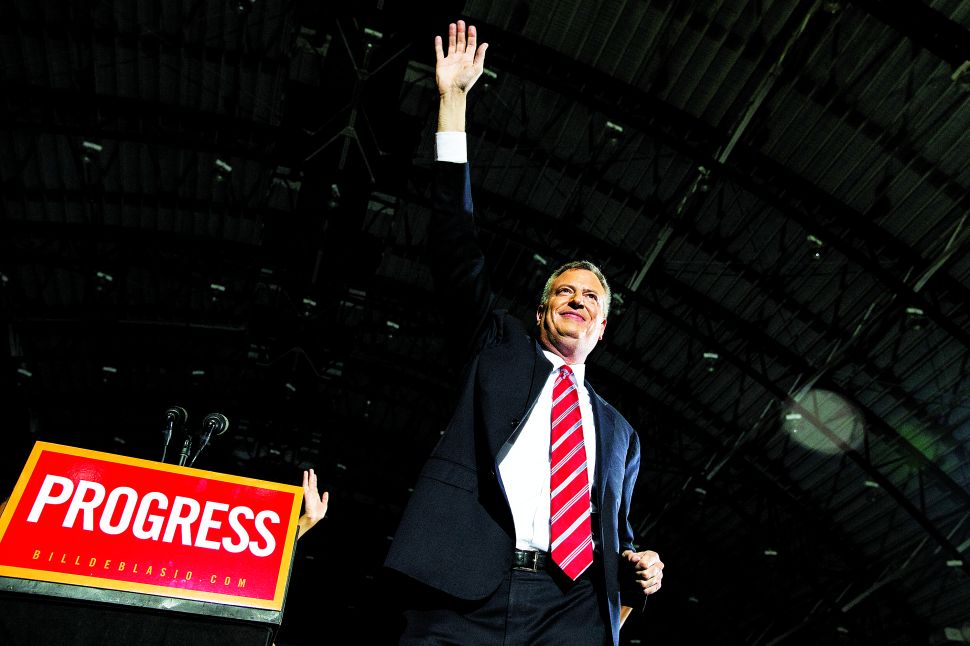