Long Island Republican Congressman Lee Zeldin defended his support for his party’s nominee today by lashing out at what he alleged were illegal dealings between the Clinton Foundation and the State Department under Hillary Clinton.

Confronted in an interview with radio host Brian Lehrer with Donald Trump’s history of erratic behavior and derogatory comments about women and minorities, the Suffolk County congressman described presidential contest as a battle between “two flawed, imperfect candidates.” But he insisted his support for Trump was justified because of the controversy swirling around the Clinton family charity, which accepted donations from terror-funding nations like Saudi Arabia and Qatar—nations whose diplomats sought, and at times obtained, meetings with Clinton, her husband and national security officials during her four-year tenure as secretary of state.

“I have huge issues with what I believe is the largest white collar crime that’s taking place in this country,” said Zeldin, who defeated incumbent Democrat Tim Bishop in 2014. “That Hillary Clinton can be president of the United States and a Saudi prince can donate $10 or $15 million dollars, let’s say, to the Clinton Foundation and then have access for meetings and policy with the U.S. government, that is something that is very important to me.”

Saudi Arabia, a repressive theocratic monarchy, is a longtime U.S. ally whose oil-fueled aristocracy has encouraged violent Islamic fundamentalism abroad. Saudi officials have given as much as $25 million to the Clinton Foundation since its creation in 1997, and the State Department authorized the sale of advanced military aircraft to the country in 2011—two years before Clinton left the agency.

No link between the contributions and the weaponry deal has ever been established. When Clinton assumed her role in the Obama administration, she had no official position in the Clinton Foundation, and the organization agreed to begin revealing its donors.

This, for Zeldin, would not be enough should Clinton become president.

“I believe it’s a massive error in judgement not to be making a decision and having it announced that the Clinton Foundation would not be operating the way it’s been operating when she was in charge of the State Department,” he said today.

The Clinton Foundation also accepted money from democratic countries like Australia and the Netherlands, and from Trump’s own foundation, money it funneled into international AIDS relief and other causes. The foundation has received international acclaim for much of its work, but also criticism for underwhelming initiatives in Haiti in the aftermath of the 2010 earthquake there, including a lime-growing program that may have benefited a donor.

The Federal Bureau of Investigation began a probe into potential conflicts of interest involving the foundation last year—an investigation that provoked considerable dissension and strife within the FBI, according to the Wall Street Journal. There have been no formal accusations of malfeasance, the the group has denied allegations of wrongdoing.

Zeldin also criticized what he claimed was Clinton’s preference for “activist” Supreme Court justices. But he ultimately appeared to allow for compromise in the likely event of her assuming the Oval Office.

“Again, two flawed, imperfect candidates,” the congressman, who endorsed Trump in May, repeated. “I’m willing to work with anyone to move this country forward.”

The Clinton campaign did not immediately respond to requests for comment.

New York GOP leaders view Zeldin, an Iraq war veteran and the sole Jewish Republican currently serving in Congress, as one of their finest rising talents in a predominantly blue state. At present, he leads his Clinton-backing Democratic challenger, Southhampton Town Supervisor Anna Throne-Holst, in the polls. 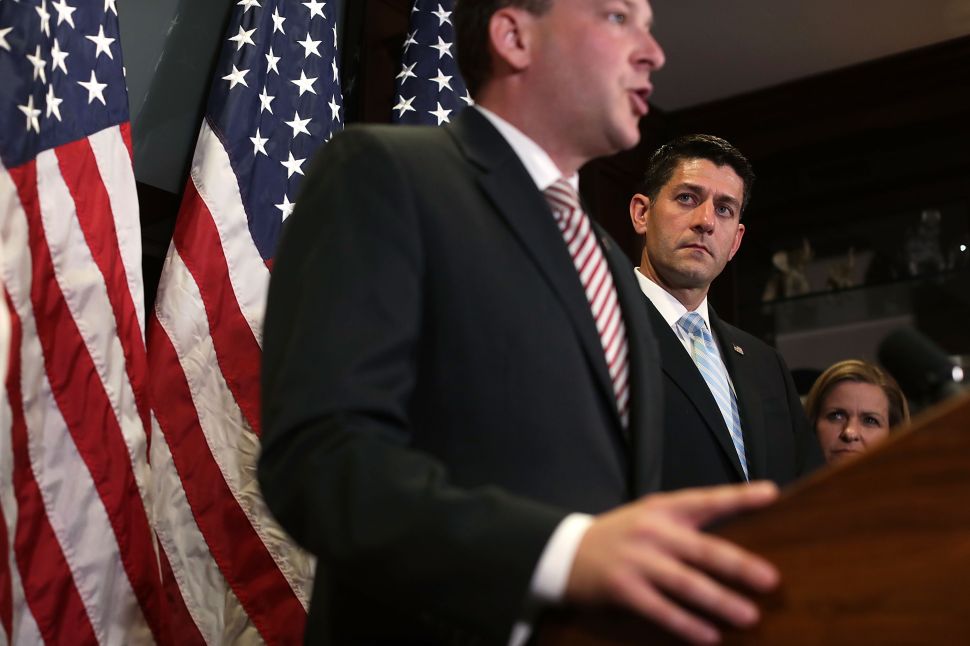