Most of New York’s Democrats are panicking over the potential impact of President-elect Donald Trump’s policies on the city’s immigrant communities—but not the breakaway, Republican-aligned Independent Democratic Conference, who said today they believe the State Senate GOP will work with them to combat bias and hate.

Trump has said that he plans to deport up to 3 million undocumented immigrants who he says have criminal records, and study the possibility of removing even more. But Brooklyn State Senator Jesse Hamilton—who announced earlier this month that he would leave the mainstream Democratic caucus to become the renegade group’s seventh member—said that he personally believes that the IDC can work with Senate Republicans to preserve immigrants’ rights.

“This is my first term as far as being a senator and I can only speak for myself, I can’t speak for the Senate Republicans but I do hope that they will work with us to make sure that immigrants’ rights are protected in this state,” Hamilton said at a joint press conference with Rev. Al Sharpton’s National Action Networks. “So I’m hopeful in that and I believe that we’re working together to making that happen.”

And when another reporter asked whether Senate Republicans’ attitude will change now that Trump is president, he said he hopes they can all unite to solve the problem.

“We’re all immigrants and I can’t talk for them but I just hope that we can work together for the betterment of the state,” Hamilton continued.

IDC Leader Jeffrey Klein of the Bronx boasted that his splinter caucus was able to secure $250,000 for the Vera Institute of Justice’s New York Immigrant Family Unity Project to provide public defenders for individuals facing deportation with the help of the Republican majority in the Senate. At the press conference this morning, they called for $4 million in to meet the remaining statewide need.

“I got this money in the budget last year to the tune of $250,000 with a Republican-controlled Senate so I’m very hopeful that we can continue pushing once again to make sure that we can get the full amount of money to the effect of covering all areas of New York City,” he said.

The large number of deportations under President Barack Obama’s administration and Trump’s rhetoric illustrate the need for such funding, he asserted.

“We also have to remember, you know, that this money was needed during the prior administration,” Klein added. “Unfortunately, President Obama did deport an awful lot of people to the tune of $2 million so that money was needed and again, I believe right now that it’s probably needed even more under this present administration and that’s why we’re here fighting for that.”

Established in 2010, the IDC struck a deal in 2012 with the then-minority State Senate Republicans that enabled them to jointly run the body. After the GOP regained a numerical majority in the 2014 elections, they changed the arrangement whereby Bronx State Senator Jeffrey Klein kept his title of “co-leader” but lost much of his power over legislation and the chamber’s internal operations.

The exact balance of the body in the coming two years remains unresolved pending a pair of recounts on Long Island. But it seems all but certain that Republicans will again predominate, and Klein has hinted he attends to align with them again.

Mike Murphy, a spokesman for the Senate Democratic Conference, warned that the impending Trump presidency and “hostile anti-immigrant Republican agenda” make it more critical than ever for all Senate Democrats to work together to combat what called the “extreme GOP agenda.” He highlighted that the State Senate GOP has vocally and vehemently opposed the DREAM Act, which would grant state tuition assistance to undocumented college students.

“Senate Republicans are clear in their anti-immigrant policies,” Murphy said in an emailed statement. “Democrats must not give Trump Republicans cover or a free pass.”

“The purpose of having a coalition is so that some can be diplomatic and others of us can be more direct,” Foy said, garnering laughter from elected officials and advocates in attendance. “It would be in the best interest of the Republicans in the state of New York to not go against the will of New York and follow president-elect down a dark path.”

Klein insisted that he that he and the rest of the IDC support the DREAM Act, and asserted his caucus is not the primary obstacle to the law’s passage. The only two Democrats to vote against the bill when it came up in the State Senate were Brooklyn State Senator Simcha Felder—a conservative who has sat with the GOP since his election in 2012—and Rochester State Senator Ted O’Brien, a member of the larger party conference.

“I don’t want to reinvent history but when the bill was put on the floor by myself, we had two Democrats that voted no even though there were 32 duly elected Democrats in the State Senate,” Klein said. “So I don’t know if that’s changed, I don’t know if we can build a further coalition but I will say that is gonna be one of the top priorities of the IDC.”

Kirsten John Foy of the National Action Network warned Republicans today to “do what’s best”—or face protesters camping outside their offices and homes. 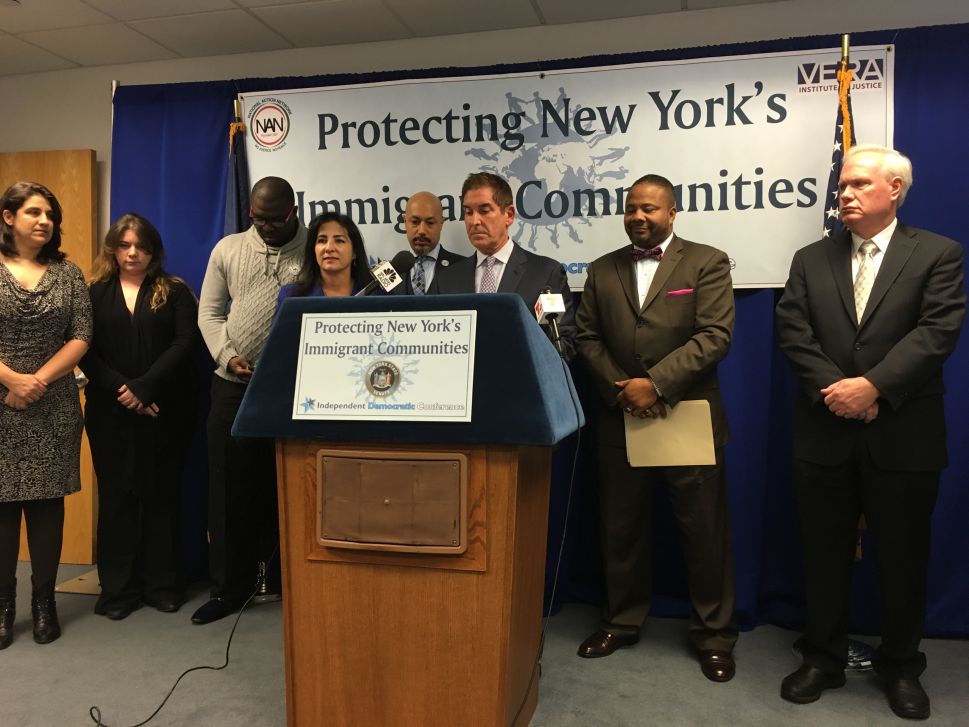