The great Leon Russell died in his sleep over the weekend at 74—and who among us will remember his music? The seasoned session pianist-turned-bandleader-turned solo artist, champion of the Tulsa sound, top-hat-wearing, country-fried Master of Time and Space will always be remembered by those who shared a stage with him. Leon Russell was a true musician’s musician.

But while Leonard Cohen’s music spoke of love, sex and death, while Phife Dawg‘s flow pulsated with timely political resonance, while Prince’s meditations on sex and identity gained added resonance once he passed, while Bowie’s philosophies of celestial consciousness elegantly telegraphed the cosmos, how does death put an elegant bow on Russell’s legacy? For a man who played with almost everyone in the ‘60s and recorded a whopping 31 albums of his own with the boisterous boogie-woogie of country life, it can’t.

So perhaps it’s best to understand the extent to which Leon Russell’s efforts are embedded in the story of American music.

You can hear his electric piano on The Byrds’ cover “Mister Tambourine Man”, and as Gene Clark sang on another Russell-backed tune, he had us on his trip right from the start. Russell’s piano keeps the bright organ and the backing rhythm tied together on a little Beach Boys song called “California Girls”, too. Elton John, Barbara Streisand, Frank Sinatra, Glenn Campbell, Doris Day, Willie Nelson, Badfinger, The Rolling Stones, the list goes on. Everyone in the game knew Russell, and they all felt a surge of energy whenever he sat down at the keys.

Russell’s larger-than-life command of his instrument conjured a sense of seriousness that his often playful lyrics and melodies toyed around with. As a co-writer of Gary Lewis and The Playboys’ “Everybody Loves a Clown”, his buoyant melody met the tragi-comedy of the tune with ease.

But when it came time to play bandleader, Russell didn’t fuck around. He learned both seriousness and style in the nightclubs of Tulsa, Okla., passing through Oklahoma City as a 14-year-old boy to make the trip, then lying about his age so he could play. There he cut his teeth with J.J. Cale in his first band, The Starlighters, and Jerry Lee Lewis brought him on tour. Russell also met Ronnie Hawkins in Tulsa. As a mentor, The Hawk taught him to jam years before he ever helped form The Band. Fortified by another unsung hero who merged the great American heartland with psychedelic grooves, Russell was unstoppable.

That image of Russell as The Mad Hatter was crystalized during his time as bandleader on the great Joe Cocker’s Mad Dogs & Englishmen tour, which eventually resulted in a smash live album that spoke equally to Russell’s mastery of the great American songbook as it did Cocker’s. Listen to Cocker and Russell groove through Leonard Cohen’s “Bird on a Wire” for a particularly Gospel-tinged take on the classic.

Russell recorded a great record with fellow session dude Marc Benno as The Asylum Choir in ’68, but that Joe Cocker tour put Russell in a prime position to release his masterful self-titled solo debut.

For personnel on his ’70 debut, he called upon his friends—Cocker, Jagger, Clapton, Winwood, all of the Beatles but Paul. For back-up singers, he borrowed some of Ike Turner’s “Ikettes.” That debut’s opener, “A Song For You”, went on to become Russell’s first hit, and has been covered by many, perhaps most famously by Ray Charles.

His versions of “I Put a Spell on You” and “Give Peace a Chance” that appeared on that record were no covers, but groovy originals, almost a joking comment on how much of his career he’d spent playing other people’s music. To listen to the gorgeous righteousness of “Hummingbird” flowing into “Delta Lady” is to receive the full boon of Russell’s gifts as a composer—songs as poignant and sincere as they are jubilant. Rolling Stone called his music “churchy.”

That interview with Rolling Stone reveals how much importance Russell placed on a “tribal” vibe to his music, which suggests why he was so good at keeping a band on the same page. “The audience is why they have rock and roll concerts, because that’s the only missing element in the tribal culture,” he said. “Well, an analogy to more primitive cultures would be—‘the only thing missing is the drummers.’ They’ve got the campfire, they’ve got the circle, but they just don’t have the drummers, and that’s where the rock and roll bands come in.

“The only thing that’s unfortunate about it is that for some reason or another, there’s no ritual. I mean, the ritual’s in the formative stages now. The tribe is just starting to recognize patterns in existence. In India the Indian music is essentially the same form as blues, in that it’s spontaneity within a certain restricted format. But in India it’s a religion, and the restrictions are known by everybody and they know what their participation is and it’s just like a way of life. Here everybody’s still seeking out the patterns, like the festivals are the closest thing I can see in our modern civilization because it’s the way for people to expend non-specific energies.”

Russell seemed to own these musings on 1972’s Carney, a loosely circus-themed collection of songs that broke him into the No. 2 album spot with its opening track, “Tightrope”—“I’m up on the tightwire/flanked by life and the funeral pyre/putting on a show for you to see.”

As an album, Carney is kind of all over the place, but the stylistic jumble fits the theme. “Out in the Woods” conjures Dr. John vibes more than “Cajun Love Song”, while “Manhattan Island Serenade” channels Randy Newman—you can hear Russell listening to his contemporaries while working out amazing songs in their mold.

Get past the 30 or so opening seconds of rain sounds in “Manhattan Island Serenade” and chew on how devastatingly fucking simple those lyrics are—“Sittin’ on a highway in a broken van/Thinkin’ of you again.”

As Russell kept cranking out the records, he continued challenging himself as a performer capable of many moods and styles, not just the turned-up celebration. Returning to his alias Hank Wilson a year later on 1973’s Hank Wilson’s Back, he rejoined with J.J. Cale and reminded those he grew up with that he could still kick out the country classics with ease.

“That’s the way I make my music, and that’s the way I prefer to live,” he told Rolling Stone, “instead of sitting around getting moldy—I’ve been doing that too much in my life already.”

By the time he recorded his 2010 duet album with Elton John, The Union, Russell’s health had been failing him and he had been out of the spotlight for a while, releasing cold and sterile MIDI music. John, who considered Russell one of his great mentors, repaid the favor to his teacher. Serving as the future connective tissue between John’s Tumbleweed Connection and Russell’s self-titled masterwork, The Union cemented his place in the canon. A year later, John inducted him into the Rock and Roll Hall of Fame.

So again we must ask, who will remember Leon Russell? Surely those who’ve played with him, and a fair share of baby boomers are aware of the magic that came with every key the man touched.

But will my generation take the time to discover the stories and the relationships that put this man at the center of some of American music’s greatest unions?

And if not, what does that say about our sense of nomadic musical tribalism today? 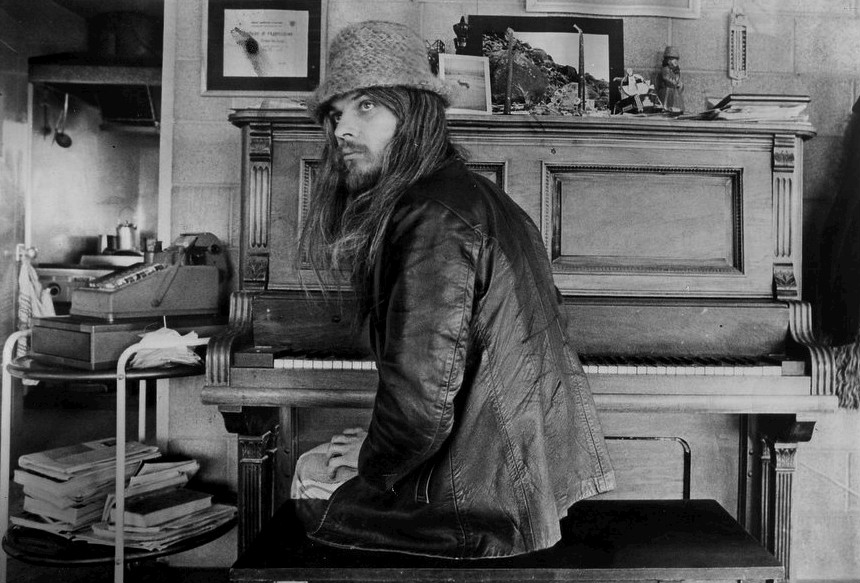