What began as a legal battle between the Sioux Tribe and the company building the Dakota Access Pipeline has turned into a movement that suggests something bigger is brewing.

Sunday night at Standing Rock in North Dakota, police injured as many as 300 protesters leaving at least one young woman in critical condition, and at least 26 people seeking medical care at nearby hospitals, according to the Standing Rock Medic and Healer Council. The police attack on an estimated 400 people included a barrage of rubber bullets, tear gas, concussion grenades, and pelts of icy despite the freezing temperatures. At least 16 people were arrested on Monday after continued demonstrations.

The Morton County Sheriff Department has taken an unapologetic stance on the use of less-lethal force. In a Facebook post today on the county’s official page, Sheriff Kyle Kirchmeier said, “We’re just not going to let people or protestors in large groups come in and threaten officers, that’s not happening.” At local press conferences in recent weeks, Chief and Sheriff spokespersons for the county consistently depict the protesters as “rioters” who throw rocks, set things to fire, dismantle barricades and overall, “threaten control and order.”

For months, the North Dakota Access Pipeline has been protested by the Standing Rock Sioux tribe and members of nearly 100 other tribes from across the United States. Many non-Native activists have joined as allies, including environmentalist and founder of 350.org Bill McKibben, who is urging the American public to pay attention by reporting through his personal twitter page.

Over 300 cities around the world have joined the resistance in protest and outspoken solidarity. The refrain of the protest is simple: clean is not a political issue. It’s a right—a global human right.

In 2015, NASA’s satellite data revealed that 21 of the world’s 37 large aquifers are severely -stressed. The UN estimates one fifth of the world’s population already lives in -stressed conditions. The New York Times recently reported that the Department of Housing and Urban Development will give grants totaling $1 billion in 13 states to help communities adapt to climate change, by building stronger levees, dams, and drainage systems. From the contaminated drinking in Flint, Michigan to the escalated urgency of the North Dakota Access Pipeline protests, this reality means problems surrounding clean access are not likely to fade away quietly.

The outcome of this battle, and the way it gets told, may set the stage for similar environmental and humanitarian disputes yet to come.

For members of the Standing Rock Sioux Tribe, the pipeline is a major environmental and cultural threat. In addition to trampling over ancestral lands, they are concerned a break near the Missouri River could pollute the reservation’s supply.

In A Language Older Than Words, author and environmentalist Derrick Jensen posits:

“Does anyone really believe that a pattern of exploitation old as our civilization can be halted legislatively, judicially, or through any means other than an absolute rejection of the mindset that engineers the exploitation in the first place, followed by actions based on that rejection? This means if we want to stop the destruction, we have to root out the mindset.”

In this resistance movement calling for people to “wake up and rise up,” the indigenous tribes are asking the public to consider a worldview that reflects intimacy with their habitat. It has everything to do with language. For Energy Transfer Partners, the Texas-based energy giant responsible for planning the pipeline and completing construction, the phrase “extraction of resources” is standard practice. But for spokespeople from the Sioux, who appear regularly on Democracy Now, this phrase connotes “murder of Mother Earth.” The conflict for them rests firmly on the notion that this is yet another trespass sanctioned by the state against the Native American way of life.

And the Sioux are not alone among indigenous people in pushing for the rights they’ve long been denied. Tribes coming from the Brazilian Amazon seeking an American audience, too, are asking the public to do more to protect their way of life.

In October, the Yawanawá Tribe of the Brazilian Amazon canoed, drove, then flew from the deep Amazon, to Miami then to New York. For many of the members, it was their first time out of Brazil. They performed music to a crowd of over a hundred at the Tibet House. The proceeds from their musical tour of five major cities goes towards building a school to teach younger members of the tribe the Yawanawá language and skills to steward the land.

Their musical performance told the story of their disappearing ecosystem and language which belongs to the Panoan language family. Linguists estimate that approximately 1250 people speak it fluently.

Unlike the Standing Rock Sioux, and many of the tribes indigenous to the United States, the Yawanawá were not historically relocated by their government. There are 800 Yawanawá still living in eight villages on the banks of the Gregorio River. But younger generations are losing connection to the ancestral land and culture, opting to adapt to city life in hopes of greater economic gain.

In the case of the North Dakota Access Pipeline, sacred ancestral land and clean drinking is at stake. In the case of the Yawanawá, two million square miles of rainforest in the Amazon are now under threat from deforestation. Both tribes are at odds with the dominant economic system.

The goal to pass on the Yawanawá language is intentional because it contains a relationship unique to their land base. There is a documented correlation between the number of human languages present in an ecosystem, and the number of thriving animal and plant species. According to National Geographic, one language dies every 14 days. By the next century, nearly half of the roughly 7,000 languages spoken on Earth will likely disappear, as communities abandon native tongues in favor of English, Mandarin, Spanish or in the case of the Yawanawá, Portuguese. What more is lost when a language is exterminated?

Cayte Bosler is a Brooklyn-based freelance journalist who has contributed to The Atlantic, National Geographic, and Fast Company. You can find her on Twitter @caytebosler and Instagram at cayte_b 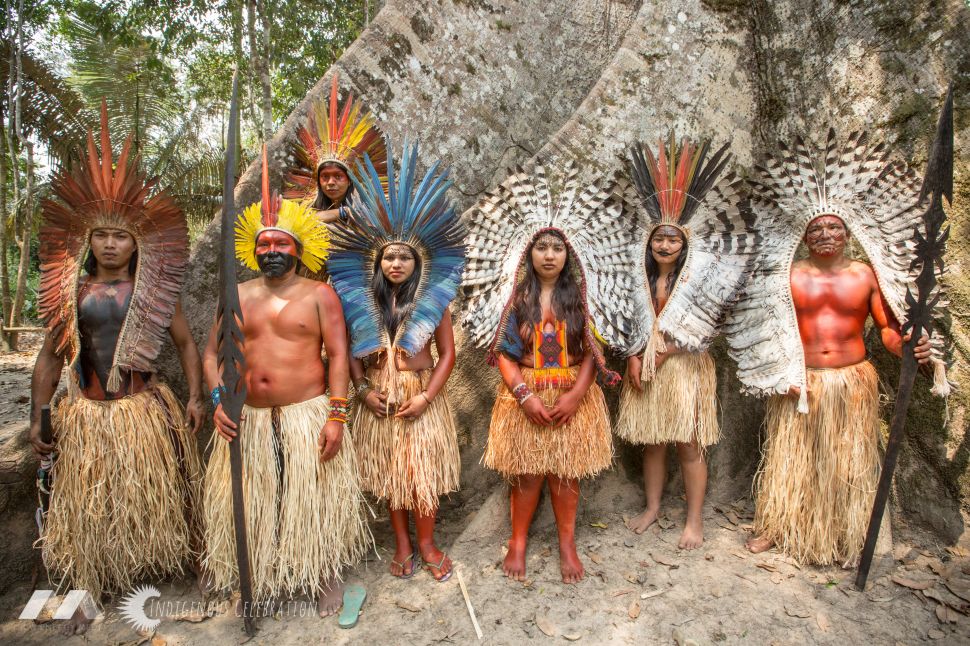