That exchange between two teenagers, probably aged no more than 16 was one of many at the Jacob K. Javits Center, during last weekend’s Sneaker Con event. Elsewhere about 20 minutes later, an even younger guy was spotted considering a $200 purchase while wearing an “I Feel Like Home” Kanye West tee. On the other side of the floor, a girl was haggling with one of the 300 vendors over a pair of kicks.

“They’re not on back order no more,” she argued. “They aren’t sold out, I can go order them online right now. I’m not paying that.” This was the sneaker market brought to life.

The New York edition of the traveling sneaker convention Sneaker Con is the show’s flagship. With upwards of 20,000 people expected to pass through the event’s entry lines this past weekend, it has come a long way from its 2009 launch in a 2,000 square foot Times Square space that only hosted 600 attendees. Now, the convention boasts 13 shows a year in cities like Atlanta, Chicago and Fort Lauderdale with the next on December 10 in Charlotte, North Carolina. Accordiing to Sneaker Con founder, and co-founder of SoHo’s sneaker boutique Stadium Goods Yu-Ming Wu, Washington, D.C. is building up to be a sizable show behind NYC.

“People come here for all purposes surrounding sneakers,” Wu told Observer Sunday, looking out over the convention floor. “They are here to browse, to buy, to sell, to trade. One of the bigger reasons is it’s one of the friendliest environments for sneakerheads to gather with likeminded people.” In practice that makes for attendees (mostly in their teens) milling around, some with dufflebags or backbacks slung over their shoulders, advertising what they have to sell or trade. They would hold one of the shoes in their hands, or some even balanced them on their heads while its mate was tucked safely away. Wearing streetwear minded brands like VLONE, Pigalle, Supreme and Virgil Abloh’s OffWhite as well as designs from Kanye West ventures — Yeezy Season 3 ripped knits as well as Life of Pablo and pop up shop merch were the most recognizable and seemed ever present— they shouldered past each other to get to various vendors or the much frequented Trading Pit.

“We are mostly teens,” Wu explained when the age of the participants is pointed out. That said celebrities like Fat Joe also make it out — the rapper ended up buying a pair of Yeezy 750s and Melo 2s. “We have some older guys, we have a few adults and parents but when you look on the floor, it’s 60 to 70 percent teens. We curate a show that serves them. We are not creating an environment for 21 and above; we aren’t in a nightclub, we are not playing loud music, we are not serving alcohol. We want to create a friendly and safe environment for these teens. This is the only show on the planet that caters to teenage boys.” But don’t think that means that serious business isn’t going down.

According to the convention, more than $3 million worth of merchandise was be traded or sold on the trading pit floor on Saturday and Sunday. That’s a lot of sneakers but vendors and sneakerheads alike came well prepared bringing stacks of cash or styles as new as the Nike Special Field Air Force 1 Urban Utility boot which just dropped Saturday, to hock. Amongst the most identifiable and available of sneakers on offer: Yeezy styles from Kanye’s work with Adidas, HU styles from Pharrell’s partnership with the Adidas NMD and a wide variety of styles from Jordan brand.

“When we first started the show, up until now in terms of trends, what we saw early on was Nike and Jordan brand definitely dominated,” Wu offered from his own observations. “But recently we’ve seen adidas penetrating this market really hard. We’ve seen also Saucony, Asics and reebok all penetrating but we’ve never seen adidas penetrate this hard.” Wu noted that entire tables would only offer adidas or the mix would be half adidas and half other brands; this hadn’t been seen before. Of those adidas offerings Kanye’s designs are a focal point. “Since he’s really been able to push off with his ideas and he’s gained more with his position, it’s become the new Jordan brand.” Particularly Wu was referencing adidas’ decision to form a new joint company with Kanye called Yeezy.

But it’s not just Kanye’s work with adidas that fetches top dollar. Rashed Saif Belhasa, a teenaged social media star who collects sneakers as well as exotic animals like tigers, was walking the floor after being connected to Wu himself prior. That introduction all started with the Belhasa’s purchase of a pair of $5,000 Red October Yeezys (Kanye’s Nike collaboration) that originated from Stadium Goods.  Another pair of Red Octobers have become the stuff of Sneaker Con legend. 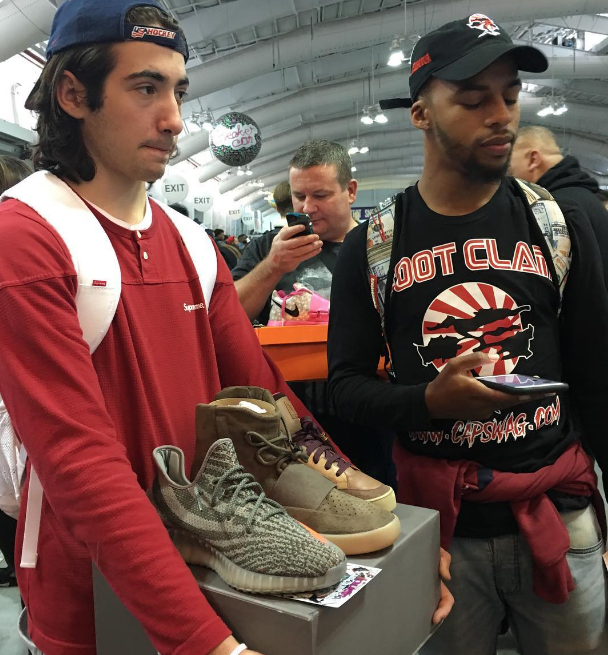 “Apparently some guy flew from Sweden to our Dallas show and came to buy one pair of sneakers,” Wu recalled. “He bought the Nike Air Yeezy 2 Red Octobers. They were signed by Kanye West and he paid in the range of $10,000. It was one of the most incredible trades or sales we have had.” And while that number is high for a pair of shoex, the event confirms that $1,000 purchase are quite normal and sales as high as $3,000 aren’t uncommon. 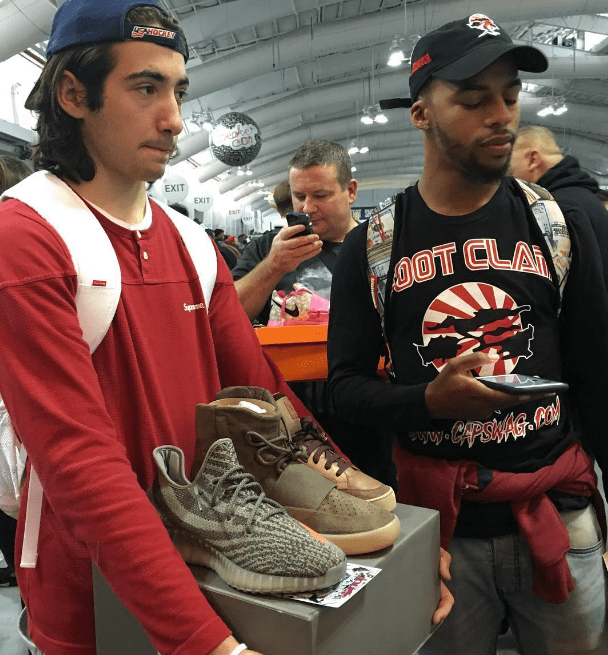