Rome, the Eternal City—the celebrated medieval painter and architect Giotto called it “the city of echoes, the city of illusions, and the city of yearning.” Reflecting upon those three aspects of the Italian capital, the Observer recently visited an exhibition at the American Academy in Rome, on view through November 27, 2016, that charmingly brings these features to light.

“A View of One’s Own—Three Women Photographers in Rome: Esther Boise Van Deman, Georgina Masson, Jeannette Montgomery Barron” presents the work of three foreign women from successive generations—an archeologist, a writer and an artist—who had very different approaches to photography and to documenting the Eternal City.

Drawn in part from the Photographic Archive of the American Academy in Rome, the exhibition documents the ancient city and its urban transformation over a hundred year period, from the turn of the previous century to the present day, while tracking the evolution of the medium of photography, from cumbersome equipment to handheld cameras and digital devices.

Esther Boise Van Deman (1862–1937) traveled to Rome in 1901 to study archeology at the American School of Classical Studies, an ancestor of the current American Academy. She was a pioneering American women archeologist, who is best known for establishing a method for dating Roman monuments through the analysis of building materials. A self-taught photographer, Van Deman documented Rome and its surroundings with a large-format camera to complement her study of the city’s architecture.

In the exhibition—cleverly curated by Lindsay Harris, Peter Benson Miller and Angela Piga—we see her pictures of the legendary Roman Forum, shot from above; the boat-shaped Tiber Island with its two connecting bridges; and people fashionably strolling past the ruins of the Temple of Mars Ultor, among other historical images. Her vintage, albumen prints are most often presented in shows related to scientific research, but Van Deman’s perceptive eye is surprisingly exposed in this exhibition’s aesthetic context.

Part of a generation that contributed to the interpretation of post-war Italy, Georgina Masson (1912–1980) was born in India to British parents. An autodidact, she’s most remembered as an author of historical biographies and travel books—her celebrated book The Companion Guide to Rome, which was initially published in 1965, is still in print, albeit updated now. Masson photographed Rome’s diverse neighborhoods, piazzas, churches and courtyards for the book’s series of walking tours.

“It was actually Masson’s book that gave us the idea on how to link the three photographers,” Peter Benson Miller told us during a walk-through the show. “She didn’t organize itineraries in Rome based upon historical periods and styles, but by neighborhoods. You encounter points of interest in a leisurely stroll, but in the process you run up against different buildings, one-after-another, and discover different styles, different periods.”

Included here are her black-and-white photographs of people dining at a café on the stylish Via Veneto; the Villa Medici’s circular fountain, one of city’s many features; architect Pier Luigi Nervi’s dynamic Palazzo del Sport, which was built for the 1960 Olympic Games; children watching a puppet show at the Villa Borghese; and the snow-covered, maze-like garden of the Palazzo Doria Pamphilj, where the bohemian Masson lived in a former stable. Using a handheld Rolleiflex camera, she captured the boom period in Rome—a time that most of us know through the classic American films Roman Holiday and Three Coins in the Fountain.

The only practicing artist in the group, Jeannette Montgomery Barron (1956–) has published several books and widely exhibited her black-and-white photographs that feature portraits of the New York art world in the 1980s, still lives made in collaboration with Pulitzer Prize winning poet Jorie Graham and psychologically charged images of mirrors. A 2007 visiting artist at the American Academy in Rome, she currently splits her time between an apartment near the Pantheon and a house in Kent, CT.

Documenting the Eternal City with her iPhone camera, Barron captures poetic pictures of contemporary life on the go to reveal the essence of Rome in details. A poster of the Spanish Steps at an airport coffee bar becomes a surrogate for the famous tourist site; an Old Master painting left outside a gated storefront suggests a wry mystery; and a red carpet going up a marble staircase points to a grandeur still evident in the onetime capital of the world.

Solely occupying one of the two rooms of the Academy’s gallery, her color photographs provide a kaleidoscopic view of the city, especially when displayed in a lively, salon-style hanging that’s familiar to Roman museums and palaces and in contrast to the rest of the show. Popping from the still photos is an iPad streaming a 10-minute loop of Barron’s short videos of her beloved Rome in daily motion—all conveying her knack for capturing the curious side of life.

“We think of Rome as an eternal city, where things are fixed and have been here for centuries,” Miller added. “But these three photographers are capturing a Rome that is changing—one for which things are not permanent and are continually being transformed or lost.” 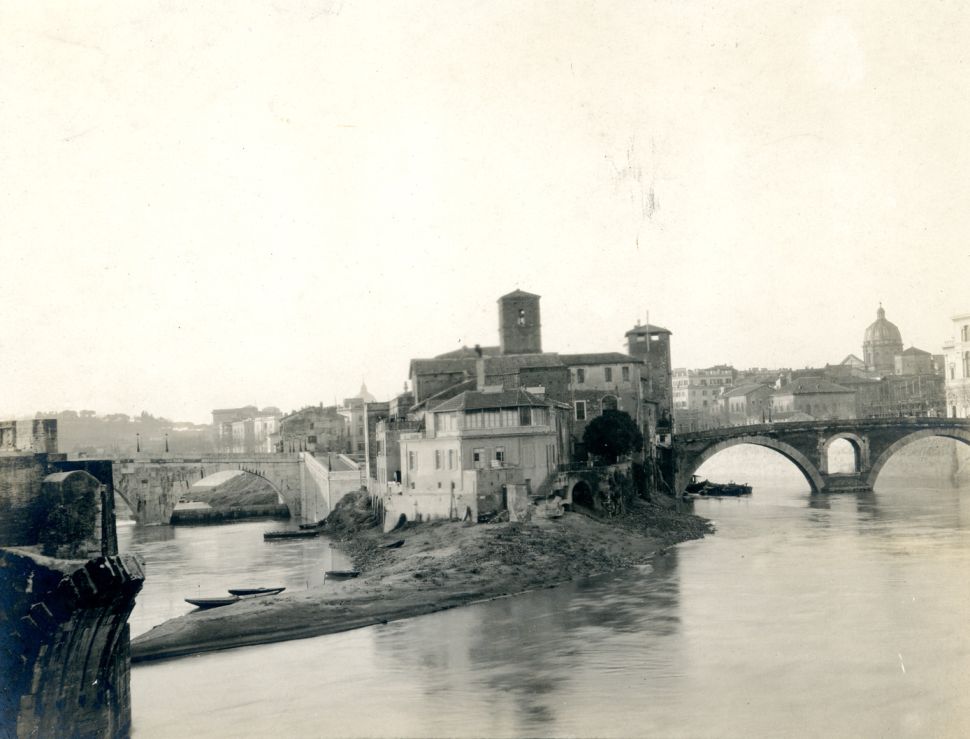