It’s not easy to satirize an election that’s involved everything from Skittles memes to Frozen picture books. But sketch comics and late night hosts still found plenty of fodder for comedy.

Here are some of the 2016 election’s funniest moments:

After 42 seasons, SNL proved to be as sharp as ever this election cycle. It began during the primaries, when Hillary Clinton and Bernie Sanders (played by a pitch-perfect Kate McKinnon and Larry David) squared off. McKinnon played HRC as a woman seething with ambition, rapping the Fresh Prince of Bel-Air theme to get the black vote and giving Sanders a noogie while asking if he “felt that Bern.” For his part, David made Sanders into a put-upon old man who “always talks like (he’s) on the other side of a river.” (This was also used to brilliant effect in a Curb Your Enthusiasm parody  appropriately called “Bern Your Enthusiasm“).

The fun continued during the general election debates, when McKinnon’s Clinton was joined by Donald Trump (Alec Baldwin, brilliant). While Clinton demonstrated how to pivot and listed her accomplishments over the last 30 years, Trump yelled about babies being ripped out of vaginas and said he loved the Mexican president “Mr. Guacamole and his wife Taquito.” He also bragged about “winning every single poll taken outside of a Cracker Barrel.” These jokes had extra bite given the SNL cast and crew was accused of pandering to the real Trump when he hosted the show last year.

An “Apology” from Melania Trump

Melania Trump was heavily criticized for plagiarizing portions of her speech at this year’s Republican National Convention from Michelle Obama’s remarks at the 2008 Democratic National Convention. So the next night, she (or rather, Tony-winning actress Laura Benanti) appeared on The Late Show with Stephen Colbert to apologize. After strutting out and executing a perfect model’s turn, Benanti proceeded to give a speech that lifted from Charles Dickens, Dr. Seuss, Braveheart, The Lion King, Network and the McDonald’s and Kit Kat jingles. Plagiarism isn’t funny, but this sure was.

Funny or Die: “Holy Shit, You’ve Got to Vote”

Using the songwriting skills she’s honed on Crazy Ex-Girlfriend, Rachel Bloom penned a hilarious, profanity laced-ditty warning that the US would “shoot itself in the face” if it elected an “orange talking STD.” She’s assisted by Moby on drums and Elizabeth Banks on bass, and the starry backup singers include Jane Lynch, Patti LuPone, Mayim Bialik and Jesse Tyler Ferguson.

Outside of the election, one of this year’s other big stories was the rise of the Broadway hit Hamilton. The Key of Awesome, a YouTube channel specializing in musical parodies, had the genius idea to put these two elements together by writing a version of the Hamilton opening number about Hillary Clinton. It’s not quite an endorsement—the characters (who include Bernie Sanders and Barack Obama) admit that she “shouldn’t be allowed online, though “at least she’s not orange, racist and rapey.” But in the end, they admit”she’s a badass bitch who gets it done, we could do worse.” The best musical parody of the election, by far.

A close second is this takeoff on a Bruno Mars hit, this time about The Donald. Rob Bartlett of the Imus in the Morning program plays Trump as he bemoans that “Hillary’s a fat load” and pleads with America to “take a look at my hands, they’re not so small.” In the end, he says that “Uptown Trump is gonna give it to ya.” It remains to be seen whether voters will give it to him.

A voiceover artist and seasoned political impersonator, Watson, like Kate McKinnon, has HRC down to a science. She appeared on Australia’s Today Show, complete with cough, several days after the real Clinton was treated for pneumonia. Watson-as-Clinton says she “reviewed about 7,000 old emails” while she was convalescing, and claims she should be president because she has a long-form birth certificate. She also says Trump shouldn’t have his “tiny little fingers near the nuclear codes.” 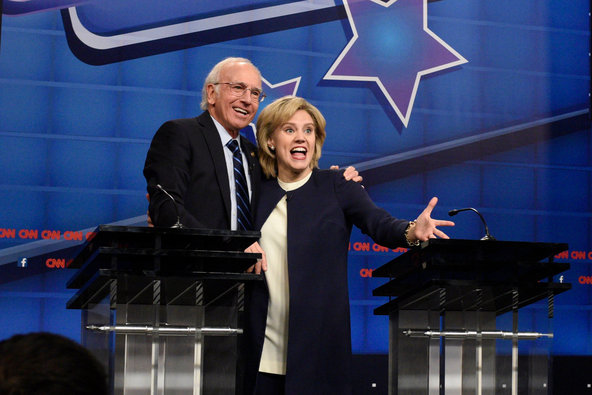